Future of War and Peace at Stake in Streets of Japan

The United States and European allies have launched wars on the Middle East creating an enormous refugee crisis. The same nations threaten Russia. The question of maintaining peace with Iran is on the tip of everyone's tongue. Even in Asia, Pacific and Africa, the biggest military buildup is by the U.S. So why does Japan, of all places, have streets full of antiwar demonstrations for the first time since the U.S. war on Vietnam? 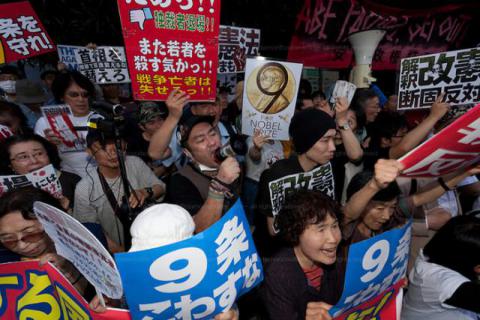 The United States and its European allies have launched wars on the Middle East that have created an enormous refugee crisis. The same nations are threatening Russia. The question of maintaining peace with Iran is on the tip of everyone's tongue. Even in Asia and the Pacific, not to mention Africa, the biggest military buildup is by the United States.

So why does Japan, of all places, have streets full of antiwar demonstrations for the first time since the U.S. war on Vietnam? I don't mean the usual protests in Okinawa of U.S. bases. I mean Japanese protests of the Japanese government. Why? Who did Japan bomb? And why do I say the future of war and peace in the world is at stake in Japan?

Let's back up a little. Japan went through a period of relative peace and prosperity between 1614 and 1853. The U.S. military forced Japan open to trade and trained Japan as a junior partner in imperialism, a story told well in James Bradley's The Imperial Cruise. The junior partner chose not to stay a junior partner, challenging U.S. dominance in World War II.

At the end of World War II, the war's losers in Japan and Germany were put on trial for an act that had been perfectly legal until 1928, the act of making war. In 1928, the global peace movement, led by the U.S. movement for the Outlawry of War, created the Kellogg-Briand Pact, a treaty that prohibits all war, a treaty to which most nations of the world are party today. This is a story I tell in my book When the World Outlawed War. President Franklin Roosevelt used the Kellogg-Briand Pact to create prosecutions of war.

Now, the general success thus far and in the future of the Kellogg-Briand Pact can be debated. It has prevented wars, it has stigmatized war, it has made war a crime that can be prosecuted in court (at least against losers), and World War III hasn't happened yet. But wars by wealthy nations against poor ones roll right along. The pact itself was of course never expected to abolish war on its own, a standard to which nobody ever holds any other law.

Japan, which had gone centuries without war, would go another 70 years. The U.S. Outlawrists of the 1920s never imagined their work being imposed on a conquered nation by a ruling general. But they might have imagined it being taken up by the Japanese people. If Article Nine was not clearly owned by the Japanese people themselves in 1947, it was in 1950. In that year, the United States asked Japan to throw out Article Nine and join a new war against North Korea. Japan refused.

When the American War (in Vietnam) came along, the United States made the same request of Japan to abandon Article Nine, and Japan again refused. Japan did, however, allow the U.S. to use bases in Japan, despite huge protest by the Japanese people.

Japan refused to join in the First Gulf War, but provided token support, refueling ships, for the war on Afghanistan (which the Japanese prime minister openly said was a matter of conditioning the people of Japan for future war-making). Japan repaired U.S. ships and planes in Japan during the 2003 war on Iraq, although why a ship or plane that could make it from Iraq to Japan and back needed repairs was never explained.

Now, at U.S. urging, Japanese Prime Minister Shinzo Abe is attempting to formally throw out Article Nine, or to "reinterpret" it to mean its opposite. And the Japanese people, to their everlasting credit, are in the streets defending their constitution and their culture of peace.

Meanwhile, the people of the United States, with some 50% of their popular movie entertainment (by my unscientific estimate) based around a good-and-evil drama of World War II, are not only not in the streets. They're not even in touch with the world. They have no idea this is going on. And if, 50 years from now, a heavily militarized Japan attacks Hawaii, the people of the United States will continue to have no idea how that happened.

Now, in fact, not later, but right now, would be a good moment in which to wake up and value what Japan has achieved. Now would be an ideal moment in which to remember that Japan's Article Nine was already and remains the law of the land in our other nations through the text of the Kellogg-Briand Pact. Let's start obeying the law.

* Much credit to David Rothauser for his film Article 9 Comes to America, and for being my guest next week on Talk Nation Radio.

David Swanson is an author, activist, journalist, and radio host. He is director of WorldBeyondWar.org and campaign coordinator for RootsAction.org. Swanson's books include War Is A Lie. He blogs at DavidSwanson.org and WarIsACrime.org. He hosts Talk Nation Radio. He is a 2015 Nobel Peace Prize Nominee.