Jeremy Corbyn has been elected leader of the British Labor party, in a stunning first-round victory that dwarfed even the mandate for Tony Blair in 1994. The election of the anti-war activist and rank and file Member of Parliament means the Labor party now has one of the most leftwing, anti-establishment leaders in its 115-year history. Minutes after his victory, Corbyn said the message is that people are “fed up with the injustice and the inequality” of Britain. 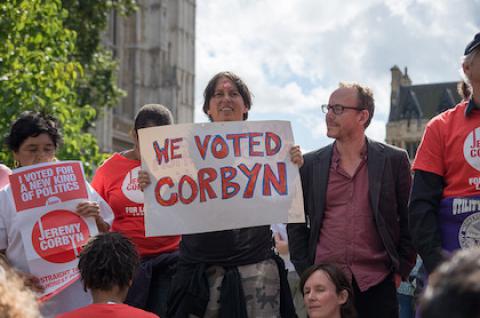 Jeremy Corbyn supporters gather in London to hear the results of the Labor leadership contest which Corbyn won by a landslide., The Weekly Bull

Jeremy Corbyn has been elected leader of the British Labor party, in a stunning first-round victory that dwarfed even the mandate for Tony Blair in 1994.

He won with nearly 59.5% of first-preference votes, beating rivals Andy Burnham, who trailed on 19%, and Yvette Cooper who received 17%. The “Blairite” candidate Liz Kendall came last on 4.5%.

Minutes after his victory, Corbyn said the message is that people are “fed up with the injustice and the inequality” of Britain.

“The media and many of us, simply didn’t understand the views of young people in our country. They were turned off by the way politics was being conducted. We have to and must change that. The fightback gathers speed and gathers pace,” he said.

The north London MP is one of the most unexpected winners of the party leadership in its history, after persuading Labour members and supporters that the party needed to draw a line under the New Labor era of Blair and Gordon Brown.

Attention will now turn to who serves in Corbyn’s top team, with MPs such as John McDonnell, Angela Eagle, Sadiq Khan, Ken Livingstone and possibly leadership rival Burnham tipped for key roles. Liam Byrne, Mary Creagh and John Healey have also indicated they would be willing to serve on his frontbench.

He faces the task of constructing a broad-based shadow cabinet, pulling out of his major TV interview with Andrew Marr on the BBC on Sunday to start the process. However, within two hours it was clear that Rachel Reeves, Emma Reynolds, Tristram Hunt, Chris Leslie and Liz Kendall as well as Cooper would not serve his leadership. Jamie Reed, a shadow health minister, published his resignation letter on Twitter while Corbyn was still delivering his victory speech.

Having been catapulted from a little-known member of parliament to leader of the opposition, Corbyn will now set about apologising for the Iraq war and strongly opposing cuts to public services and welfare. He began his leadership on Saturday with a speech to a rally in London in support of refugees.

Addressing the party’s new members who helped propel him to victory, he said: “Welcome to our party, welcome to our movement. And I say to those returning to the party, who were in it before and felt disillusioned and went away: welcome back, welcome home.”

Corbyn also launched a forthright attack on the media, saying its behaviour had been at times “intrusive, abusive and simply wrong”.

“I say to journalists: attack public political figures. That is ok but please don’t attack people who didn’t ask to be put in the limelight. Leave them alone in all circumstances,” he said.

In generous tributes to the other candidates, he applauded Burnham for his work on health, Kendall for her friendship during the campaign and Cooper for helping to shape the political narrative on Britain taking more refugees.

The new leader concluded by saying the poorest were suffering a terrible burden of austerity and have seen their wages cut or are forced to rely on food banks under the Conservatives.

“It’s not right, it’s not necessary and it’s got to change,” he said. “We go forward as a movement and a party, stronger, bigger and more determined than we have been for a very long time ... We are going to reach out to everyone in this country, so no one is left on the side, so everyone has a decent place in society.”

Throughout his speech, Corbyn stressed that he would be inclusive, in comments designed to allay the fear of centrist MPs that they may no longer have much of a place in his party.

Former leader Ed Miliband broke his silence on the contest to appeal to the new leader to reach out to all sections of Labor “because he has a big job to do to unite the party”. He said he would be offering Corbyn his support but has turned down the chance to be part of the new shadow cabinet.

“Jeremy has won a very clear victory in all sections. I believe we should respect that mandate,” Miliband said. “The task of the leader is to reach all parts of that movement and I believe that’s what Jeremy should do. It’s about the fact that right across our party they voted for Jeremy Corbyn. It’s a massive opportunity for our party.”

Corbyn’s victory is all the more remarkable because he started as the rank outsider, behind rivals Burnham, Cooper and Kendall, and only scraped on to the ballot paper when about 15 Labour MPs lent him their votes in order to widen the debate.

Initially, the odds of him winning were around 100-1, but his campaign was boosted when he won the support of two of the biggest unions, Unite and Unison, and became the only candidate to vote against the Conservatives’ welfare bill while the others abstained.

Corbyn’s campaign has also been helped by a surge in new members and supporters who paid £3 to take part in the vote, leading to a near-tripling of those eligible to about 550,000 people. Throughout the campaign, he addressed packed rallies and halls, where he had to give speeches outside the buildings to crowds gathered in the street.

While his supporters will be jubilant about Labor taking a turn to the left, his triumph will be deeply disappointing to the parliamentary party, which overwhelmingly backed other candidates by 210 to 20.

Despite talk over the summer among Labor MPs about the possibility of challenging Corbyn’s election, this threat to his authority appears to have somewhat dissipated. Labor has been severely criticised for its chaotic handling of the contest, after Miliband introduced the new system whereby new supporters could pay £3 to take part in the vote.

It meant the party had to scramble to weed out infiltrators from other parties and many members complained about not getting ballot papers. All camps, however, have ruled out mounting a legal challenge to the result.

During his three decades in parliament, Corbyn has spent much of his time championing causes such as the Stop the War coalition, campaigning against the private finance initiative and supporting peace efforts in the Middle East.

In the campaign, he promised to give Labor members a much greater say in the party’s policymaking process, in a move that could sideline MPs. His key proposals include renationalisation of the railways, apologising for Labor’s role in the Iraq war, quantitative easing to fund infrastructure, opposing austerity, controlling rents and creating a national education service.

He is also likely to prove an obstacle to David Cameron’s ambition to launch airstrikes on Syria, although some Labor MPs could defy the whip to vote with the government.

[Rowena Mason is a political correspondent for the Guardian.]