The comedian sneaked politics and policy—along with Captain America and Oreos—into his CBS debut. 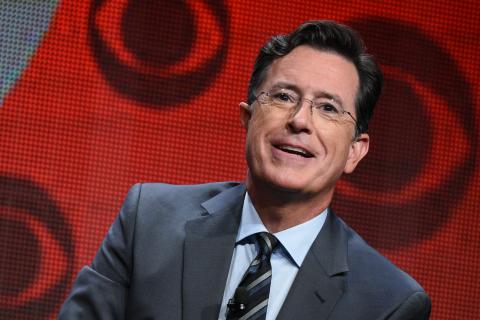 , Richard Shotwell
On the debut of The Late Show with Stephen Colbert Tuesday evening, the host dedicated a few minutes of his hour-long inauguration to giving his audience a tour of his new set. There was his Captain America shield, a nostalgic holdover from the set of The Colbert Report. There was “an ancient cursed amulet” that would, in due time, force Colbert to do on-air plugs for Sabra Roasted Red Pepper Hummus (“Scoop up the fun!”). But there was also, placed on a shelf, the pennant that his mother had gotten, Colbert said, while attending Martin Luther King Jr.’s 1963 “I Have a Dream” speech. The host gazed at the piece of his family’s—and his country’s—history, and took a beat. “Sadly, civil rights only won the pennant that year,” he said. “Racism won the World Series.”
Which: whoa. “Racism won,” right off the bat! This is not the typical stuff of formula-ridden late-night comedy. And while it’s silly to assess a show, especially a late-night comedy show, on its premiere—jokes and gags will be tweaked; hosts will adjust their deliveries; things will inevitably evolve—it’s notable, right off the bat, how much of a departure that little World Series line represented. It’s notable, too, how many other little lines did the same thing. If last night’s Late Show was indeed indicative of the Late Shows to come ... viewers, and late-night comedy, might be in for a shake-up.
On the surface, Colbert’s debut stayed (mostly) true to the established formula of The Late Night Talk Show: the be-suited host, the peppy band, the monologue featuring jokes both topical and less so (oh, hey, Ashley Madison punchline), the eager studio audience, the interviews with celebrity guests. Colbert tweaked the formula a bit—his suit was cobalt blue rather than the typical dark blue or black; his band was peppier than most; his desk more comically large than usual. Also, he danced! And he sang! And he ate Oreos!
But he also talked, explicitly, about politics. (The Oreo-eating was in fact part of a weirdly sophisticated joke comparing addictive junk food and Donald Trump.) He chatted with his brother, in the audience for the occasion, about their amiably differing political views. He had Jeb Bush as a guest, and asked him the kinds of questions that political reporters have traditionally asked—why he’s running, what he thinks his brother got wrong (“I think he should’ve brought the hammer down on the Republicans when they were spending way too much,” Bush replied). Colbert also got the presidential candidate to utter a phrase that may well go down in political lore: When he asked the Bush brother about his much-mocked “Jeb!” logo, Jeb explained, delightfully dryly: “It connotes excitement.”
To an extent, of course, none of this is new or noteworthy. These weren’t deep policy questions. And politics and late-night comedy have long been happy, if occasionally awkward, bedfellows. Clinton, saxophoning with Arsenio. Bush, chatting with Leno. Obama, chatting with ferns. But Colbert was, in subtle but significant ways, different. He wasn’t treating Jeb as a celebrity, giving him an easy opportunity for free, and content-free, media; he was treating him as a person who is running for political office. He was actually interviewing him. He was trying to have a conversation with him about things that directly affect people’s lives. (Same, to some extent, with George Clooney, Colbert’s first guest: The two talked about acting and movie-making, but they also talked about Darfur.)
You could think of all that as a kind of mission creep, politics seeping into entertainment; you could also, though, think of it as entertainment making its way into politics. Productively. Part of Donald Trump’s popularity has to be explained by his refusal to acknowledge a distinction between the two. And part of why politics has become so polarized, while we’re at it, is likely that we’ve come to see the workings of government as things that exist separately from the rest of our lives. The sociologist Pablo Boczkowski talks about the reluctance many people have to talk about politics in a work environment, where such discussions can create unnecessary acrimony; instead, we silo ourselves, discussing the issues of the day, for the most part, with people we know will pretty much agree with us.
That’s not a good thing, for people or for democracy. And Colbert’s latest debut suggested that late-night comedy might actually play a role in fixing it. The guest list for Colbert’s upcoming shows includes—along with the actors and comics you’d expect—Stephen Breyer, Bernie Sanders, and Ban Ki-moon. Those guests, my colleague David Sims noted, are “surprisingly highbrow.” They are also surprisingly political. And intellectual. They are the guests not traditionally of Letterman and Kimmel and Fallon, but of Charlie Rose. And that may well be meaningful. The Colbert Report, after all, was notable not just for its satire, but for its intellectualism: It introduced its audience to authors and thinkers who might not get an airing on typical late-night, or for that matter typical news, shows. The Late Show’s debut suggested that Colbert might carry on that tradition, expanding it to a wider audience. It suggested a proposition that, until last night, seemed as absurd as it is simple: that late-night comedy, aired on a large network, can be funny and smart at the same time.