The Times buried the real story: active collusion between the agribusiness and chemical industries, numerous and often prominent academics, PR companies, and key administrators of land grant universities for the purpose of promoting GMOs and pesticides. 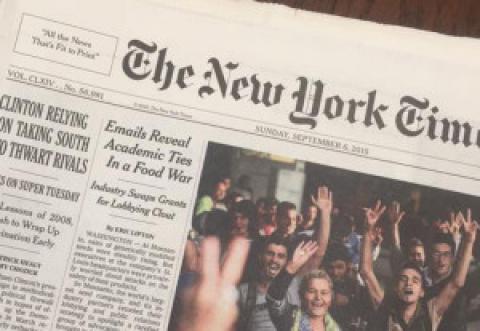 “Reading the emails make(s) me want to throw up” tweeted the Food Babe after reading a lengthy series of them posted online by the NY Times on Sept 5th. The emails in question result from a Freedom of Information Act (FOIA) request and are posted in the side bars of a front-page article by Timesreporter Eric Lipton (“Food Industry Enlisted Academics in G.M.O. Lobbying War, Emails Show”). The article is highly disturbing, but, as the Food Babe implied, the Times buried the real story. The real scoop was not the perfidy and deceit of a handful of individual professors. Buried in the emails is proof positive of active collusion between the agribusiness and chemical industries, numerous and often prominent academics, PR companies, and key administrators of land grant universities for the purpose of promoting GMOs and pesticides. In particular, nowhere does the Times note that one of the chief colluders was none other than the President of the American Association for the Advancement of Science (AAAS).
All this is omitted entirely, or buried in hard-to-notice side bars, which are anyway unavailable to print readers. So, here is the article Eric Lipton should have written.
First, The Lipton Story
The Lipton article seems, at first sight, to be impressive reporting. Lipton describes how Kevin Folta, Chair of the Dept. of Horticulture at the University of Florida secretly took expenses and $25,000 of unrestricted money from Monsanto to promote GMO crops. On behalf of the biotech industry, or via the PR firm Ketchum, Folta wrote on websites and attended public events, trainings, lobbying efforts and special missions.

Parts of this were already known, but Lipton digs up further damning evidence and quotes from Folta. They include an email to Monsanto that solidly contradicts Folta’s previous denials of a relationship with Monsanto and the biotech industry: “I am grateful for this opportunity and promise a solid return on the investment,” Folta wrote after receiving the $25,000 check, thereby showing both a clear understanding of his role and the purpose of the money. The article goes on to similarly expose Bruce Chassy (Prof Emeritus, University of Illinois) and David Shaw (Mississippi State University). It also discussses, presumably for “balance”, agronomist and GMO critic Charles Benbrook, then at Washington State University, who unlike the others openly acknowledged his funding.

Your right to know
Let me speculate at what is really going on behind the scenes of Lipton’s article.
Earlier this year, a newly-formed US group called US Right to Know (USRTK) set in motion Freedom of Information Act (FOIA) requests directed at 14 (now 43) prominent public university scientists it suspected of working with (and being paid by) the biotech industry and/or its PR intermediaries. Now, if these 43 academics had nothing to hide, this request would not have attracted much attention and hardly any emails would have been forthcoming. However, the USRTK FOIA requests triggered a huge outcry in various quarters about the “harassment” of public scientists. The outcry has led to OpEds in the LA Times and the controversial removal of scientific blog posts defending USRTK, and much else besides, as reputedly tens of thousands of emails (from these FOIA requests) have landed on the desks of USRTK.
What would a good PR company to recommend to its clients in such a situation? In order to preempt the likely upcoming firestorm, it might recommend that various media outlets run ahead of USRTK to publish a version of events in which academic small-fry like Kevin Folta, Bruce Chassy and David Shaw (of Mississippi State) are the villains. Making them the fall guys lets others off the hook: high-profile scientists like Nina Fedoroff and Roger Beachy; the pro-biotech academic community in general; and prestigious Ivy League institutions like Cornell University.
These much bigger fish are who the NY Times should have harpooned. Since they did not, or perhaps would not, let us hope that USRTK will make better use of those emails, ideally by posting all of them online.
Footnotes
(1) Others Professors cc’d into emails include : Peter Davies (Cornell), Carl Pray (Rutgers), Tony Shelton (Cornell), Peter Phillips (University of Saskatchewan), Prabhu Pingali (Cornell), Elizabeth Earle (Cornell), Peter Hobbs (Cornell), Janice Thies (Cornell) and Ann Grodzins Gold (Syracuse), Martina Newell-McGloughlin (UC Davis).
(2) Later published as  A. K. Wilson, J. R. Latham and R. A. Steinbrecher (2006) Transformation-induced Mutations in Transgenic Plants: Analysis and Biosafety Implications. Biotechnology and Genetic Engineering Reviews  23: 209-237
References
Altpeter F. et al (2005) Particle bombardment and the genetic enhancement of crops: myths and realities. Molecular Breeding 15: 305–327.
David Quist and Ignacio H. Chapela (2001) Transgenic DNA introgressed into traditional maize landraces in Oaxaca, Mexico. Nature 414: 541-543