film Town Without Pity: Richard Gere Goes Homeless and Dares You to Watch

Centered in the homeless community in New York City, 'Time Out of Mind ' makes no excuses for Hammond's (played by Richard Gere) homelessness, and it avoids the Hollywood trick of pretending he's a man wronged, that in his case there's been a mistake. Instead, it asks us to accept him as a man, period, one of the millions who have found no purchase in the economic systems we're born into. 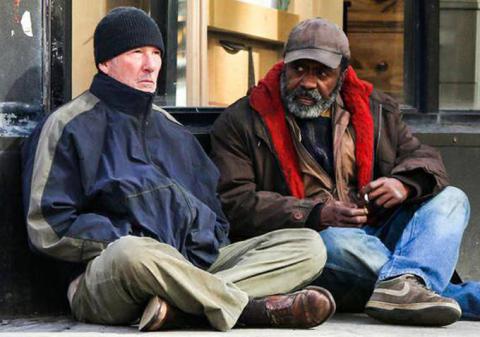 Richard Gere and Ben Vereen in 'Time Out of Mind', blog.indiewire.com

The good news about the Richard Gere drama about the bad news of New York's enduring homeless crisis?

Time Out of Mind, written and directed by Oren Moverman, is stubbornly, respectfully unflashy, Manhattan neorealism steeped more in reportage than in the clichés of prestige films. A prideful man slow to admit that he needs help, Gere's George Hammond shuffles through the city in an abashed silence, sometimes muttering to himself, or insisting to the cops and hospital orderlies who hustle him along that he's just between opportunities — that he's not homeless homeless. Moverman's script has been stripped of poetry, speeches, or anything that might play well in an Oscar-night montage. Once in a while, when pressed by a social worker or a friend at a shelter, Hammond will crack open a little, surprising himself: "I'm a fuck-up," he'll say, pitilessly, and that's just about all we get to know about the life he once had, other than crucial little clues the film leaves it to us to pick up.

Patient and mournful, Time Out of Mind makes no excuses for Hammond's homelessness, and it avoids the Hollywood trick of pretending he's a man wronged, that in his case there's been a mistake. Instead, it asks us to accept him as a man, period, one of the millions who have found no purchase in the economic systems we're born into. (His spectacular handsomeness? That you just have to run with.)

So Gere's Hammond slumps along, stealing a couple of hours of shut-eye on a bench until drunk dudes chuck a bottle his way. He shakes his head, at first, when a nurse directs him to a shelter: He insists his situation's not permanent, even as he makes no clear efforts to change that situation. Movies preach the bootstrap gospel, so his aimlessness can't help but alienate — but what steps could he take, when he can't even get together the paperwork to secure the ID he needs to register for social services? That's why it's a terrific relief when he scrapes up cash enough for a couple of beers. He gulps them down in a park, letting loose a Pacino-like bleat — at last, he seems to feel alive.

The power of Gere's performance is cumulative. Few moments stand out, because he is playing a man who would prefer not to stand out at all, a man who seems to shy away from the camera in his own movie. At first, this makes the film difficult — how rare it is for a narrative feature to ask you to stick with a lead who shrinks from you, who has no clear goals or articulated desires. As the days slip past, and Hammond hustles up and down Manhattan trying to scrounge food and a snatch of peaceful sleep, Moverman achieves a rare transference. In a way, the viewer is tasked with becoming the protagonist: It is we who are supposed to grow, to change, to learn to see the homeless as individuals in need of much greater assistance, rather than as a scourge.

Time Out of Mind is an experiment in empathy, an examination of bureaucracy and streetlife mundanity, and a movie that many will find a tough sit. This is art that resembles its subject: Ever wanted to know what it would feel like to come to stew in a shelter while men scream at each other over nothing? To slog through the process of getting a bed there for the first time? To attempt to snooze outside in the city that never lets you sleep? The vision of Gere's face, bathed in the lights of emergency vehicles, is potent, as is Felix Andrew's scarifying sound design, which honors the aggrieved and profane chatter that is to late-night New York what crickets are to the country.

It's a welcome moral project to depict the homeless onscreen as something other than jokes, cautionary examples, or Terry Gilliam's sages and crazies. Moverman's aesthetic project is not always as strong. Again and again, he and director of photography Bobby Bukowski film Gere through shop windows, fences, and train doors, complicating not our broader view of the story but our very ability to see it. Entire scenes pass with us watching Gere's image in the reflection on a TV screen or slabs of city glass, and some long shots become logic puzzles: Instead of being pulled into the moment, and marveling at how the city has circumscribed every aspect of Hammond's existence, I instead got caught up in trying to work out where he was in relation to the camera, where the camera was in relation to whatever mirrored surface it was focused on, and where the reflected taxis and buses layered over everything were in relation to that. And why the sniper's-eye view from another building of Hammond's meeting with a social worker?

The movie is commanding despite its flourishes. Its second half lightens with the introduction of Dixon (the excellent Ben Vereen), a chatterbox from the shelter whom Hammond comes to pal around with. Bickering, like beer, gives him reason to keep plodding. Jena Malone frowns through several scenes as Hammond's estranged daughter, a bartender who refuses to offer more than incidental help — it's clear in her eyes that she's tried to do more for him in the past, and that it has never worked. The final shot is an extended beauty, tinged with just as much hope as this movie can bear, but what lingers is more painful: the dull inhumanity of the systems we trust to help the people we don't look at. Moverman and Gere demand you look.

Time Out of Mind opened in theaters aound the country on September 11th.

[Alan Scherstuhl is film editor at The Village Voice. He also covers books, music, and other matters for the Voice, in addition to writing Studies in Crap, his ongoing humor column about bizarre books and ephemera found at junkshops.]