Young Activists Getting Results--In Chicago, Across the Nation

From Ferguson, Mo., where the "Black Lives Matters" movement took off, to the South Side of Chicago, where Fearless Leading by the Youth launched the trauma center campaign, young people are leading the call for justice. And increasingly across the country, they are strategically amplifying their message to get results. 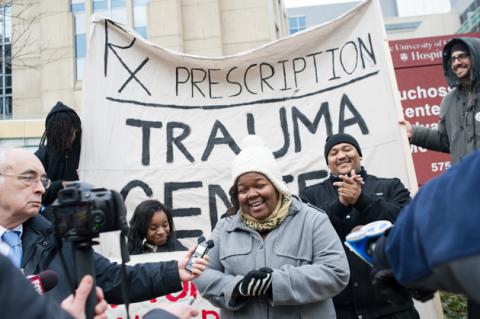 For more than five years, the determined group of young people has demanded that University of Chicago Medicine open a trauma center on the South Side.

They marched through the streets with makeshift coffins. They used a metal pipe to barricade an office door, locking university workers inside. They disrupted an alumni gala. And they blocked a construction site on the Hyde Park campus, binding themselves together with bungee cords and locking themselves to a fence.

Then they leveraged the University of Chicago's victory in securing the Barack Obama Presidential Center to gain a national audience to get an adult trauma center for the South Side.

These are the hardball tactics of the modern-day movement for civil rights and equality, according to those familiar with social protests.

And they're getting attention.

From Ferguson, Mo., where the "Black Lives Matters" movement took off, to the South Side of Chicago, where Fearless Leading by the Youth launched the trauma center campaign, young people are leading the call for justice. And increasingly across the country, they are strategically amplifying their message to get results.

U. of C. Medicine announced Thursday that it would partner with Sinai Health Systems to operate a trauma center for the South Side, culminating a lengthy standoff with a multiracial coalition of young professionals, students and community members who refused to back down.

Officials at U. of C. Medicine said the decision to invest $40 million in a new trauma center at Holy Cross Hospital in Marquette Park was in response to a need in the community, not a result of the protests. But the demonstrators claimed victory and vowed to continue fighting for medical parity in low-income communities.

"We've been relentless. It's not that all of a sudden people decided to listen to activists," said Veronica Morris-Moore, 23, co-founder of Fearless Leading by the Youth. "People didn't think young black people could come together and wage a national movement. We built power and … political officials have started to see we can't keep ignoring people."

While young people have long been involved in activism, from anti-Vietnam War protests on college campuses to the civil rights movement of the 1960s, more of them are at the forefront now. Some critics, though, say their tactics can be reckless, for example, they shut down elevators in a university building, trapping disabled people inside.

Today's movements have had an easier time delivering their messages and recruiting supporters, said Michael Kazin, a professor at Georgetown University and an expert on social movements.

Part of the reason, he said, is because as people continue to feel the pain of the recession, they relate more to the struggles of the poor and marginalized. With the help of social media, their message spreads at a faster pace than in earlier times when activists were at the mercy of the news media to give them a national spotlight.

"Since the Great Recession began, there is a sense that things aren't going right in the country," Kazin said. "There was Occupy Wall Street that forced us to look at wage equality. There is the $15 minimum wage movement that has forced a conversation about pay. And Black Lives Matter has accelerated a dialogue about policing in African-American communities and poor communities."

Chicago has a long tradition of organizing and resistance, according to Barbara Ransby, a University of Illinois at Chicago professor of history and African-American studies.

"There is no single reason for the upsurge," she said in an email. "Many grievances have been simmering for years, including plummeting wages, a city polarized by wealth inequality, the abandonment of public education, gentrification and unchecked police violence. Activists have petitioned and testified, written letters and rallied, the new heightened level of protest represents impatience with the city's inaction."

Ransby cited as examples of escalation the Dyett hunger strike and recent disruptions of police review board meetings by Black Youth Project 100, a national activist organization for 18- to 35-year-olds.

"Through social media and conventional media, the world is watching the struggles by poor people and people of color in Chicago, and many are taking inspiration from the courage and determination of Chicago activists," she said.

In the case of Dyett and the trauma center, there was one large inducement hanging in the balance — the presidential library.

As the city basked in the glow of winning a presidential library, the spotlight spilled over onto everything from crime to economic disparities in the predominantly African-American community.

The Barack Obama Foundation is in the process of selecting a site in Jackson Park or Washington Park for the library, which is slated to open in the next five years. Dyett High School is located inside Washington Park.

The fight over a trauma center goes against the narrative of what the Obama library will stand for, according to Benjamin Hufbauer, a presidential library scholar and associate professor at the University of Louisville.

"It was in the best interest of the university to get this off the table before the library comes," said Hufbauer. "Part of the idea is that the library will have a positive impact on the community. The lack of emergency medical care runs counter to that story. It's not part of the positive change message."

Young protesters seized the opportunity to use the Obama library as a much-needed jolt to push their agenda into the national spotlight.

"This took tons of planning," Morris-Moore said. "Any action that has ever taken place, Fearless Leading by the Youth planned it out vigorously through a process of brainstorming and sitting in meetings asking: Where are we at in our strategy? What needs to happen to push our message forward? And then we created practices and ways to portray our message to a bigger audience."

Charlene Carruthers, 30, national director of the Black Youth Project 100, which is based in Chicago, said the victories are the result of years of planning and working behind the scenes.

"When you see people chain themselves outside of buildings or get arrested, that is not happenstance," she said. "These are tactics that people sat in a room and planned. Because that's what gets the message out there."

Morris-Moore said one of the biggest challenges that young people still face is having a voice in the negotiations.

"Our best way to get our foot in the door basically was to kick it down," she said. "We want other young people that come behind us to not have to do that. We want them invited to the table."