After four years as a growing, thriving voice of Walmart workers, the Organization United for Respect at Walmart (OUR Walmart) re-launched itself on Thursday. Founded and funded by the United Food and Commercial Workers Union, OUR Walmart will now rely more heavily on a coalition of 20 community-based partners. OUR Walmart will not attempt to gain union recognition, but continue its fight for $15 an hour minimum pay and improved working conditions and protections. 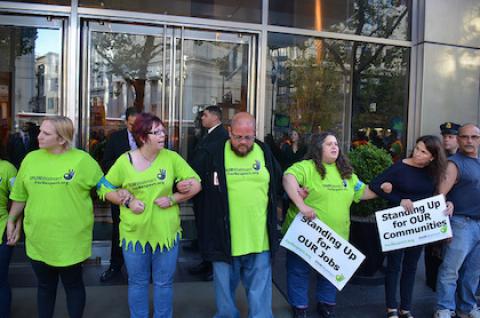 After four years as a growing, thriving voice of workers at Walmart, the Organization United for Respect at Walmart (OUR Walmart) re-launched itself on Thursday.

Originally a legally independent, non-union worker organization that the United Food and Commercial Workers founded and funded, OUR Walmart will now have a different, still to-be-defined tie to the UFCW—which will continue to publicize how Walmart as an employer and a business presence within most American communities has pushed down work standards and often taken from communities as much as it contributes.

The re-launched organization will rely more heavily instead on a new coalition of 20 partners, such as National People’s Action, Demos, Working Families Party, Interfaith Workers Justice, Color of Change, Jobs With Justice, Environmental Action and other groups, in addition to seeking funding from other sources, including foundations such as ARCA, that are not part of the formal labor movement.

Its goals remain much the same as before: $15 an hour minimum pay; full-time, consistent hours; no more unfair “coachings” (a Walmart form of discipline) and terminations; and action by the company to improve racial justice and women’s rights and to “address climate change.”

Likewise, it will not attempt to gain recognition as a union. OUR Walmart regularly issues a disclaimer that its purpose is to help Walmart employees deal with the company about labor rights and standards but that it “has no intent to have Walmart recognize or bargain with OUR Walmart as the representative of its employees.”

Walmart has a long history of swift, heavy-handed action against any attempt by workers to organize a union, including closing stores or store departments that voted in favor of a union and sending in anti-union specialists from headquarters to overwhelm any incipient organizing. That prompted a search for alternative ways for workers to come together.

“Originally our thinking was that labor has given up lots of its power by living inside the idea that the only way workers could have a union is if the employer permits it or the government blesses it,” Dan Schlademan, a co-director who helped to start OUR Walmart, said in an interview with In These Times this week. “We threw that concept out. We weren’t going to wait for the government or Walmart. The goal now is a worker-supported, sustainable organization of and for workers.”

Until they complete a re-assessment of their internal organization, OUR Walmart will continue to be run with a board consisting of five workers and the two directors, with the advice of a larger council of workers and dependence on not only 10 current full-time organizers but also a network of “leaders” in more than 2000 Walmart stores in every state and members who pay $5 a month in dues.

Workers participate in “peer-to-peer” networks on the internet, mainly through Facebook. Whatever its limitations, this loose arrangement seems to provide more opportunity for direct worker-to-worker communication beyond the immediate workplace than the usual union structure that is more mediated by elected officials.

Schlademan says the group will build out from this peer-to-peer network foundation to support workers with common, pressing problems that are less immediately related to the workplace (such as problems with debt, common among the company’s low-paid “associates”), training leaders more about worker rights (matching the level of union stewards), and investigating new technological possibilities beyond its Facebook communication.

OUR Walmart, Schlademan says, will also try to learn more from the experience of community organizations as well as from labor unions and non-union worker organizations (such as many of its new partners, including the Restaurant Opportunities Center and the National Domestic Workers Alliance). He thinks OUR Walmart may also be able to learn from worker groups, including unions, which operate under challenging conditions, such as where it is difficult to win majority support or anti-worker laws block traditional organizing to win contracts.

“We want to take the best of both labor and community organizations to develop into a singular organization that will be transformative … for OUR Walmart and for worker organizations in this country,” he said.

Compared to most unions, Schlademan envisions OUR Walmart as relying less on staff and more on self-organization of workers by workers, some of whom may function as part-time paid organizers. Also, since Walmart continues to fire workers who are leaders or fight for rights of fellow “associates,” OUR Walmart wants to be able to turn such attacks into ways of strengthening the organization and workers’ resistance to Walmart fear campaigns.

“Our main goal when a leader is fired is to support them in their fight to get their job back,” he said. “There are fired leaders with other jobs, some working on the campaign, and there’s a hardship fund for three months. Our goal is to turn every fired worker into an organizer.”

Despite Walmart’s continued attacks on the group and its supporters, OUR Walmart has not only survived but grown. “Walmart has been in full-on attack mode, but OUR Walmart survives and moves beyond where it was,” Schlademan said. “Each attack made the organization stronger.”

Schlademan estimates that the company has fired around 100 OUR Walmart leaders and tried to neutralize criticisms by spending large sums—$2.4 billion in FY 2014 alone—on public relations and advertising trumpeting Walmart as a great place to work.

Nevertheless, Walmart has had to make concessions to the pressure upon the business, mostly from OUR Walmart. It is in the process of enacting a series of wage hikes, starting with boosts to $9 an hour this year and $10 next year for a half-million of its lowest paid workers (out of 1.4 million), changes in scheduling policy, more accommodating pregnancy policies (after OUR Walmart’s “Respect the Bump” campaign).

But a new study from one of OUR Walmart’s think-tank partners, Demos, finds that even with the promised future raise to $10 an hour minimum, workers in every state would not earn enough to support the basic needs of even a single adult at the company’s normal “full-time” schedule of 34 hours per week. Yet Walmart continues a stock buy-back scheme that has expended tens of billions of dollars in recent years and has accomplished nothing but enrich a core group of shareholders.

How has OUR Walmart survived in the face of such a rich, powerful and hostile employer? Mainly with its flexible organization that workers identify as their own and the perseverance of leaders like Venanzi Luna, 36, an eight-year employee at what until recently was one of OUR Walmart’s strongest redoubts, a store in Pico Rivera, California.

During her four years as a leader, management disciplined her frequently, but she helped lead the first strike at a Walmart store as well as many other actions. “They play dirty,” she said. “You have to fight them all the way.” Partly that starts with education. “People ask, ‘How do you fight Walmart?’ I said, “With knowledge. OUR Walmart gave me a lot of understanding about how to fight for my rights,” including turning to unfair labor practice charges before the National Labor Relations Board.

The Pico Rivera workers are again turning to the law as well as protests to contest the recent short notice closure of the store (and four others with an active OUR Walmart group) supposedly for “plumbing problems.” “They laid off all of us,” Luna said. “They told us they will re-open in November but are not re-hiring anyone who has spoken up. That’s retaliation for exercising our rights. This is what really happens. A lot of people don’t believe it. For us it’s about associates fighting what Walmart does to us every single day. It takes a toll. Nobody should be treated like that. We’re not going to be stop fighting for what’s right. We associates have the ability to make Walmart better and make it treat workers with respect.”

For 15 years, Cynthia Murray has worked at a Laurel, MD, Walmart store, where fellow associates work hard, as she does, but management abuses them in ways that hurt not just the workers and the community but even Walmart itself, she says. A participant in earlier campaigns at Walmart, including a quickly quashed union drive, she became one of the founders of OUR Walmart.

Workers need an organization, she says, and OUR Walmart is what Walmart workers need now. “It’s a worker-led organization,” she says. “It’s the voice of workers inside the company—of and for the workers. We know what they have to say.”

Will OUR Walmart some day become a union with a contract and the standard structures and strategies of most American unions? Schlademan, as an organizer for ACTWU (clothing and textile union) and the Service Employees (in their Justice for Janitors campaigns), knows the strengths--and recognizes some weaknesses--of the model.

“Where will this end up?” he muses. “That’s a question of time. Now there’s a need for organization, and where that will lead is unknown. Now workers need a voice, rights at work, and the organization that OUR Walmart brings. My sense is that as you build organizations and workers learn the importance of organization and how to fight, they’ll never give that up. Where it goes, I don’t know.”

[David Moberg, a senior editor of In These Times has been on the staff of the magazine since it began publishing in 1976. He has received fellowships from the John D. and Catherine T. MacArthur Foundation and the Nation Institute for research on the new global economy. He can be reached at davidmoberg@inthesetimes.com.]