Vatican: Pope's Only 'Audience' Was With Gay Former Student – Not Kim Davis

Further distancing itself from Kentucky clerk Kim Davis, Vatican says Pope only had ‘real audience’ in Washington with a former student of the Pope and that student's partner. 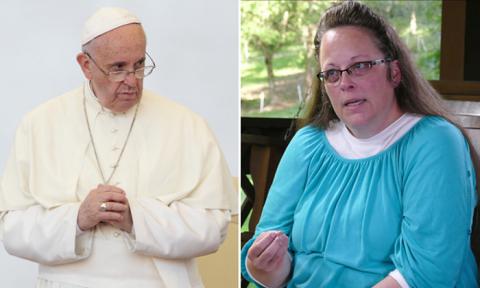 The Vatican has confirmed that the only “real audience” Pope Francis had while he was in Washington last month was with a gay former student and his longtime partner – a day before the pontiff met Kim Davis, the Kentucky clerk who was jailed for refusing to grant same sex couples marriage licenses for religious reasons.

On Friday, the Vatican sought to distance itself from Davis, saying in a statement that her encounter with the pope did not represent an endorsement of her opinions or actions.

Hours later, it confirmed that the only “real audience” Francis had while he was in Washington was with a former student, his partner, mother and his friends.

“Mr Yayo Grassi, a former Argentine student of Pope Francis, who had already met other times in the past with the Pope, asked to present his mother and several friends to the Pope during the Pope’s stay in Washington,” said Vatican spokesman Father Federico Lombardi.

Grassi, 67, a caterer in Washington has known the pope since Francis taught him literature and psychology at a Buenos Aires high school in the 1960s.

Grassi told the New York Times that he had contacted the Vatican for an audience but then reconsidered when he realized how busy the pope would be. Francis then called Grassi personally, saying he wanted to give him a hug.

“It was a private meeting, for about 15 to 20 minutes, in which I brought my boyfriend of 19 years,” he said. A video that was posted online showed Francis hugging Grassi and others.

The news that the pope had met a gay couple as well as a high-profile opponent of gay marriage underscored how the Vatican has struggled to come to grips with the controversy over Davis, which caught the church off guard and threatened to overshadow what was an otherwise successful trip to Cuba and the US.

Reports of the pope’s encounter with Davis had disappointed many liberals, and seemed to contradict the overall tone of the message the pope was trying to send on his US tour.

Initially, the Vatican refused to acknowledge the meeting with Kim Davis. Then it confirmed the meeting took place but said it would not discuss details.

But under mounting criticism – and with a speed unusual for an institution which normally moves at a glacial pace – the Vatican on Friday attempted to regain control of the narrative.

Saying it wanted to provide an “objective understanding of what transpired” at the meeting, the Holy See also went out of its way to minimize the significance of the encounter, saying Davis was one of “several dozen persons” who had been invited by the Vatican’s ambassador to the US in Washington.

“The pope did not enter into the details of the situation of Mrs Davis and his meeting with her should not be considered a form of support of her position in all of its particular and complex aspects,” the Vatican said in a statement.

In contrast, the pope’s meeting with Grassi was described as an “audience” – a planned, even formal encounter.

Now, there are questions surrounding the future of the Vatican’s envoy to the US, Archbishop Carlo Maria Viganò, the papal nuncio. Viganò was the man who initially arranged the Davis meeting, perhaps unaware of the storm of controversy it would create, or perhaps eager to reinforce the church’s views on gay marriage.

While the Vatican is staunchly opposed to gay marriage, the church’s decision to distance itself from Davis, as well as news of the pope’s meeting with Grassi, will inevitably be viewed by some proponents of LGBT rights as important gestures. At the very least, the Vatican clearly does not want to be seen as linking arms with such a divisive figure.

The pope in 2013 said “who am I to judge?” when asked about the existence of a “gay lobby” within the church, but he has otherwise not made any big public gestures that would be seen as extending tolerance toward gay Catholics.

Conservatives who saw the meeting with Davis as a victory following the pope’s tour of the US are likely to be very disappointed.

News of the meeting between the pope and Davis was met with shock among many progressives and non-Catholics, but also with puzzlement, because the pope had appeared to go out of his way to avoid hot button issues like gay marriage and abortion.

In the US, Davis has been hailed by religious conservatives as a symbol of the Obama administration’s alleged war on religious freedom. But for others, she is seen as an anti-gay bigot.

Francis had allegedly told Davis to “stay strong” in his meeting with her, according to reported comments by her attorney, and gave Davis and her husband two rosaries.

But now the Vatican has essentially put any lingering questions about the pope’s views about Davis to rest, suggesting that she was not necessarily a model of the pope’s views on “conscientious objectors”. On the plane home from Philadelphia, Francis had been asked about the Davis case, although the journalist asking the question had not mentioned her by name.

At the time, Francis did not seem overly familiar with the case or with Davis – which seemed odd after it emerged that the two had met – but nevertheless reinforced the idea that he believed it was a human right of government officials to object to a duty if they believed it was against their faith.

While some papal experts had earlier concluded that the pope’s meeting with Davis represented an endorsement of her role as a conscientious objector – because she went to jail for five days after refusing to fulfill her duties – the author Michael Sean Winters dismissed those arguments.

In a piece published on Thursday and widely discussed among Vatican experts,Winters argued in an article for National Catholic Reporter that Davis was not, in fact, a conscientious objector, because she not only refused to grant marriage licenses in her office in Kentucky (even though same sex couples have the constitutional right to marry), but she also forbade clerks working under her to do so.

The author, who is an expert on Christian fundamentalism, also hinted at another dimension in the controversy: he noted, before the Vatican’s statement on Friday, that the story was “in the hands of Davis and the Falwell empire, neither of which have much knowledge of, nor institutional loyalty to, the Catholic church”.

It was a reference to the fact that Davis is evangelical, not Catholic, and Jerry Falwell, the late founder of the fundamentalist Christian right movement in the US.

On Friday, the Vatican followed his advice.