The US Food Sovereignty Alliance upholds the right to food as a basic human right and works to connect our local and national struggles to the international movement for food sovereignty. The Federation of Southern Cooperatives, primarily African-American farmers across the deep South, shares the prize with the Black Fraternal Organization of Honduras, Afro-indigenous farmers and fisher-people. The prize will be presented in Des Moines on October 14, 2015. 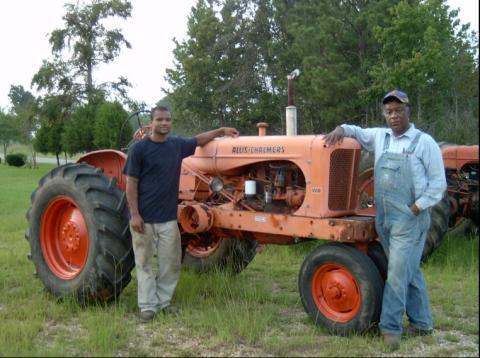 Ben Burkett on his farm in Petaluma, Mississippi, with his great-nephew. , Grassroots International.

The 2015 US Food Sovereignty Prize goes to two organizations that are demonstrating just how much Black lives matter, as they defend their ancestral lands for community-controlled food production. The Federation of Southern Cooperatives, primarily African-American farmers across the deep South, shares the prize with the Black Fraternal Organization of Honduras, Afro-indigenous farmers and fisher-people. The prize will be presented in Des Moines on October 14, 2015.

Food sovereignty goes beyond ensuring that people have enough food to meet their physical needs. It asserts that citizens everywhere must reclaim their power in food systems by rebuilding the relationships between people and the land, and between food providers and those who eat.  The US Food Sovereignty Alliance upholds the right to food as a basic human right and works to connect our local and national struggles to the international movement for food sovereignty.

The Federation of Southern Cooperatives strengthens a vital piece of food sovereignty: helping keep lands in the hands of family farmers. Its members are farmers in 13 Southern states, approximately 90 percent of them African-American, but also Native American, Latino, and White.

The Federation’s work is today more important than ever, given that African-American-owned farms in the US have fallen from 14 percent to 1 percent in fewer than 100 years. To help keep farms Black- and family-owned, the Federation promotes land-based cooperatives; provides training in sustainable agriculture and forestry, management, and marketing; and speaks truth to power in local courthouses, state legislatures, and the halls of the U.S. Congress.

Below are excerpts from an interview with Ben Burkett, an active member of the Federation. Burkett is also a farmer, director of the Mississippi Association of Cooperatives, president of the National Family Farm Coalition board of directors, and a member of La Via Campesina’s international board

“Our view is local production for local consumption. It’s just supporting mankind as family farmers. Everything we’re about is food sovereignty, the right of every individual on earth to wholesome food, clean water, air and land, and the self-determination of a community to grow and eat what they want.

“The Federation of Southern Cooperatives grew out of the civil rights movement [in 1967]. Racism is still here in the marketplace and in credit, but we have learned to deal with it and not give up on changing the system. We struggle every day to bring about a change.

“We recognize the natural flow of life. It’s just what we’ve always done. We want to go back to the way things were. It’s supporting mankind as small farmers and family farmers. It’s not so much a matter of making money, it’s a matter of carrying on so your farm will continue on. But you have to make some profit off it in order to keep it going.

"Myself, I’m a fourth-generation farmer on a farm that my great-grandfather homesteaded in 1889. That wasn’t but about 20 years after the end of slavery. He got 164 acres from the United States government. I still have the title – they called it a patent – signed by Grover Cleveland. And we’re still farming that same land.

“Some say the system is working. It appears to be working fine, but corporate agriculture is not sustainable. Our system of growing food is heavy, heavy, heavy dependent on petro-chemicals, on inorganic compounds, mostly petroleum-based. And then it takes too much control out of the local community. Now, it might last for several decades, but in the end it can’t last.

“You’ve got a few companies that want to control all the seed stock of the world, and they’ve just about got a handle on marketing three of the main commodities: corn, soybean, and cotton. [For us,] it’s hard to find seeds that aren’t treated with the Monsanto-manufactured Roundup Ready. I’ve tried to find cotton that wasn’t treated, but I couldn’t. Now they’re working on controlling wheat and rice.

“And they make those seeds so most of them don’t regenerate the next year anyway. But if you do save any of the seeds, Monsanto and the other companies are going to prosecute you for saving their property. Those seeds are patented, the property of the seed company, so they reserve the right to keep them. They’ll take you to court and make you pay back their money. Basically you’re just sharecropping for them, you’re leasing their seeds.

“I don’t think that’s fair. Once you’ve bought the seeds and planted them on your own land, it looks to me like they ought to be your own seeds. That’s the essence of life. Where did Monsanto and the other companies get their first seed from? Someone gave them to them. Those seeds didn’t fall out of the sky.

“We’ve been – I don’t want to use the word co-opted – trained by the institutions of agriculture, the companies, the university system, and technology, to give our rights over to the company, which I think is absolutely wrong. We have to be more proactive than reactive as small farmers, family farmers. We can’t wait for the government and large corporations to dictate to us what we can do in our region.

“They’ve got a unique way of buying you off to not fight here. The American consumer doesn’t care as long as it’s cheap. But no matter what farmers plant, the consumer’s got to change the system. People buying the end product have to complain. As long as they don’t complain, there’s no need even talking about it.”

The prize is given by the US Food Sovereignty Alliance, which is comprised of food justice, anti-hunger, labor, environmental, faith-based, and food producer groups. To learn more about the work of the Federation of Southern Cooperatives, please visit http://www.federationsoutherncoop.com/.