In Israel/Palestine: Witnessing the End of a Colonial Regime

What is happening in Israel today and what happened last week, last month, and for the past almost 50 years is about cementing sovereignty over land the international community agrees does not belong to Israel and over a subject people, the Palestinians, in contravention of international law. Yet, in Israel there is much talk about whether this is the start of the third intifada, but little talk of ending the occupation, the root cause of the escalating conflict. 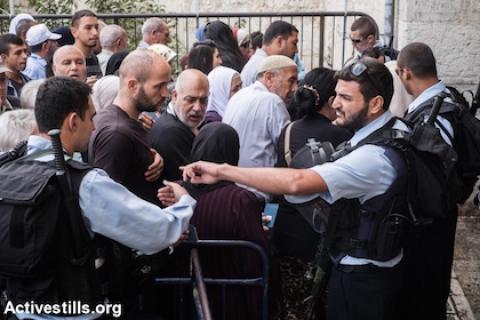 What is happening in Israel today and what happened last week, last month, last year, and for the past almost fifty years is about cementing sovereignty over land that the international community agrees does not belong to Israel and over a subject people, the Palestinians—all in contravention of international law.

I’m in Israel now, taking a break from the inanity and horrors of American politics, and watching the situation in Israel/Palestine heating up. Frequent topic in the Israeli press: is this or isn’t this the start of the third intifada? And, if it is, the discussion goes, how can Israel tweak the occupation so as to pacify the Palestinians? As for, how can Israel address the root cause—the very fact of the occupation—by decolonizing, well, that’s not part of the discourse.

My reaction is always the same when Palestinian youth, in particular, reach a breaking point. In 1987, with the outbreak of the first intifada, in Gaza, my first thought was that it was so long in the coming—that is, it took twenty years from the outset of the 1967 occupation of the Palestinian territories and the start of Israel’s illegal colonization of Palestine for the outrage to boil over.

In 1967, in the wake of the war, Theodor Merom, legal counsel for the Israeli Foreign Ministry, issued an unequivocal opinion for the government of Levi Eshkol, that moving Israeli civilians to settlements in the recently occupied territories would be a violation of international law, specifically, of the Fourth Geneva Convention. Further, Geneva IV is also explicit that military occupation as a result of war does not confer sovereignty over the territory for the occupier and that the occupation is by definition temporary. All of this was known to the Israelis in 1967. For all the protest to the contrary, including the (truly absurd) notion that the “deed” to Palestine was given to the Jews by god three thousand years ago (and therefore trumps Geneva IV?), the Israelis have not a leg to stand on. The Greater Israel project is illegal, full stop—a reality recognized by the international community. All of Israel’s current (Golan Heights, East Jerusalem) and future annexations cannot change that fact.

So here we are, thirty years after the outbreak of the first intifada, watching as the apartheid regime of land theft, including its colonization and repression of the occupied, rightless, stateless people needed to sustain the settlement project, with its 550,000 colonists, only grows. I consider each of those colonists, in both occupied East Jerusalem and the occupied West Bank, to be a stumbling block in the way of any possibility of peace.

The resulting Israeli routine for “managing” the conflict (that’s the Israeli concept), rather than finding a fair resolution, is more murder of Palestinians by the IDF, the Israeli police, and settlers (with essentially no accountability for the perpetrators), house demolitions, imposition of additional draconian laws, more Jew-only bypass roads, more closures, more arrests of children, more people held under administrative detention (no legal rights at all; forget about habeas corpus), and more restrictions on travel both within the occupied territories, as well as abroad. That’s only a partial list, of course.

Amira Hass nails it in her new article, “Palestinians are fighting for their lives; Israel is fighting for the occupation.” She eloquently and accurately outlines the situation and interprets it:

That we notice there’s a war on only when Jews are murdered does not cancel out the fact that Palestinians are being killed all the time, and that all the time we are doing everything in our power to make their lives unbearable. . . . When something in the war’s one-sidedness is disturbed, and Jews are murdered, then we pay attention.Young Palestinians do not go out to murder Jews because they are Jews, but because we are their occupiers, their torturers, their jailers, the thieves of their land and water, their exilers, the demolishers of their homes, the blockers of their horizon. . . . [T]he enemy they face proves every day that its malice has no limits. . . .

. . . Even the language is malicious. Jews are murdered, Palestinians are killed and die. Is that so?

This is the way of resistance to colonial regimes. Israel is simply another case study. Occupiers rule by the sword and expect the ruled to acquiesce quietly. The situation has played itself out historically around the world. Israeli colonization—both in the founding of the state itself and in the post-1967 Greater Israel project, the latter being the relevant point for most of the international discussion—was taking off just as the rest of the Western empires were reluctantly embarking on the business of decolonization. For its part, South Africa, with its apartheid regime, gave up (technically) in 1991, with the abolition of the apartheid laws, and then with the multiracial election of 1994. While it is true that, as Israelis never fail to remind, the Palestinian people are not led by a person of the stature of Nelson Mandela—who, it must be remembered, was imprisoned as a terrorist for twenty-seven years—more important, the Israeli people are not now, and have never been, led by a person of the stature of F. W. de Klerk (though granting that one cannot know where Rabin would have taken Oslo had he survived).

Netanyahu, a person of no stature (and admittedly only the latest in a long line of self-deluded ultranationalist Israeli leaders, including the leaders of the Labor Party), is bringing ruination on his country, alas, with the approval of most Israelis via his party and the other nationalist parties, regardless of what they call themselves (I include Herzog’s Zionist Union in this description). I concede Netanyahu’s “successes,” however: he has achieved his goal—reelection.

Back to Hass, who writes of the travesty of the reportage in the Israeli media:

Our worldview is shaped by the consistent betrayal by Israeli media outlets of their duty to report events, or their lack of the technical and the emotional ability to contain all of the details of the world war that we are conducting in order to preserve our superiority in the land between the river and the sea.

Not even this newspaper has the economic resources to employ 10 reporters and fill 20 pages with reports on all the attacks in times of escalation and all the attacks of the occupation in times of calm, . . .  The random examples we do manage to report are but a drop in the ocean, and they have no impact on the comprehension of the situation for a large majority of Israelis.

And I will add that this problem of reportage, by which the aggressors are too often presented as victims, is a travesty duplicated in much of the Western media. The New York Times, the newspaper of record, is, tragically, a case in point, certainly in its daily language. When will the Times view Palestinian blood as being as red as Jewish blood in terms of coverage? When will it stop referring to occupied East Jerusalem as something that Palestinians “want” as their future capital when it is internationally understood that that is a just resolution and that Israeli settlement of East Jerusalem is a nonstarter? (Israeli sovereignty over West Jerusalem is, of course, not in question internationally.) And how many puff pieces by Jodi Rudoren must readers of the Times have to stomach? On reading her article about Ayelet Shaked, Netanyahu’s latest justice minister, I found myself thinking that there’s no way a Times reporter covering a new neofascist minister in, say, today’s Hungary, would have produced an article like that. But Israel is different, and that’s the rub. The mainstream reportage is changing, to be sure, but far too slowly to keep pace with changing realities.

Can anyone say when the Israeli colonial project, dependent as it is on the suppression of a subject people in the name of the theft of their land, will reach its end? For sure not. Nor can we know exactly how it will end. But we can say that the realization abroad that Israel administers an apartheid regime is spreading, the proof being official Israeli panic over the matter. Eventually, the push from outside will be to replace the current apartheid system (entangled as it is with a massive web of settlements) with 1S/1P/1V—one state, one person, one vote—in all of Israel/Palestine. When that happens, the Jewish state, even in some benign cultural form that hypothetically could have evolved, will become history.

It may be hard for Israelis (and their best friends abroad) to digest the reality of the situation, but they fail to do so at their peril. The downfall of such regimes as colonial Israel often comes unforecast and without warning. Examples from recent decades should easily come to mind to those willing to pay attention.

The irony is that they are bringing that future on themselves.