Beyond Abbas and Oslo

The Oslo Accords have been a disaster for Palestinians and a boon to those who wish to maintain Israel’s nearly half-century-old occupation of the West Bank, East Jerusalem, and Gaza. In his U.N. speech, Abbas, one of Oslo’s architects, declared that he would no longer abide by its terms unless Israel stopped running roughshod over them. This declaration won’t mean much unless it’s translated into concrete action. 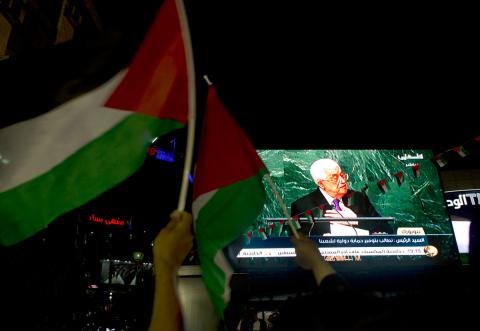 Last month, Mahmoud Abbas, the President of the Palestinian Authority, announced before the United Nations General Assembly that the twenty-year effort to establish a Palestinian state through the Oslo process had failed. This declaration was long overdue. The Oslo Accords, which were signed by Israel and the Palestine Liberation Organization and brokered by the United States, have been a disaster for Palestinians and a boon to those who wish to maintain Israel’s nearly half-century-old occupation of the West Bank, East Jerusalem, and Gaza. Their bitter fruits can be seen in the current upsurge in violence against Palestinians and settlers in the occupied territories.

Oslo was not designed to lead to Palestinian statehood or self-determination, in spite of what the P.L.O.’s leaders at the time appear to have believed. Rather, it was intended by Israel to streamline its occupation, with the Palestinian Authority acting as a subcontractor. In Oslo and subsequent accords, the Israelis were careful to exclude provisions that might lead to a Palestinian political entity with actual sovereignty. Palestinian statehood and self-determination are never mentioned in the text, nor were the Palestinians allowed jurisdiction over the entirety of the occupied territories. Israel’s intention is even more clearly visible in the expansion of illegal Jewish settlements in the occupied territories, which followed the start of the Oslo process. There were fewer than two hundred thousand Israeli colonists in the occupied West Bank and East Jerusalem when negotiations began. Now, according to the Times, there are about six hundred and fifty thousand of them.

The P.L.O. leadership, for its part, played a weak hand poorly. It failed to capitalize on the expertise that its delegation had accrued in Madrid and Washington in the two years prior, sending to Oslo inexperienced negotiators with little knowledge of the situation in the occupied territories or international law. As a result, Oslo reinforced rather than evened out the political imbalance between Israel, an undeclared nuclear power supported by the world’s sole superpower, and the Palestinians, a stateless people living under occupation or in exile. With the weight of the United States tipping the scales heavily in its favor—diplomatically, militarily, and through pressure on the Arab states—Israel was able to impose its will, entrenching an apartheid system in which millions of Palestinians live under military rule, with no rights or security, while Israel appropriates their land, water, and other resources. The only part of Oslo that was faithfully implemented, in fact, is the protection that the P.A. provides to Israel by policing its own people.

In his U.N. speech, Abbas, one of Oslo’s architects, declared that he would no longer abide by its terms unless Israel stopped running roughshod over them. This declaration won’t mean much unless it’s translated into concrete action, like dissolving the P.A. or halting cooperation between the P.A.’s paramilitary police and the Israeli army. There is no indication of either of these things happening anytime soon.

It is long past time to end the farce of a never-ending peace process that only increases Palestinian suffering. What is needed instead is a totally new paradigm, one based on a respect for international law, human rights, and equality for both peoples. As the Obama Administration has demonstrated with Cuba and the Iranian nuclear deal, taking a new and more just approach to long-standing, seemingly intractable problems can yield results. The same should be done with U.S. policy toward Israel-Palestine, despite the political pressure that is sure to be exerted by the Israel lobby to prevent any change to the status quo.

The American people are far ahead of their cowed politicians in this regard. A growing number of them—particularly young people, people of color, and progressives—oppose unconditional U.S. support for Israel. Last December, a poll conducted by Shibley Telhami, a professor at the University of Maryland, College Park, found that thirty-nine per cent of Americans support imposing sanctions or “more serious action” on Israel over its refusal to stop settlement construction. And according to a Gallup poll from February, although sixty-two per cent of all Americans would support Israel over Palestine if asked to choose sides, that figure has dropped ten points among Democrats since 2014. Senior officials in the party would do well to take heed.

The United States and the international community arm, financially underwrite, and diplomatically support the military regime that Israel has imposed on Palestinians. This external support, without which Israel’s occupation and settlement regime could not continue, needs to end if a just and lasting peace is to be achieved. Instead of delivering increased military aid to Israel—the country already receives the astronomical sum of three billion dollars a year, and President Obama promised more as consolation for the passage of the Iranian nuclear deal, which Israel’s prime minister, Benjamin Netanyahu, vociferously opposed—the United States could begin by making the aid conditional on respect for domestic and international law. This was recently called for in a letter to the State Department by Representative Betty McCollum, a Democrat from Minnesota.

It is time for American politicians and policymakers to stop hiding behind the fictions of Oslo. If they really wish to avoid more of the same, they must abandon bankrupt strategies and meaningless platitudes and act vigorously to end a system of military occupation and colonization that would crumble without their support.

Rashid Khalidi is the Edward Said Professor of Arab Studies at Columbia University and the editor of the Journal of Palestine Studies, and was an adviser to the Palestinian delegation at the Madrid-Washington Palestinian-Israeli negotiations of 1991-93. His most recent book is “Brokers of Deceit.”
Subscribe to Portside