The Man Booker prize, given annually for best English language novel published in the United Kingdom, was awarded this week to Marlon James, for his novel, A Brief History of Seven Killings. He is the first writer from Jamaica to win the prize. The novel is a tale of 1970s-1980s Jamaica, CIA plots, and violence. It is "a story about Jamaica that doesn’t only take place in Jamaica," says Kei Miller, who reviewed the novel late last year. 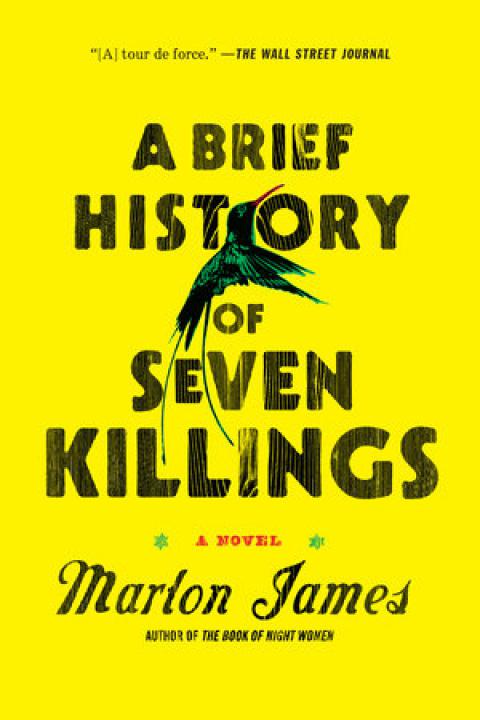 A Brief History of Seven Killings
A Novel

The Jamaican novelist Marlon James has written three books to date – a kind of triple-jump feat, though that metaphor isn’t quite appropriate when one considers the extraordinary length of the leap he has taken between each book. His first novel, John Crow’s Devil, established him as an interesting local writer with an imagination markedly different from that of other Jamaican and Caribbean writers; he relished the darkness and gore rather than the sunshine and bouncy music. But John Crow’s Devil, a small novel of hardly 200 pages, did not prepare anyone for what was to come next: The Book of Night Women.

Easily one of the best Jamaican novels ever written, The Book of Night Women, a slave narrative, is an incredible feat of plotting, pace and language. While it embraces a Jamaican dialect, it also established James as an international star. In every way, it is a bigger novel than John Crow’s Devil; epic in scale, and written with far more narrative power and lyricism.

James’s new novel, A Brief History of Seven Killings, tells the story of the attempted assassination of Bob Marley, who is referred to throughout as “the singer”, and its aftermath. But perhaps more importantly, it tells the story of Jamaica in the 1970s and early 80s, when the guns flooded in, CIA agents took up residence, and the island went through one of its most violently defining moments. It is a story worth telling, and a story about Jamaica that doesn’t only take place in Jamaica.

If one were to be curmudgeonly, one might say that A Brief History is slightly more impressive for its ambition than its accomplishment. In John Crow’s Devil and The Book of Night Women, the ambition and the accomplishment were perfectly matched. A Brief History, however, is sometimes more impressive than it is easily enjoyable – a difficult book with a stop-start structure that doesn’t quite sweep you up in the way the single narrative voices of the previous novels did.

Bakhtin saw the novel as the genre of polyphony, incorporating and orchestrating several competing voices. James seems to take this philosophy to heart, even extending it, and so in A Brief History of Seven Killings we find a novel of cacophony. The cast of characters presented at the beginning of the book totals around 75, several of them jumping in and out to tell their pieces of the story. The book brings together a variety of Jamaican experiences, which isn’t to say that these experiences are local or parochial.

James’s invented ghetto of Copenhagen City, where many of the book’s murders are plotted and take place, is worth a moment’s consideration. Though the ghetto’s name is an invention, it is reminiscent of actual places within the urban sprawl of Kingston, places such as Tel Aviv, Spain, Gaza and Angola – areas that exist within Jamaica but also refer to a wider world of conflict in which it participates. The names of some ghettoes, such as Tivoli Gardens, seem especially ironic, with the inspiration of the original being so far removed from the killing field the place has become.

So too, James’s Copenhagen City is no longer a peaceful Scandinavian landscape when it is placed in the hot tropics. James often brings the international within a national space. But most exceptional is his bringing together of a variety of Jamaican and American accents, and not for polite conversations, but to enter into the most brutal and bloody conflicts. In the wonderfully complex character of Josey Wales, we see James managing a range of language not only between characters but within a single character. Josey tells us of his meeting with CIA agents: “I don’t tell him that yo tengo suficiente español para concocer que eres la más gran broma en Sudamérica. I chat to him bad like some bush naigger and ask dumb question like, So everybody in America have gun? What kinda bullet American fire? Why you don’t transfer Dirty Harry to the Jamaican branch? hee hee hee.”

If the scope of James’s talent has grown from book to book, his imagination is more consistent – that tendency to inhabit the dark and gory places, and to shine a light on them. Despite its title, this isn’t a brief novel and neither are there a mere seven killings. Readers will flinch many more times than that. When reading reviews of Night Women, James apparently became bored with comparisons to Toni Morrison; and with A Brief History, he’s got bored with comparisons to Quentin Tarantino. But it is hard not to see the strength of that comparison. This is a novel that explores the aesthetics of cacophony and also the aesthetics of violence.

Kei Miller is the author of the poetry collection The Cartographer Tries to Map a Way to Zion.