The Campaign Against Rasmea Odeh

With the US government pressing for prison and deportation, Palestinian activist Rasmea Odeh needs our solidarity now more than ever. 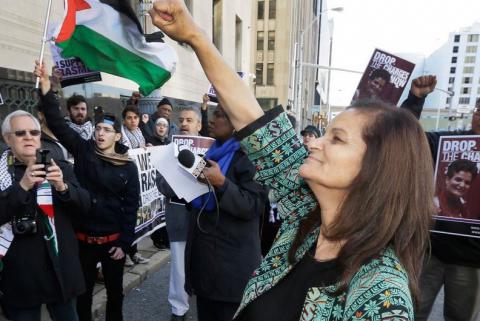 It’s clear to any Palestinian in the United States organizing for national liberation that they cannot count on the neutrality of the state. Nowhere is this clearer than in the government’s ongoing campaign against Rasmea Odeh.

A Palestinian by birth and a US citizen for over ten years, the sixty-eight-year-old Odeh was widely thought to have been targeted as a “consolation prize” for FBI investigators following the bureau’s inability to indict twenty-three Midwest antiwar activists who were subpoenaed to a grand jury in 2010 for their support for movements in Palestine and Colombia.

Odeh was not among those targeted in the synchronized house raids across Minneapolis, Chicago, and Grand Rapids. But her close colleague, Hatem Abudayyeh, executive director of the Arab American Action Network (AAAN), stood out as one of the more distinguishable names of the coterie sometimes referred to as the “Midwest 23.” The FBI then came after Odeh. A full three years after the raids occurred — and following surveillance and visitations — the FBI arrested and indicted Odeh for falsely answering questions on her 2004 US naturalization application.

What designates Odeh as such a threat in the eyes of the federal government is, in many ways, precisely what makes her Palestinian. She was but an infant when, after the 1947–48 war and Israel’s creation, her family was forced to flee their home in Lifta, an ancient Palestinian village located between Jerusalem and Jaffa, and resettle as refugees in the West Bank.

In 1969, Odeh and hundreds of other Palestinians were rounded up and arrested by Israeli soldiers and police following a week of resistance operations in the occupied West Bank. She was accused of being involved in two separate bombings allegedly carried out by the Popular Front for the Liberation of Palestine — one at a supermarket in East Jerusalem, and another at the British Consulate in Tel Aviv. Odeh, however, maintains that she was coerced into signing a false confession after being subjected to twenty-five days of unspeakable torture and rape — a well-documented, systemic reality for Arab prisoners.

Tried in a military court, Odeh was given a life sentence at the age of twenty-one. Ten years later, in 1979, she was released in exchange for an Israeli soldier captured during the invasion of Lebanon. She worked to help displaced Palestinians obtain United Nations humanitarian aid while living in Lebanon and Jordan, pursued her law degree, and eventually immigrated to Detroit in 1994 to care for her ailing father.

Her political work continued when she moved to Chicago in 2004 and began volunteering with the AAAN, advancing from volunteer to her current position as associate director. Consistent with the AAAN’s commitment to education and cultural outreach, she developed the Arab Women’s Committee within the organization, eventually establishing a six-hundred-strong female collective aimed at promoting leadership among Arab immigrant and Arab-American women.

As she testified during her trial this past November: “My focus was to let women be independent, strong — not dependent on public aid and not staying in the house; to share decisions that affect their lives. I did this while also going to school and working until five. I visited the women I worked with after work and took classes at night.”

This powerful work — and the consummate survivor behind it — is now in jeopardy. The government’s case against Odeh simply states that the non-native English speaker and torture survivor diagnosedwith chronic post-traumatic stress disorder (PTSD) failed to alert the Citizenship and Immigration Services of her previous conviction (under torture) in Israel.

For the crime of a simple “no” on her immigration forms, Odeh was essentially convicted all over again this past November in federal court. In March, she was sentenced to eighteen months in prison, to be followed by her deportation back to Jordan, where she hasn’t lived since 1994. Her appeal hearing is tomorrow in Cincinnati.

United States v. Odeh epitomizes the machinations of the networks fighting Palestinian liberation from within the US. Odeh was one of the first Palestinian women to publicly speak out against the use of rape as a form of torture by the Israeli military. Her indictment, the International Jewish Anti-Zionist Network argued in a recent report, seems to signal a “vendetta” by Israel and the US government against her “for the consistency and effectiveness of her life of activism on behalf of the Palestinian struggle and Arab communities in Chicago and more broadly.”

In the courtroom, cross-governmental cooperation made up the crux of the case, pursuant to the 1998 Mutual Legal Assistance Treaty Between the United States and Israel. And while prosecutors initially struggled to procure files from Odeh’s 1969 trial, Shurat HaDin, a legal group close to the Israeli government, expedited the process and secured thousands of supposedly relevant documents, hundreds of which were entered into evidence despite objections by Odeh’s defense that such documents and the officials that generated them were “not worthy of credit in a United States court.” (From 2011 to 2012, intermediaries of the Koch brothers earmarked a total of $675,000 for the coffers of Shurat HaDin.)

The judge that was originally assigned to Odeh’s trial, Judge Paul D. Borman, was outed by Odeh’s defense as a “life-long active supporter, fundraiser and promoter of the State of Israel” who with with his wife had gifted $3 million to the State of Israel over the course of twenty years and had been “instrumental in bringing hundreds of Detroiters to Israel,” including Michigan legislators.

Still, Judge Borman refused to recuse himself until he finally admitted that his family had “passive” financial investments in the Jerusalem supermarket Odeh was accused of bombing in 1969.

During the trial, the government sought an anonymous jury and other excessive measures — a response, it claimed, to Odeh’s supporters creating a “public, emotional and political atmosphere aimed at improperly influencing the jury.” As Nadine Naber detailed in January: “An average of thirty elderly women, mothers, and coworkers traveled by bus from Chicago to Michigan overnight to pack the courtroom in support of Odeh,” many of whom were present during prior hearings as well.

Judge Gershwin Drain rejected the request, but he did allow for a partial sequestration, meaning that the jurors arrived at an off-site location and were driven by federal marshals to the courthouse garage.

On top of everything else, Odeh was barred from testifying that she was tortured into a confession, an injustice that prevented her defense from using their initial argument that her chronic PTSD would have affected her ability to correctly process the immigration officials’ questions — a sound and scientifically accurate explanation, as confirmed by a clinical psychologist who closely observed her over a four-month period.

For decades Odeh has consistently maintained that she was physically and psychologically tortured by Israeli personnel. She says she was endlessly beaten, raped, electrically tortured, deprived of sleep, humiliated, and denied medical treatment, and was incarcerated for three months before seeing a Red Cross representative.

With Odeh denied the right to tell her story in court, her opponents — including the right-wing blog Legal Insurrection and theInvestigative Project on Terrorism (IPT), an Islamophobic watchdog group notably funded by the Koret Foundation, the Russel Berrie Foundation, and the Koch brothers — have had the chance to shape the case’s narrative.

Shortly before her trial began, IPT released a five-part online documentary series featuring interviews with family members of the two college students who died in the Jerusalem supermarket bombing. Legal Insurrection’s publisher, the conservative pundit William A. Jacobson, was likewise granted an op-ed about the case in the Detroit News last December — a hit piece headlined, “Rasmea Odeh is no victim.”

Through a FOIA request that was granted almost unfathomably quickly, Jacobson even obtained Odeh’s disciplinary records from the Port Huron county jail where she was held for over a month — including two weeks in solitary confinement — on the frivolous grounds that she was a flight risk following her conviction.

This past March in Chicago, in a speech before a room of over a thousand women of color and trans people of color attending the opening plenary of the fourth annual Color of Violence conference, Odeh ruminated on her recent experiences while incarcerated in Michigan.

I lived the life of a political prisoner for ten years in Palestine, as well as one month of incarceration in Michigan last year, and I know how difficult it is. This recent experience gave me the opportunity to better understand the oppression that women of color, and especially black women, face in this society.

I saw the racism that they face, the dehumanization, the fact that so many were incarcerated for nonviolent crimes, the poverty, the refusal of our government to understand the socio-economic and psychological conditions that are the cause of the vast majority of alleged crimes in this country. I now fully understand the prison-industrial complex that sister Angela Davis so eloquently talks and writes about every day.

When I was jailed last year, the American media and the US government had already portrayed me as a criminal and a terrorist, so I had to explain who I really am to the other women in prison. This made incarceration doubly hard. I had to work with the other prisoners to build a shared struggle. But it wasn’t difficult for them to understand me and my struggle because we face similar oppressions.

This shared struggle is a well-known and essential ingredient for any movement that hopes to succeed. It’s also why rallying solidarity for Odeh is so important.