European Left Debates a 'Plan B' Against Austerity

Europe's left needs a Plan B at its disposal, which will allow any future left government in Europe to face down the blackmail from the European establishment — including threats of expulsion from the eurozone. 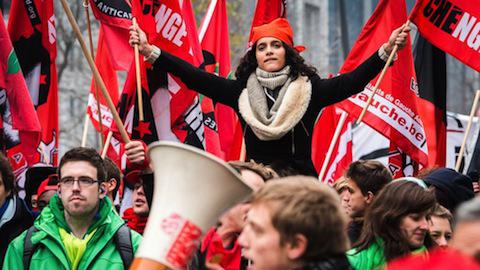 Activists from France's Left Front. The Left Front is divided by strategic debates over how to confront Europe-wide austerity.,

Five key figures of the European left have launched a new initiative “for a Plan B in Europe”.

The statement calls for a summit to be held by the end of the year to develop a new common plan for the left in Europe.

The statement says the memorandum signed by the Greek government and its creditors on July 13 was a coup d'état that shows the extent to which “the euro has become the tool of economic and governmental dominance in Europe by a European oligarchy hiding behind the German government”.

The signatories say the European left's “Plan A” is to build the fight in each country and across Europe to renegotiate the founding European treaties. These lock the European Union into a neoliberal paradigm. The aim is to open the path to a socially just European model of development.

But the statement says this plan, while needed, is insufficient.

Europe's left needs a Plan B at its disposal, which will allow any future left government in Europe to face down the blackmail from the European establishment — including threats of expulsion from the eurozone.

The statement remains intentionally open to what this Plan B could look like.

It lists a number of possibilities, including “parallel payment systems, parallel currencies, digitisation of euro transactions, community based exchange systems” right up to a possible “euro exit and transformation of the euro into a common currency”.

The options are, for now, all on the table.

They would be debated and clarified at the coming summit, with the hope that a common position can be agreed.

On the question of whether the euro should be replaced by national currencies, only Fassina, Italy's dissident former deputy finance minister, has argued for such a radical solution.

Fassina has pushed for an “alliance of national liberation fronts” across Europe, starting with the hardest-hit peripheral nations, to fight for a “managed disintegration” of the euro.

Fassina said these national liberation fronts would be constituted by progressive forces, but be “open to the cooperation of the democratic right-wing sovereignist parties”.

At the launch of the Plan B initiative at the Festival of Humanity in Paris on September 12, Varoufakis said the left's position towards the creditors should be: “It's not us who should leave the euro, you [the oligarchy] leave.”

Instead, he supports the use of parallel currencies or digitised transactions, under the control of each state. He said this could help to break the power of the European Commission, European Central Bank and International Monetary Fund “Troika” to fiscally asphyxiate economies as a blackmail tactic — as occurred in Greece.

Such measures would, according to Varoufakis, buy governments more time to negotiate and develop more resilient structures to resist pressure.

For his part, Lafontaine has proposed a return to a form of looser monetary agreement between nations, such as was in place before the euro.

There tends to be a heavy emphasis on formal or technical solutions in these discussions, but all participants recognise the importance of shifting the balance of forces at the European level to the left. Without such a political advance, no proposal — whether exit from the euro, fundamental overhaul, or reform — will be viable.

Yet the search for a common solution among the European left parties is of critical importance to coalescing a united front capable of shifting the balance of forces. It needs to be one capable of resonating with the peoples of Europe in the short-term, but that will not lead to future dead ends.

The proposal for a Plan B Summit has not received support from a large part of the European left.

At the Festival of Humanity organised by the French Communist Party (PCF) in early September, leading figures from the United European Left/Nordic Green Alliance (GUE/NGL), which groups members of the European parliament to the left of Social Democracy, reiterated their three-pronged platform for reform at a European level.

This involves: democratising the EU and its financial institutions; raising wages and social services while taxing the rich; and beginning large programs of public investment to stimulate growth and jobs.

Such a position seems to ignore the call for a Plan B. It insists on continuing to shift the balance of forces in Europe to allow the three-part reform platform to be implemented — that is, continuing with Plan A.

The Plan A and B camps both refuse to directly criticise Greece's SYRIZA government, preferring to focus their attacks on the European establishment. But the division over whether a Plan B is needed largely mirrors the divided opinion among the European left on the nature of the SYRIZA government after it signed the pro-austerity memorandum.

Those supporting the call for a Plan B tend to be more supportive of Popular Unity, the anti-euro left-wing split from SYRIZA. They see SYRIZA as a party now bound to implement austerity against its own people — in violation of the anti-austerity platform on which it was first elected in January.

On the other hand, those in favour of continuing the European left's current stance have largely continued their support for SYRIZA Prime Minister Alexis Tsipras. They say that the SYRIZA government still has wiggle-room to implement progressive policies — and still constitutes a breach with the European establishment.

PCF leader and president of the European Left Party Pierre Laurent, along with Gregor Gysi of Germany's Die Linke and Pablo Iglesias from Spain's Podemos, attended SYRIZA's major election rally in Greece. Despite signing up for more austerity and the Popular Unity split, SYRIZA was re-elected last month with just a small drop in seats.

After the elections, the GUE/NGL congratulated Tsipras, saying in a statement: “The people of Greece gave Syriza and Tsipras a strong mandate to continue to govern and their election victory gives strength to the struggle to overcome austerity and unemployment, as well as to implement social policies that better serve the needs of the people of Greece.”

But Iglesias has faced a backlash by the left of Podemos for his continued support for Tsipras. Left-wing members of Die Linke have also put forward a different position to that of leaders like Gysi.

Leading left-wing Die Linke figure Sahra Wagenknecht admitted she was having “difficulty in congratulating SYRIZA for its victory”. She defended the vote won by Popular Unity — despite it falling just short of the 3% threshold to enter parliament — in difficult conditions.

In France, these divisions are being felt very sharply among the major constituents of the Left Front ahead of crucial regional elections in December.

The Left Front already lacks a national strategy for the elections. Disagreements over strategy regarding Greece and the euro risk driving a deeper cleft between the major constituents of the coalition — the Left Party (which calls for a Plan B), and the PCF (which backs Tsipras and the mainstream GUE/NGL strategy).

These divisions have resulted in the Left Front going into electoral coalitions on a regional basis as its constituent parties rather than as a bloc, undermining its capacity to set a clear political agenda.

Despite several promising regroupment efforts, the lack of national direction has also resulted in several regions where the PCF and Left Party are running on separate lists.

At this stage, a united left at the time of the 2017 French presidential elections is not assured.

The third major pillar of the Left Front, Ensemble, has repeated calls for a more united national approach to the regional elections. However, it appears unlikely its two Left Front partners will change course.

Despite such divisions, one thing is certain: a serious debate about how the left should relate to the EU and the euro is now on the table and cannot be ignored.