“The report the Intercept story references is an internal classified document,” said Pentagon spokeswoman Linda Rojas. “As a matter of policy we don’t comment on the details of classified reports.” 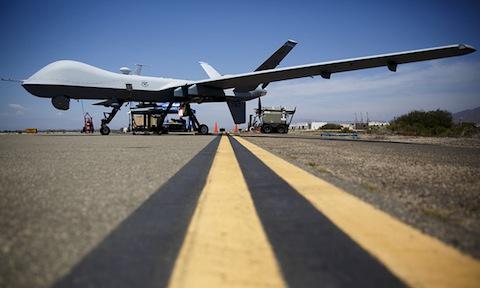 The Intercept report revealed, among other new disclosures, that at one point in 2012 Barack Obama had approved 20 people for assassination in Yemen and Somalia., Patrick T Fallon/Reuters/Corbis

American whistleblowers hailed the release on Thursday of a collection of classified documents about US drone warfare as a blow on behalf of transparency and human rights.

The documents anchored a multi-part report by the Intercept on the Defense Department assassination program in Yemen and Somalia. Amnesty International, the American Civil Liberties Union (ACLU) and other rights groups said the report raised significant concerns about human rights violations by the US government, and called for an investigation.

Classified documents published by the Intercept include pages from a 2013 study of the drone program by a Pentagon taskforce. The documents came from “a source within the intelligence community who worked on the types of operations and programs described in the slides”, the Intercept said.

“In some ways it reconfirms and illuminates much of what we knew, or thought we knew, about a lot of these programs, like that the administration firmly prefers kill over capture despite claiming the opposite, and that there’s not ‘a bunch of folks in the room’, as Obama calls it – that there’s a clear, bureaucratic process for this.

“It clearly shows, as we’ve known, that the United States does not know who it’s killing.”

The White House and National Security Council declined to comment on the leak.

“The report the Intercept story references is an internal classified document,” said Pentagon spokeswoman Linda Rojas. “As a matter of policy we don’t comment on the details of classified reports.”

The CIA maintains a drone assassination program separate from the Pentagon program, although Barack Obama has called for bringing the CIA program inside the Defense Department. That effort has stalled.

The Intercept report revealed, among other new disclosures, that at one point in 2012 Obama had approved 20 people for assassination in Yemen and Somalia. More than 200 were killed by drones in those countries that year, according to the Bureau of Investigative Journalism.

It revealed that the military labels unidentified people it kills in targeted strikes as “enemies killed in action”, although victims may be family members or associates of actual targets – or may just have been nearby, or mistakenly targeted.

Edward Snowden, the former government contractor who in 2013 leaked classified documents about surveillance programs to journalist Glenn Greenwald – then at the Guardian, now at the Intercept – hailed the new leak on Twitter.

“In an astonishing act of civil courage, one American just shattered an unspeakable lie,” Snowden wrote. “When we look back on today, we will find the most important national security story of the year. Today, @DanielEllsberg is smiling.”

Ellsberg, who in 1971 leaked the Pentagon Papers secret history of the Vietnam war, confirmed in an interview with the Guardian that he was smiling.

“He’s right about that,” Ellsberg said.

Ellsberg said the source behind the Intercept reports was part of a chain of recent whistleblowers going back to Chelsea Manning, the US army soldier who passed classified documents to WikiLeaks and was convicted of violating the Espionage Act.

“It’s wonderful,” Ellsberg said. “I waited 40 years to see somebody, for Chelsea Manning, to put out a comprehensive, sufficiently voluminous number of long-held secrets, enough to make the case clear.

“I waited 40 years for Chelsea. Three more for Snowden. And so it’s wonderful that somebody is telling the truth about this series of crimes. I’m very glad to see it.”

In a Democracy Now interview Jeremy Scahill, the lead author of the Intercept reports, called the source an “extremely principled and brave whistleblower”.

Zenko said the locus of the source was “hard to know”, because “there’s just such a crossover between the intelligence community and the military anyway”.

“As we know, to keep one Predator [unmanned aerial vehicle] aloft, you need like 130 people, and most of them are just looking at video screens and doing analysis of the collection that that drone does,” Zenko said. “There’s so many people running these programs.”

Ellsberg said of the source: “I hope they stay anonymous. Nothing at all would be gained by their suffering the fate of exile like Snowden [who now lives in Russia], or isolation or imprisonment like Chelsea [who was given a 35-year jail term]. Or the life sentences that I faced, or that others have faced.

“They did the right thing. The others were wrong to keep those secrets.”