To Thank Me For My Service, Work for Peace

May 25, 2020 Rosemarie Jackowski Veterans for Peace
Printer friendly
To Thank Me For My Service, Work for Peace Published May 25, 2020 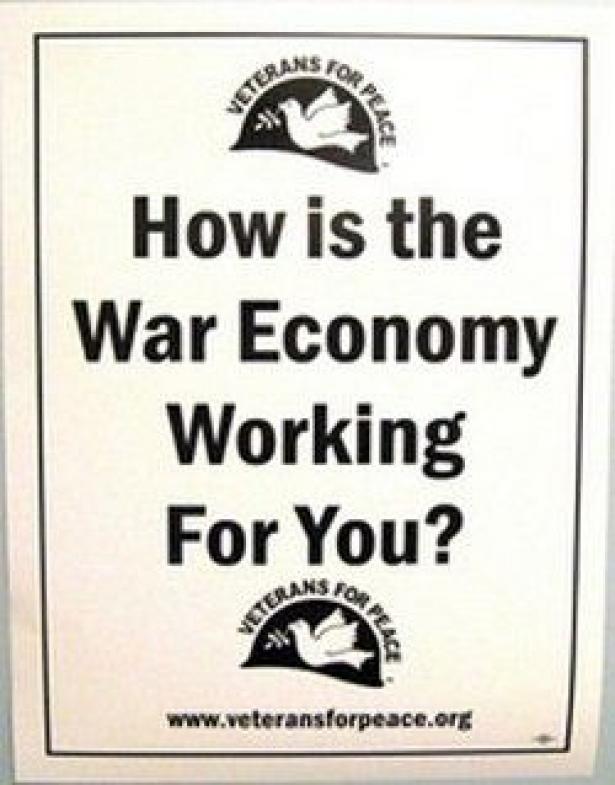 "Thank you for your service"... on second thought -

I mourn mostly for those we have killed — and I mourn for those we haven't killed yet, but will in the days ahead. I mourn for all of the mothers and fathers who put their children to bed at night and wonder if this will be the night that they are killed by a drone attack.

I mourn for the 500,000 Iraqi children - dead because of U.S. foreign policy. The official policy as described by Madeleine Albright on 60 Minutes was 'that we think the price was worth it.' Worth it to whom? Not to the mothers and fathers, sisters and brothers, grandmothers and grandfathers of those children.

I mourn the execution of Pvt. Eddie Slovik — the gentle soldier who was too moral to kill. He refused to fight. On Jan. 31, 1945, the U.S. executed him before a firing squad. He is the only U.S. soldier, that we know about, who was executed during World War II. In recent years has friendly fire been used against some who refuse to kill?

I mourn for all the unarmed civilians slaughtered by U.S. troops in Korea. The massacre at No Gun Ri is one of many war crimes.

I mourn for those still being held in Guantanamo. Either put them on Trial, or release them and pay them compensation for the time they were illegally imprisoned.

The results of recent elections show that more than ninety percent of United States voters support the foreign policy of the Democratic/Republican Party. That includes support for war, torture and imprisonment without due process. More than ninety percent of the people, as evidenced by their votes, are not peace makers. Supporting crimes against humanity is not an option for people of conscience. Any vote for any Democrat or Republican candidate is a vote for war. Those voters are complicit in war crimes because they enable crimes against peace. Electing peace makers to the Congress would save lives and money.

As a nation, none can compare with the United States when it comes to the ability to slaughter innocent civilians. Remember Hiroshima and Nagasaki. The United States is the only nation to have used nuclear bombs to kill.

Now we can kill from the comfort of our own neighborhoods ... at no risk to our own safety. Some believe that the use of drones is a cowardly approach to warfare. Some argue that the use of drones is a war crime. No matter how one feels about drones, it is certain that drone warfare has raised the killing of civilians to a new level. The slaughter of little girls walking to school is a crime against humanity.

Do the drone operators who sit at a computer thousands of miles away from any danger deserve our admiration? Their safety is not at risk. Should they be "'thanked for their service"? Does wearing a uniform give anyone the moral or legal right to kill unarmed civilians? Does wearing a uniform make anyone a hero? Is killing by remote control really an example of heroism?

How can "heroism" be defined? Heroism is the willingness to stand alone in opposition to evil and injustice.

We have many heroes. Julian Assange, Ed Snowden, Chelsea Manning, Jeremy Hammond, John Kiriakou, Aaron Swartz are just a few of many. There are also local heroes... the peacemakers.

As a role model we have Archbishop Oscar Romero who took on the entire power structure in El Salvador. With grace and dignity he defended the poor and disenfranchised. He was assassinated while saying Mass.

When I think about heroes, I always think about my friend, Elliott Adams. During the '60s, Adams volunteered for the Army. He fought in Vietnam, He was a paratrooper. He was wounded. After hospitalization, he was redeployed to Korea, and then Alaska. All of those things might make Adams seem like a hero to most people, but that is not why I think of him as a hero. Adams is a former president of Veterans for Peace, but that also is not why he is a hero to me. More than anyone I have known, Adams has dedicated his life since being discharged from the military to working for global peace. He has gone to Gaza with Physicians for Social Responsibility. In solidarity with the prisoners at Gitmo, Adams went on a hunger strike. Adams has been at the forefront of the protests against the use of drones at Hancock Air Base near Syracuse, N.Y. Adams was arrested while participating in peaceful protest.

Below is Adams' sentencing speech as he delivered it to the court. This is one of the most articulate anti-war statements I have ever heard.

"I appreciate the bench's effort to understand the arguments made — arguments involving local law, international law and, even the principles of civil disobedience.

"My experience in war has taught me that in life we periodically get tested to see if we can stand up to the pressures of 'socially acceptable procedural norms' which push us to work within the little laws and instead comply with the requirements of International Humanitarian Law. I cannot condemn others when they fail that test for I have failed it myself. But those who do fail it are condemned to live with the horrendous cost society pays for their failure. I believe this court failed that test. The court may not have felt an unavoidable compulsion to comply with International Humanitarian Law, but it certainly was given the justifications it could have used to stand up and comply with International Humanitarian Law. But being here in DeWitt near an epicenter of war crimes couched in the humdrum of civilian life, the bench may find it is tested again ... and again.

"I believe that my co-defendants and I did what is right morally, but more relevant to this court, what is required by the law, the big law, that law that deals with thousands of lives, not the little law that deals with disorderly conduct. If the court had chosen to decide on the big law it would have found us innocent. But since the court chooses to rule on the little law, the law about orderly conduct, then it must not only find me guilty but guilty to the fullest extent, with no mitigation.

"As the court stated, there will always be consequences for pursuing justice through 'changes made by actions outside the socially acceptable procedural norms.' Among other life experiences I have over 15 years in local elected public office and it became apparent to me that abiding by the 'socially acceptable procedural norms' can only lead to more of the same injustice, indeed those norms are there to prop up those injustices.

"I am proud to accept the consequences of my acts and any jail time. I do not want any suspended sentence. If you give me one, also please let me know how I can violate it before I leave the courtroom. I do not have money to pay a court; I spend what little money this old man has trying to bring about justice. My community service has been doing the duty that the courts shrink from — calling attention to war crimes and trying to stop war crimes. Standing in this court as community service, it is the little I can do for society."