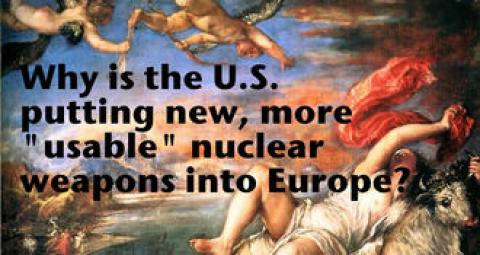 The U.S. plans to deploy newly designed type B 61-12 nuclear bombs. Instead it should remove existing nuclear bombs. The NATO strategy of so-called "nuclear sharing" is a violation of Articles 1 and 2 of the NPT. Those provisions state that every party to the treaty promises "not to transfer to any recipient whatsoever nuclear weapons or other nuclear explosive devices or control over such weapons or explosive devices directly, or indirectly" and also promises that every "non-nuclear-weapon State Party to the Treaty undertakes not to receive the transfer from any transferor whatsoever of nuclear weapons."

People in Germany, the Netherlands, Belgium, Italy, Turkey, the United States, and elsewhere have signed this petition:

To: The Governments of Germany, the Netherlands, Belgium, Italy and Turkey

Do not upgrade the U.S. nuclear weapons in Europe. Remove them. People in the United States and around the world would support you in this.

The petition will be delivered in each country. Before it is, please add your name.