Poultry worker average about $11 an hour, or between $20,000 and $25,000 a year. For every dollar spent on a chicken product, a worker sees just two cents. That kind of pay qualifies a poultry worker with two children for food stamps and free school lunches. And they still might not see all of their promised pay. They often working more than 40 hours a week — they’re required to stay at most plants until all chickens are processed — but rarely get overtime pay. 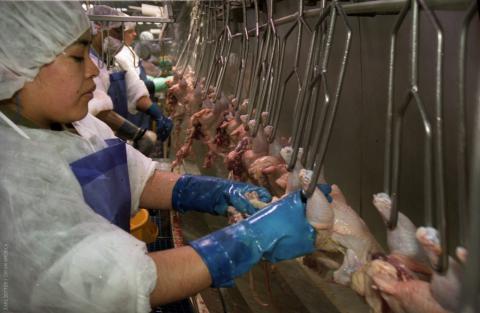 Pedro started getting worried when his hands were so swollen he needed a larger size of plastic gloves.

Pedro (which is not his real name) would arrive at the chicken processing plant for Tyson in North Carolina at 5 p.m. to clock in for the second shift. For the next three hours, he says he wouldn’t get a single break from breaking down slaughtered and defeathered chickens, cutting the shoulders and pulling out the tenders, until he was allowed to take a half-hour lunch at 8 p.m. Then it was back to the line until all of the chickens were processed, sometimes at 5 or 6 in the morning.

He says the line moved so quickly that he was processing 45-50 chickens every minute, or nearly one each second. The fast, repetitive motions soon started affecting his hands, which swelled up painfully. They got so large he had to wear 3XL sized plastic gloves. But when he was sent to the plant’s infirmary, he says the nurse simply told him to take ibuprofen and soak his hands in epsom salts and hot water.

“The infirmary nurse told me it was nothing to worry about, just your body getting used to it, like when you lift weights and your muscles swell up,” he said on a call with media. But he didn’t adjust and his hands kept getting worse. He eventually sought out medical treatment from a doctor, who told him he’d never seen injuries as bad as Pedro’s and gave him work restrictions. Yet Pedro says his supervisor ignored the doctor’s orders and put him back to work on the line. “They do not care about the safety of the person, they just care about putting the chickens out,” he said.

He’s worked lots of jobs, many of which — such as construction — were physically demanding. But nothing was quite like the job processing chickens. “Of all the jobs I’ve had in my life, working at the processing plant was the worst job ever,” he said.

In a report released on Tuesday, Oxfam America is launching a new campaign to address what it says are rampant health and safety issues, as well as low pay and few benefits, that face the people who process chicken in the country’s plants. Consumer demand has been growing such that the average American who consumed about 20 pounds of chicken a year in 1950 eats 89 pounds today, and today the industry sells 8.5 billion chickens a year, earning $50 billion. That demand has come with increased pressure on processing line speeds, which are twice as fast today as they were in 1979, with an upper level of 140 birds per minute today versus 91 back then. But the report claims that speeds can go even higher than that, given that each line is run by a supervisor with the capacity to slow it down or speed it up at any time. In interviews it conducted with current and former workers in Arkansas, Mississippi, and North Carolina, they reported averaged between 35 and 45 birds per minute, or processing more than 2,000 chickens an hour and 14,000 a day.

Workers have to hang, cut, trim, bread, freeze, and package chickens, actions that require multiple motions on each bird. That means that the average worker has to repeat the same motion — cutting, pulling, hacking, twisting, and hanging — 20,000 times a day with force, although some reach as many as 100,000 of the same motion each shift. This speed, coupled with repeated motions, is a recipe for injury.

Workers report pain in their hands, fingers, arms, shoulders, and backs, plus swelling, numbness, tingling, twitching, stiffness, and loss of grip. Some workers say the pain is so intense that it wakes them up at night. Sharp knives and even chicken bones lead to cuts, which can also expose workers to pathogens. The conditions can be long-lasting if not permanent. They end up with high rates of injuries, although Oxfam warns that even the official numbers can be an undercount. They have ten times the rate of repetitive strain from microtasks than the rest of the workforce, seven times the rate of carpal tunnel syndrome, and five times the rate of musculoskeletal disorders generally. Human Rights Watch has found that poultry workers are 14 times more likely to have injuries such as “claw hand,” where their fingers get locked in a curled position, or ganglionic cysts where fluid is deposited under the skin.

In a 2013 survey from the Southern Poverty Law Center (SPLC), 86 percent of workers reported hand and wrist pain, swelling, or numbness or the inability to close their hands. They also report being exposed to harsh chemicals, often used to clean up the blood, offal, and grease that flows from the birds. One survey found that every single worker reported being exposed to chemicals on the job, with half exposed to chlorine and 21 percent to ammonia.

“Despite industry claims that conditions are improving and injury rates are dropping, we don’t believe that they’re true,” Oliver Gottfried, senior advocacy and collaborations advisor at Oxfam, said on the media call.

Perdue said in a statement that it provides “competitive wages” above minimum wage, comprehensive benefits, and paid time off. It also pointed to its lost-time rate as reported by the Bureau of Labor Statistics, 0.17 per 100 workers compared to .8 for all industries, and its incident rate as recorded by OSHA of 2.23 compared to 4.5 for the industry.

Pilgrim’s and Sanderson representatives did not respond to a request for comment.

The industry also says the injury rate has steadily fallen over the last 20 years. But that data is often based on self-reported rates. Meanwhile, sending a worker to the company infirmary and instructing him to take Advil rather than to a regular doctor, as Pedro says he experienced, means a company doesn’t have to official record an injury in its log.

“Employers have been going to great lengths to avoid taking responsibility for these injuries,” said Celeste Monforton, professional lecturer at George Washington University and a former legislative analyst for the Occupational Safety and Health Administration (OSHA).

Then there’s the problem of breaks. The bathroom is particularly challenging, as workers say they have to get a supervisor to find another employee to fill their spots to keep the line running while they relieve themselves. Workers report that they have to wait an hour or more to get a break. Some say that to cope, they severely cut back on drinking liquids or even wear diapers. Pedro has seen people urinate on themselves while working on the line out of fear of losing their jobs if they leave to use the bathroom. Tyson specifically refutes this issue in its plants, saying in a statement, “we make it very clear to our production supervisors that they are to allow Team Members to leave the production line if they need to use the restroom. Not permitting them to do so is simply not tolerated.”

All of this is undertaken for low wages. Oxfam reports that they average about $11 an hour, or between $20,000 and $25,000 a year. For every dollar spent on a chicken product, a worker sees just two cents. That kind of pay qualifies a poultry worker with two children for food stamps and free school lunches. And they still might not see all of their promised pay. Workers report often working more than 40 hours a week — they’re required to stay at most plants until all chickens are processed — but rarely get overtime pay.

There have also been investigations and lawsuits finding that plants fail to pay workers for time spent putting on and taking off all of their safety gear or for their lunch breaks. SPLC found that nearly 60 percent have to pay for some or all of their protective equipment, eating into their wages. On top of all of that, Oxfam did not find a single worker who got paid time off for illness, vacation, or personal leave. Yet the industry is profitable.

The top four companies — Tyson, Pilgrim’s, Perdue, and Sanderson — control about 60 percent of the market. Tyson made $856 million in profit last year, Pilgrim’s made $711 million, and Sanderson made $249 million.

Oxfam is hoping that by drawing attention to the issue of safety, consumers will be inspired to push back. Its reforms include lower line speeds and higher staffing numbers, stronger training, more frequent breaks, and dealing with and reporting workers’ injuries.

“They need to have respect for workers,” Minor Sinclair, Oxfam America’s regional director, said. It’s targeting the four largest because, he said, “They’re the ones that have the lion’s share of employees and the lion’s share of the market. They influence the market for other poultry companies.”

Pedro will miss out on any improvements, as he was fired, he says because he had been raising awareness about rights among his coworkers at the Tyson plant. He noted people used to ask him why he would put up with those conditions at work, but there are few other jobs on offer in his area. “I’m trying to pay my bills, pay my rent, feed my family,” he said. “I have to do what I have to do to survive.”