"A lot of what we do was done 25 years ago covertly by the CIA." Alan Weinstein, one of the founders of the National Endowment for Democracy 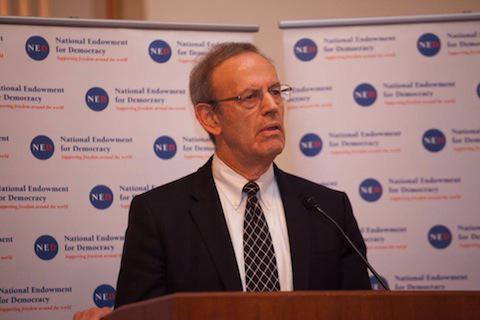 To most people the National Endowment for Democracy, probably looks like a pretty innocuous organization. But when you examine the records of those who control it and its affiliates, it starts to look like they're running a shadow foreign policy.,

When we think about non governmental organizations we tend to focus on heroic groups like Doctors Without Borders, whose members travel into war zones treating the wounded without regard to the political affiliations of their patients. It’s dangerous work, as shown by a recent air-strike on a hospital run by the group in the Afghan city of Kunduz in which 13 staff and 10 patients died (7 other bodies have yet to be identified).

So, when we hear about Russia crafting a law in 2012 to make certain NGOs register as “foreign agents”, we naturally think this shows growing repression in that country. Offered as further proof of this is the fact that Putin’s government has created even stronger rules this year, seeking to ban “undesirable” groups. The first to be thrown out of the country in this way was the National Endowment for Democracy (NED). How could Russian law-makers ban an organization whose motto is: “Supporting freedom around the world’?

Many notable people, including Carl Gershman, Chairman of the Endowment since its creation in 1983, have been vocal in criticizing this Russian legislation. They invariably fail to mention that the original 2012 law was based on a an American one enacted in 1938, the Foreign Agent Registration Act. This law, “also requires individuals and entities working for foreign interests and seeking to influence U.S. policies to disclose those relationships with the U.S. Justice Department or face prison.”

Although it promotes itself as a “non-governmental organization”, NED receives at least 90% of its funding from the US Congress, earmarked to USAID; the balance is provided by right leaning non-profits like the Olin and Bradley Foundations. To most people, the Endowment probably looks like a pretty innocuous organization. After all, who’s against more democracy? But when you examine the records of those who control it and its affiliates, it starts to look like they’re running a shadow foreign policy, not only in Eurasia but throughout the world, sometimes acting in ways that are contrary to the wishes of the powers that be in Washington.

To bolster its credibility as “non-partisan” in the American context, NED distributes more than half of its money to four organizations: the Free Trade Union Institute of the AFL-CIO (FTUI), the Center for International Private Enterprise of the U.S. Chamber of Commerce, the National Democratic Institute for International Affairs (NDI) and the International Republican Institute (IRI). Chairing the latter is Senator John McCain (R-AZ), probably the most well known hawk in the US Senate.

In fact, for an organization with the aim of “peaceful democracy promotion” it’s riddled with Neoconservatives and their Liberal Hawk counterparts, including such luminaries as Elliot Abrams (of Iran-Contra fame), Zalmay Khalilzad (Former Ambassador to Iraq and Afghanistan).and former Secretary of State Madeline Albright (Chairwoman of the NDI), to name just a few.

The presence of reliably pro-war Washington insiders like these points to the real roots of the organization during the Reagan Era when it was created with the input of then CIA Chief William Casey. At that time, the actions of the US intelligence community were being scrutinized in light of the Church Committee hearings and other revelations of the 1960s and 1970s. Thus, some of the functions that the CIA once performed were farmed out to the newly created Endowment. One has to concede that NED is a PR savvy version of what these agencies used to do covertly and it also helps to keep the hawks in the foreign policy conversation, whatever disasters they leave in their wake when they hold the reins of power.

Looking critically at the so-called “Color Revolutions” that NED has funded, one begins to see similarities that couldn’t be coincidental. One example is the symbol of a clenched fist, probably expropriated from the Black Panthers and first used by OTPOR, a Serbian youth group that became something of a template for successful regime change operations from the end of the 90s until today. Now called CANVAS (Center for Applied Nonviolent Action and Strategies), remnants of the group train civil society and student groups in many countries.

The fist symbol, originally black but often using the “colors” associated with each individual “movement”, has been seen with some variation in Georgia, Ukraine and Venezuela, places where NED or its affiliates spent big to produce regime change.

And it isn’t just student groups being trained and funded by the Endowment. As a 2013 report by Al Jazeera showed, in the weeks and months leading up to the ouster of Egyptian President Mohammed Morsi, NED and some of its affiliates were funding individuals and organizations calling for the overthrow of the elected government in the country.

The reporter on the story, Emad Mekay, made some interesting discoveries about the role that the organization played in the ouster of the Egypt’s first democratically elected president, including tracking down where some of the organization’s money was going: “A main conduit for channeling the State Department’s democracy funds to Egypt has been the National Endowment for Democracy. Federal documents show NED, which in 2011 was authorized an annual budget of $118m by Congress, funneled at least $120,000 over several years to an exiled Egyptian police officer who has for years incited violence in his native country.”

This charming man, Colonel Omar Afifi Soliman, the recipient of a “human rights fellowship” at NED, used social media to call for some pretty heinous things. One Facebook post, featured in the report, had Soliman calling on his Egyptian followers to “Make a road bump with a broken palm tree to stop the buses going into Cairo, and drench the road around it with gas and diesel. When the bus slows down for the bump, set it all ablaze so it will burn down with all the passengers inside… God bless.”

Although the press and politicians quickly forgot, it needs to be emphasized that Morsi was the elected leader of Egypt and, before he was ousted, he tried to negotiate an end to the crisis he helped to instigate, admitting that he “made many mistakes”. The word coup was rarely uttered in the aftermath of his removal and military aid to the tune of a billion and a half a year soon started flowing back into the country.

What’s going on in Egypt is an overlooked humanitarian disaster, it isn’t just members of the Muslim Brotherhood who are being rounded up by President al-Sisi’s thugs and given death sentences in mass trials. Many of the young people and progressive forces who so bravely faced off against Mubarak at Tahrir Square to create a more progressive Egypt are facing similar persecution. Ironically, some of them received aid from NED or affiliated groups and this could be used as evidence against them in court as Egypt has its own version of the “Foreign Agent Registration Act”discussed earlier.

A Danger to Democracy

There’s also the glaring hypocrisy revealed by where most of NED’s money gets spent. The cases of Haiti, Venezuela and most recently Honduras show that those governments deemed “Anti-American” (often a euphemism for not laying down for multi-national business interests) will be targeted for regime change regardless of their citizens’ democratic choices. It doesn’t matter how many elections deemed free and fair you win if you are seen as acting against American interests there is a good chance NED or one of its affiliates will put you in their cross-hairs.

It’s pretty obvious that foreign policy programs run by groups like NED risk de-legitimizing protest. If an increasing number of governments (or corporations for that matter) start engaging in these activities as we’re just beginning to see, paying protesters and the like, they could essentially professionalize protest, at the same time putting genuine aid workers at risk. As an interesting side-note, a convincing argument has been made that this kind of “Astro-turfing” helps explain the rise of the Tea Party movement in the US.

What’s most dangerous about NED is that it gives voice and a measure of power to some of America’s biggest hawks whether they’re in government or not. In this way and many others, NED is not only not promoting democracy, it’s often doing the exact opposite at US taxpayer expense.

Derek Royden is a freelance writer based in Montreal, Canada with an interest in activism, politics and culture. His work has appeared on Occupy.com, Truthout, Antiwar.com and Gonzo Today as well as in Skunk Magazine.