The Chicago Teachers Union has formally told its membership to start saving money for what could be "a protracted strike." 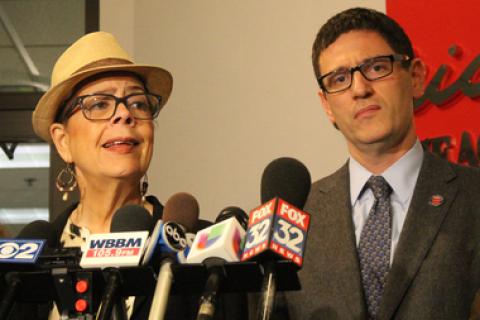 CTU President Karen Lewis and Vice President Jesse Sharkey say they get to move, too, and they intend to take the fight to CPS and Gov. Bruce Rauner., DNAinfo
RIVER NORTH — The Chicago Teachers Union has formally told its membership to start saving money for what could be "a protracted strike."
"We are asking teachers, paraprofessionals and clinicians in our bargaining unit to save at least 25 percent of their pay in preparation for a possible strike," union President Karen Lewis said in a statement released Monday.
"With the uncertainty in Springfield, the continued chaos at the Board of Education and the constant threats to our classrooms, we have to be prepared. Our families will depend on us being able to weather what could be a protracted strike."
Although the labor-law requirements leading up to a strike could still take months, the union set the stage for it Monday with a series of strike votes, starting with what's being called "an official ‘practice’ strike vote and contract poll in all CPS school buildings" on Thursday.
Lewis said in a news conference at CTU Headquarters on Monday that the series of votes was about registering teacher attitudes toward a strike and what issues are worth fighting for.
"We want to make sure that when we take the real one, we know where we stand," Lewis added.
The union threats came after CPS Chief Executive Officer Forrest Claypool warned earlier in the day that 5,000 layoffs might be necessary if the state does not grant the district an additional $500 million that has been budgeted by CPS, but not yet authorized by the General Assembly, which of course remains locked in a budget impasse with Gov. Bruce Rauner.
"The Chicago Teachers Union is putting politics over what's right for our teachers and our children," Claypool said in a statement issued in response to the union. "We have urged them to join us in lobbying Springfield to end the discriminatory funding policies that have showered money on suburban and downstate schools while slashing dollars for Chicago schools. The answer to this crisis lies with Gov. Rauner and legislators in Springfield, not in strike threats."
Yet CTU Vice President Jesse Sharkey dismissed the notion of joining forces in lobbying Springfield, as CPS is seeking what he called a "short-term" fix distasteful to the union, given the inevitable connection to reduced pension benefits and the lack of any long-term solutions in the CPS budget.
"We're talking about a showdown," Sharkey said. "This is gonna be a game in which we get to move, too. ... We will take this political fight right to them."
"We have to do what works for us, which ultimately is withholding our services," Lewis said. She also threatened that, if teachers went out this winter, they would not be in the streets, as in the last strike in September 2012, but instead would occupy the banks the union feels are cutting the school district a raw deal.
"We did the streets last time," Lewis said. "Now we're going to the banks."
She added that would also exert pressure on Gov. Rauner should it come to that.
Lewis rejected 5,000 layoffs at midterm as a "ridiculous" proposal that would call for the "reprogramming" of as many as 300 schools affecting as many as 300,000 students with larger class sizes and general chaos.
"It's a waste of time, energy and effort," Lewis said. "You cannot blow up schools because you don't have any money."
Lewis said she believes parents would react against those mass layoffs as well.
"Teachers are feeling the strain placed on them by principals who have to work with reduced budgets and cuts to special education and other necessary programs," Lewis added. "Class sizes are ballooning, and the district is crying broke when it comes to our demands for more teaching resources, while at the same time cheering themselves on while opening multi-million-dollar charter operations.
"This makes no sense," she added. "We have to take a stand for our profession and for our students and their families."
Last week, Claypool warned that if the state budget standoff wasn't resolved by Feb. 5, the district would face massive cuts, including laying off 5,000 teachers.
Although he had warned of pink slips going out this month if the additional state funding is not forthcoming, on Monday Claypool updated that to suggest pink slips could go out in January with layoffs in February.
Sharkey said teachers always considered layoffs before the end of the calendar year as an idle threat. "Who's gonna get grades in?" Sharkey said, if teachers are laid off before the end of the semester.
"It's uncertainty, but it's also disrespect," Lewis said, to have possible layoffs looming over teachers during the holiday season. She called Claypool a "technocrat," adding that his original idea to lay teachers off in December showed that he has no concept of what's required in education.
Talks to reach a new deal between the union and CPS are ongoing, but are in mediation — one of the initial steps required by labor law before taking a strike vote and moving on an actual strike. The two sides would have to then agree on a fact-finding period before a formal strike-authorization vote would be called. A strike could come 10 days after that, however. Lewis has previously estimated a strike could come this winter.
"It is time to move this process along," Sharkey said.
The union suggested it is out to beat the school system to the punch in a showdown. It is also planning a rally at Butler Field in Grant Park on Nov. 23.
For more neighborhood news, listen to DNAinfo Radio here:
https://soundcloud.com/dnainfo-radio/chicago-teachers-strike-coming-soon