Fifty years ago, young people inspired and moved our whole country away from Jim Crow, war and McCarthyism in the 60s. Today a new generation of young activists are inspiring and moving our country. Today's youth are active for justice, jobs, immigrant rights, against police murder and racism, peace, and are revitalizing the labor movement. Just this week, from Missouri to the Fight for $15 actions, young people are again inspiring a generation and the whole country. 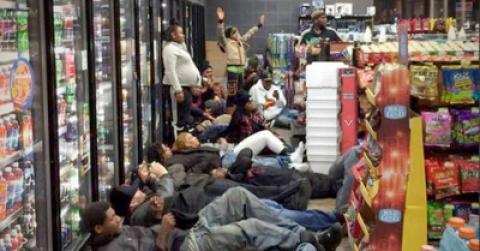 photo: Mark Apollo / Pacific Press / LightRocket / Getty Images // Aljazeera America
Millennials are often made out to be selfish and individualistic, but they appear to be taking a greater interest in social movements and dramatic social change than some previous generations. A series of polls suggests that, compared with other demographic groups, Americans in their 20s have less favorable views of capitalism and higher opinions of unions and government intervention in the economy. Millennials are also the first generation in a long time to feel a sense of common purpose in the economy and to look toward collective action as a means of improving their circumstances. Millennials are entering the workforce during the worst economic situation since the Great Depression, so it's harder to buy into the myth that working hard and narrowly focusing on your own fortunes will be enough to ensure success.
In a recent Atlantic story, Jonathan Timm wrote a story on the hopeful, if fragile, signs of millennial engagement with the labor movement, as well as the substantial structural issues facing a union resurgence. The article focused on the story of an employee at Peet's Coffee in a relatively poorly paid service-sector job and her attempts to organize her workplace. The effort failed, coming to ruin on the shoals of intractable management and high turnover, but he featured very high profile victories at digital news companies such as Gawker and Vice that have garnered substantial attention in recent months (Al Jazeera America's digital staff unionized in October.)
The Peet's Coffee story is far more representative of the current state of the labor movement than Gawker's successful drive. The service sector, in which so many young people are employed, remains overwhelmingly nonunion. Still, the article isn't wrong to focus on millennial engagement. Young people are taking the lead not only in union organizing drives such as Fast Food Forward and the adjunct campaigns in higher education but also in movements against student debt and in Black Lives Matter. These young people are not just mostly white, college-educated young professionals; the faces of these movements also include African-American security guards in Philadelphia, Hispanic construction workers in Houston and African immigrant Uber drivers in Seattle.
This reflects today's workforce, which is far more diverse in terms of race and gender than it was during labor's postwar heyday. It also comes out of vastly different employment practices. The New Deal laws of the 1930s primarily targeted industrial workplaces, where workers often punched in under the same roof and stayed with the company for their entire lives. Agricultural and domestic labor was excluded. Millennials, on the other hand, work in an economic context in which fewer and fewer people are likely to work in the same location or stay at the same company for their entire working life. Many companies misclassify their workers as independent contractors in an attempt to discourage organizing and avoid providing required benefits or overtime payment. And everywhere average wages stagnate while inequality increases.

Organized labor and young people who have recently entered the workforce have common cause.

Traditional unions still face an uphill battle when trying to expand their ranks in the face of overwhelming employer opposition and weak labor laws. But alt-labor groups such as the Restaurant Opportunities Center and the Workers Defense Project and movements without fixed membership rosters such as the Fight for $15 are more easily able to rally millennials to their cause. The labor movement would make a lot of sense for a generation caught on the edge of the new perilous economic order and sympathetic to collective action.
Moreover, the movement's rhetoric and political action exhibit a more racially inclusive mindset. Black Lives Matter and the minimum-wage-focused Fight for $15 have cross-pollinated, to the benefit of both movements, ignoring calls that they limit themselves to their separate issues.
"We see a real national trend of younger workers really pushing the labor movement to the left in a number of ways," says Katy Fox-Hodess, a former campus chairwoman of graduate student union UAW 2865, in an interview with Timm. "We have to stand up on issues of racism, xenophobia, women's issues, LGBT issues, foreign policy issues. We have to have a broader politics."
The lamentable state of labor law, in which employers always hold the upper hand and can fire worker activists with impunity, has prevented this activism and favorable attitudes toward unions from directly benefiting labor as much as it should. Even though the Service Employees International Union is the biggest supporter of the Fight for $15, few millennials are union members. In the case of Gawker, the union drive of the workers at Gawker faced unusually weak management opposition to their organizing campaign.
Nevertheless, there's a new sense that the challenges millennials are facing - from increasing debt loads to stagnating wages to a lack of job prospects - can be tackled only by collective action. Organized labor and young people who have recently entered the workforce have common cause. By championing the issues millennials care about most, unions not only promote a more just economy for a new generation; they also chart a course for their own revival.
[Amy B. Dean is a fellow of the Century Foundation and a principal of ABD Ventures, a consulting firm that works to develop innovative strategies for organizations devoted to social change. She is a co-author, with David Reynolds, of "A New New Deal: How Regional Activism Will Reshape the American Labor Movement."]