We Need a New Trust-Busting Movement in America

Bad news for consumers and workers: This year has already seen $4 trillion worth of mergers and acquisitions deals. 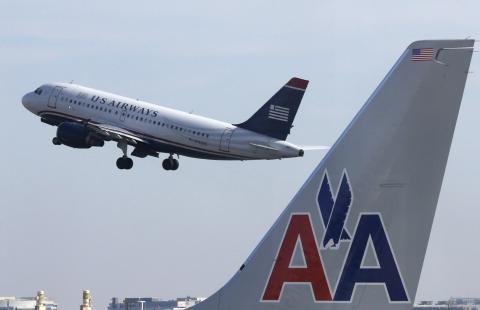 U.S. Airways and American Airlines have agreed to give up landing spots and gates at several U.S. airports to win antitrust approval for their proposed merger., Larry Downing / Reuters

Like immense amoebas on the prowl, America’s already huge corporations are combining like nobody’s business. In recent months, Walgreens bought Rite Aid, uniting two of the nation’s three largest drugstore chains; in beerland, Molson Coors is buying Miller ; mega-health insurers Aetna and Anthem, respectively, bought mega-health insurers Humana and Cigna ; Heinz bought Kraft, good news for those who take ketchup with their cheese; and American Airlines completed its absorption of US Airways, reducing the number of major U.S. airlines to four, which now control 70 percent of the air travel market. On Wall Street, the five biggest commercial banks hold nearly half of the nation’s bank assets; in 1990, the five biggest held just 10 percent.

Retailers that look to be rivals actually turn out to be brands of a single firm. A company called Luxottica owns LensCrafters, Pearle Vision, Sunglass Hut, Sears Optical and Target Optical. Online shoppers for flights and hotels may be less than thrilled to learn that once the Expedia-Orbitz merger is completed, the combined company and Priceline will control all the online vendors. Hyatt is considering buying Starwood, itself the owner of the Sheraton, W and St. Regis brands.

October was the fifth-biggest month ever for mergers and acquisitions. So far this year, the value of those deals is roughly $4 trillion, creeping up on the all-time record of $4.3 trillion, set in 2007, just before the crash. These numbers, as one study after another demonstrates, are bad news for consumers, workers and start-ups. As David Dayen writes in the current American Prospect, “market power overwhelms . . . efficiency gains.” Northeastern University economics professor John Kwoka’s study of 46 mergers found that 38 resulted in significantly higher prices. Other studies have shown that the decline in the number of new companies is partly due to the increasing market power of corporate giants, while economists Jason Furman, chairman of the President’s Council of Economic Advisers, and former Obama administration Office of Management and Budget director Peter Orszag have calculated that the rise in inequality has been driven in part by the extraordinary rewards to executives and shareholders of firms that dominate their field. (Internet giants, we’re looking at you.)

But the unchecked combination of mega-firms tells just half the story of the rising imbalance of wealth and power (both market and political). The other half is the legal obstacle course that makes it effectively impossible for consumers to come together, and for workers to form unions. The New York Times’s series last week on the rise of compulsory, company-controlled arbitration when consumers have a grievance made clear that in purchasing the services of a phone, cable, credit card, car rental or many other companies, tens of millions of Americans have signed contracts that forbid them from filing or joining class-action suits. Rather than being able to share the expense of taking a corporate giant to court for widespread abuses, consumers are compelled either to take on those giants and assume the court costs themselves or to submit to company-appointed arbitrators ruling on their complaints.

It’s only in the past few years, the Times documents, that these clauses banning consumers from coming together have become standard in many companies’ contracts — the same years during which these companies have boosted their own clout by coming together. American business understands the power to be gained from concentration. It’s why companies concentrate themselves, and why they deny that power to their consumers through the fine print in their contracts, and to their workers through outsourcing their jobs to contractors, labeling them independent contractors or obstructing their efforts to form unions.

Today’s workers and consumers are hardly the first to suffer the consequences of corporate concentration and citizen atomization. At the turn of the 20th century, our forebears took on the Standard Oils and Carnegie Steels of their day with movements demanding antitrust legislation and more worker rights. The 1912 presidential election featured a running debate between Woodrow Wilson, campaigning on a platform of breaking up the trusts, and Theodore Roosevelt, who campaigned on a platform of tightly regulating their pricing practices.

We need such a discussion and such a movement today. These are economic and moral necessities, but, more important to aspiring political leaders, they also touch something deep in the American strain. The upside of American individualism has always been a suspicion of bigness, a resistance to monopoly, a preference for David over Goliath. Leaders who can disenthrall themselves from the sway of super PACs will find a ready audience for breaking up the money combines and letting people come together.

Harold Meyerson is the executive editor of The American Prospect, writes a column for The Washington Post. that appears on Thursdays and contributes to the PostPartisan blog.