The series is a nice reminder that although comic books are derided as a kids’ medium, their supernatural setups can provide us with clarifying thought experiments that allow us to approach our present dilemmas with fresh perspectives. 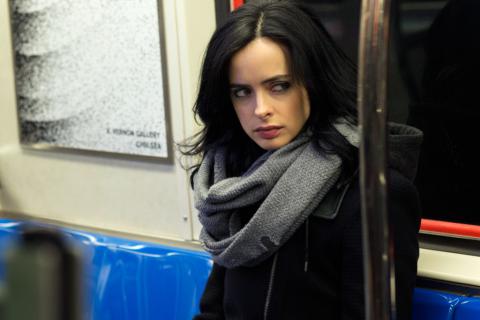 Krysten Ritter in Netflix’s new Marvel series, “Jessica Jones.” , Myles Arnowitz
This post discusses the plot of some episodes of “Jessica Jones” in a broad terms.
“Jessica Jones,” the new series about a private eye (Krysten Ritter) who has given up on superheroics, arrives on Netflix today as the most fully realized and human-feeling of the Marvel television shows to make it to the small screen. Unlike “Daredevil,” it leavens its grimness with humor and one of the more plausible, grown-up romantic relationships in the whole franchise, between Jessica and bartender Luke Cage (“The Good Wife” veteran Mike Colter). “Jessica Jones” has dandy action choreography and a fluid sense of how its characters’ powers would function up against human antagonists.
And “Jessica Jones” has one of the best supervillains in recent memory: Kilgrave (David Tennant), who has the ability to take over his victims’ minds completely, at least for a certain period of time and from a certain geographic distance. While Kilgrave sexually abuses only some of his victims, his ability to take away their free will lets “Jessica Jones” stage interesting conversations about consent, who can lose it and what it means to have been deprived of your agency.
In the real world, those discussions have become deeply entangled in larger debates about the politics of college campuses and sexual assault law. “Jessica Jones” may not be able to break those deadlocks. But it at least gives us new ways into fraught ideas.
Kilgrave’s victims can be anyone: young, attractive women he wants to sleep with; a musician whose talent he covets; a decent policeman, Will Simpson (Wil Traval), whom Kilgrave wants to exploit to gain access to his victims; a marginal older man he tortured for the fun of it; and in one horrifying instance when he wants to upset Jessica deeply, a child. At least in the early episodes of the series, he’s loss of free will personified, and “Jessica Jones” is an unnerving reminder that no one is immune from him.
That doesn’t mean that his victims’ experiences are the same. When Kilgrave’s targets meet in a tentative support group, Jessica is the only one of them who wants to take action to try to stop Kilgrave; the rest of them would do anything it takes to stay off his radar for the rest of their lives. But the fact that Jessica managed to free herself from Kilgrave’s puppetry doesn’t make her morally superior to her fellow survivors, and it doesn’t mean she has recovered from the experience. If anything, her eventual escape makes Jessica feel worse about the things that she did under Kilgrave’s influence and the fact that she wasn’t able to shake off his control over her sooner.
Among the many strengths of “Jessica Jones” is the sympathy the series’ creators show for people who do dreadful things under Kilgrave’s influence, and their insistence on the possibility of reconciliation. Early in the series, Will Simpson attacks another character while under Kilgrave’s direction. His assault is violent and upsetting: We see Will’s victim suffer terribly. But while “Jessica Jones” allows him to feel guilt and culpability for what he did under Kilgrave’s control, the subsequent episodes show him apologizing to and attempting to make amends to his victim. The bad thing this decent man did may not be his fault, but whether he reaches for redemption and redress is squarely his responsibility.
In a similar way, one of the more subtle, and useful, things Kilgrave’s powers do for “Jessica Jones” is that they mean the show can draw a clear distinction between the times when Jessica has genuinely been robbed of her free will and ability to consent, and the occasions on which she’s just making terrible, self-destructive decisions. It’s one thing when, under Kilgrave’s instructions, Jessica is forced to play out his sexual fantasies or cause harm to someone else. It’s something else entirely when, free of his influence, she drinks too much or has sex with someone when the better choice might be to go home alone. Those are Jessica’s choices, and “Jessica Jones” lets her carry the weight of them rather than passing them on to Kilgrave.
This is a refreshingly grown-up perspective on Jessica’s situation. And the series is a nice reminder that although comic books are derided as a kids’ medium, their supernatural setups can provide us with clarifying thought experiments that allow us to approach our present dilemmas with fresh perspectives.
Alyssa Rosenberg blogs about pop culture for The Washington Post's Opinions section.