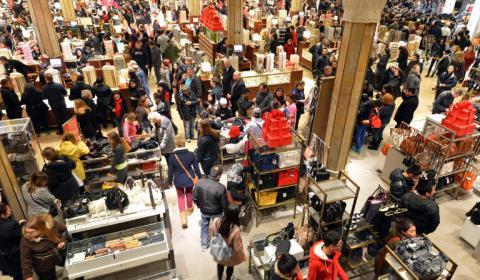 We need to improve the condition of workers this Thanksgiving weekend.

Black Friday and Cyber Monday may mean great deals for shoppers but they can be a terrible deal for the millions of retail and warehouse workers who are forced to work long, unpredictable hours. Recently, many stores have even stayed open on Thanksgiving, preventing workers from spending the holiday with their families and friends.

But the worst part is that so many of these workers are used to all this. That’s because employers aren’t just giving workers unstable, unpredictable shifts during the hectic holiday season — they’re doing it all year round. According to a recent study by Retail Action Project, nearly 40 percent of retail workers are given irregular schedules that wreak havoc on their lives.

That hourly employee who just helped you find the perfect sweater for your grandmother might be scheduled for 10 hours one week and 30 the next. She might be scheduled for mornings one week and evenings the next, with no set pattern, and only two or three days’ advance notice. She might pay her babysitter and commute for an hour, only to be sent home without pay because business is slow.

I say “she” because women make up two-thirds of low-paid workers and shoulder the majority of caregiving responsibilities. This means they’re especially affected by unstable scheduling practices. And their children feel it, too. Research by the Economic Policy Institute shows that children’s language and problem-solving skills may suffer when their parents have unpredictable schedules.

Recently, a number of major retailers, including Gap and Urban Outfitters, have promised to end one of their most abusive scheduling practices: on-call scheduling. This is the practice of requiring employees to be available in case they’re needed for a shift without guaranteeing any actual work or pay.

Ending on-call scheduling is a good step forward but retailers need to do much more.

And they can. While companies claim that they need to rely on unstable scheduling practices to maximize their profits, there’s very little evidence that these practices save money. Instead, they lead to costly turnover rates and unhappy employees.

What’s more, successful businesses such as Costco and QuikTrip show it’s possible to turn a profit while giving workers stable, predictable schedules. With set opening and closing hours and fairly predictable needs for staff, retailers can do the decent thing and give their employees stable schedules that let them plan their lives.

You can do your part, too. When you hit the stores this holiday season, choose retailers with good scheduling practices. Make a difference for low-paid workers by heading to stores that have promised to stay closed on Thanksgiving, such as Patagonia, Costco and Half Price Books.

We need to help businesses understand that when they do right by their employees, they’re also helping our families, communities and economy.

Jenny Wittner is the associate director of Women Employed, a 42-year-old advocacy organization that mobilizes people and organizations to expand educational and employment opportunities for America’s working women. She can be reached at pmproj@progressive.org.