An End To Right's Reign In Spain?

Whatever party ends on top in the Spanish election, it will have to form a coalition, thus ending the reign of the two-party system that has dominated the country since Franco. Late polls show the right-wing PP taking a beating, dropping from 44 percent that it won four years ago to 28%, but it will still win the largest number of votes of any one party. Followed by the Socialists, at 21%, the center-right Ciudadanos Party at 19%, and the left-wing Podemos Party at 15.7% 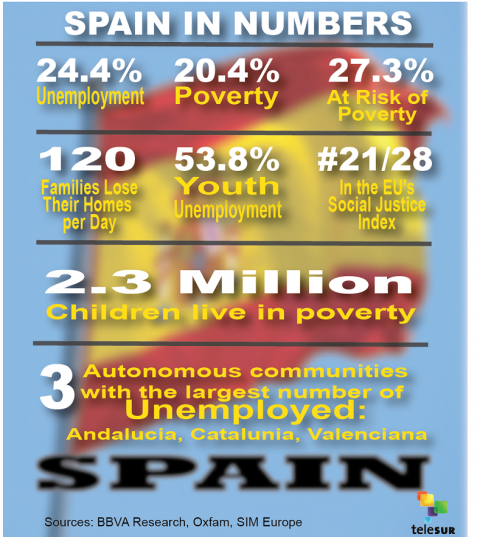 "Volatile" seems to be the adjective of choice for pollsters going into the Dec. 20 Spanish elections, a balloting that will likely not only change the face of politics in the European Union's (EU) fifth largest economy, but one that will have reverberations throughout the 28-nation organization. Long dominated by two parties-the right-wing People's Party (PP) and the center-left Socialist Workers Party-the political landscape has atomized over the past two years. "For the first time in general elections in Spain," says Manuel Mostaza Barros of Sigma Dos poll, "we have four parties polling above 15 percent when it comes to voter intentions."

What levers [AB1]  those voters pull is very much up for grabs. Polls indicate that 41 percent of the electorate has yet to make up their minds. But whatever party ends up on top, it will have to go into a coalition, thus ending the reign of the two-party system that has dominated the country since the death of fascist dictator Francisco Franco in 1975.

The latest polls indicate that the right-wing PP will take a beating, dropping from the 44 percent that it won four years ago to around 28 percent, but it will still win the largest number of votes of any one party. Behind the PP are the Socialists, with close to 21 percent, followed by the center-right Ciudadanos Party at 19 percent, and the left-wing Podemos Party at 15.7 percent.

However, with a chunk of the voters yet to make up their minds, "These are the most volatile elections of recent years," says pollster Mostanza. Pablo Iglesias of Podemos says, "We're expecting a bumpy ride with political turbulence."

Spain is just beginning to emerge from five years of draconian austerity that drove the national jobless rate to 27 percent, and above 50 percent in the country's south and among its young people. While growth has finally returned, unemployment is still 22 percent, and far higher for those under 35. The gap between rich and poor has sharply widened, and many workers have lost their modest state support, because they have been jobless for more than two years.

The PP's Prime Minister Mariano Rajoy has been campaigning on a program of "stay the course because things are improving." The Party's slogan is "Espana, en serio" ("Spain, seriously"). Opponents have added a question mark to the end of that sentence.

It is true that Spain's economy is growing-3.1 percent in 2015, and projections for 2.7 percent in 2016-but the austerity program had little to do with that turnaround. The fall in the euro's value has lifted Spain's export industries, and the precipitous drop of world oil prices-from $114 in 2014 to $35 today-are the major reasons Spain has clawed its way out of recession.

Spain's woes began with the American banking crisis of 2007-08, which crashed Spain's vast real estate bubble and threatened to bring down its financial system. At the time, Spain had a budget surplus and a modest debt, but speculators drove borrowing rates so high that the country found itself on the edge of default.

The Socialists were in power at the time and accepted a "bailout" from the "Troika"-the European Central Bank, the European Commission and the International Monetary Fund.  The term "bailout" is a misnomer, since most of the money went to the speculators: German, Dutch, French and English banks. And the "price" the Troika demanded in return was a savage austerity regime that threw Spain into a five-year recession, impoverishing millions of its citizens, and driving the jobless rate to over a quarter of the country.

However, the Spanish did not go quietly into that good night. Starting in 2011, hundreds of thousands of  "indignatos" occupied the plazas of Spain's great cities, a massive outpouring of rage that eventually led to the formation of Podemos-"We can." The Occupy Wall Street movement in the U.S. was an offshoot of the plaza demonstrations.

Podemos shocked the country in 2012 by winning 8 percent of the vote in the European parliamentary elections and eventually polling as high as 24 percent, making it the second largest party in the country. Since then its poll numbers have fallen for a variety of reasons, but it is still likely to win close to 50 seats in the 350-member parliament.

There are a number of complicating factors in the upcoming elections, some national, some regional, particularly in the case of Spain's wealthiest province, Catalonia.

The Spanish newspapers and the international media are harping on Podemos' declining support-some have been hard pressed to dampen their obvious glee-but the 27 percent was always a soft number. Indeed, Podemos activists charge that the figures were deliberately inflated so that when later polls reflected a decline in support, the media could claim that the left party was "out of steam."

The mass media-dominated by Spain's elites-have been relentless in their attacks, and Podemos, the most resource-poor of the four major parties, has struggled it get its message out. But the party is a grassroots organization, and it knows how to get out the vote. Plus, in last May's regional elections Podemos-allied candidates were elected mayor in Madrid, Barcelona, Cadiz, Zaragoza and several other cities.

Ciudadanos is the wildcard in this election. Originally a Catalan-based party formed to oppose the push for Catalonian independence, it now has a national profile. It is also anti-abortion and anti-immigrant, and its economic policies are closer to the PP than the Socialists, let alone Podemos. It is, however, deeply critical of the PP's corruption, and generally supports the kind of constitutional changes favored by the more left forces.

The Party's telegenic leader, Albert Rivera, is hard to pin down on anything but Catalonia and taxes: he opposes independence and he wants to cut business taxes. Whether voters will be attracted to the party's vague centralism remains to be seen.

Catalonia was conquered by a joint French and Spanish army during the War of the Spanish Succession (1701-14) and has never quite reconciled itself to rule by Madrid.

Podemos took some losses in the Sept. 27 vote, largely because they are caught in the middle. The Party does not want Catalonia to break away from Spain, but it also supports the right of the Catalans to hold a referendum to decide the matter. Standing on the sidelines is not a successful formula in polarized Catalonia.

Just as it did in the Greek and Portuguese elections, the EU has waded into the Spanish elections. Brussels has showered the PP government with praise, and the Troika has eased up on its austerity demands, allowing the PP to put forth modest spending increases for education and social services. The EU has also warned Catalans that if they break free from Spain, they cannot assume they will be able to maintain their membership in the organization. Similar threats were aimed at Scotland when it was considering breaking free from Great Britain.

The EU and the PP have also warned Spaniards that if they don't support the PP's economic program, they could end up like Greece. That line of argument didn't work in last month's elections in Portugal, where a coalition of center-left forces has taken control despite a massive media campaign warning the Portuguese that failure to support the right-wing government's austerity policies would lead to ruin and damnation. Images of Greek pensioners lined up at banks flooded television ads.

But Portugal has now become a model for a center-left takeover. Initially the right-wing coalition claimed that, because it received the largest number of votes, it should continue to rule. The right-wing Portuguese president agreed and re-appointed the old government, a maneuver that lasted a little more than a week, when they were voted out of office by the progressive coalition.

The PP's Rajoy supported the position of the rightist Portuguese government even though it had received only 38 percent of the vote. The final outcome in Lisbon may be a re-run of Portugal: Rajoy gets the most votes of any single party, but not enough to rule.

The difference in Spain is Ciudadanos. The Spanish party is much more conservative than the center-left Socialist Party in Portugal, and there is a possibility that it could go into coalition with the PP. That would give a center-right government a majority in the parliament.

Whatever the outcome, nothing is going to be quite the same in Spain after Dec. 20. The right-wing will almost certainly lose its majority, and that, in turn, will crimp Rajoy's efforts to intimidate the media and criminalize mass demonstrations through the Citizens Security Law that the PP rammed through Parliament. It will also mean a setback for the policies of the Troika. And one hopes, an antidote to the growing strength of racist and xenophobic forces in Europe.

[Conn Hallinan is a columnist for Foreign Policy In Focus. For more of Conn Hallinan's essays visit Dispatches From the Edge. Meanwhile, his novels about the ancient Romans can be found at The Middle Empire Series.]