Universities giant and small, public and private, bring African-American men to campus at grotesque levels to earn the school millions in football and basketball revenues. Stories about academic freedom and free speech have been appearing in newspapers more frequently over the last few weeks. And curiously enough political actors on and off campus who traditionally have been least likely to be concerned about these subjects are becoming its major advocates. 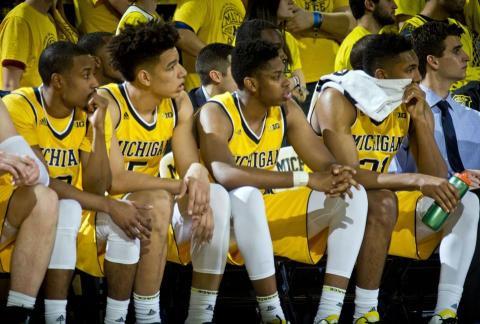 Michigan guard Muhammad-Ali Abdur-Rahkman, forward D.J. Wilson, guard Kameron Chatman, and guard Zak Irvin reacted to game action on the bench in Ann Arbor, Mich., in November., Tony Ding/Associated Press // The Boston Globe
The Height of Hypocrisy in Higher Education
By Derrick Z. Jackson
December 13, 2015
The Boston Globe
I was only half satisfied to see how the protest of black football players at the University of Missouri helped to oust the school's racially insensitive president and chancellor. On its surface, the protest was exactly what I asked for earlier this fall at a symposium on black athletes at the University of New Hampshire: "There is much to be optimistic about if today's and tomorrow's black athletes choose to use their influence to change attitudes, chip away at disparities, and smooth the way for those in so many other crafts and professions," I said. "The challenge today is whether today's athletes, under so much pressure to conform into silence, will find a new voice. It could be as loud as Muhammad Ali's, as graceful as Tony Dungy's, or as symbolic as LeBron James's. The point is that it be heard, for the whole nation to hear."
But even as Missouri's football players met that challenge, their protest laid bare one of the greatest standing hypocrisies of higher education. Universities giant and small, public and private, bring African-American men to campus at grotesque levels to earn the school millions in football and basketball revenues. In a figurative - and nearly literal sense - at many schools, if athletes did not speak up about racism or anything else, there would be no black men at all to be heard.
In Division 1 sports nationally, an African-American male is 13 times more likely than a white male to be on football and basketball scholarship. That should be distressing enough. And yet that figure swells dramatically at schools that had a football or basketball team in the Associated Press's Top 25 rankings in mid-November - to 32 times more likely. Schools where an African-American was more than 50 times more likely to run the ball and risk brain damage, or dunk the ball and ring up the cash register for the dear ol' university were University of Southern California, Utah, Florida State, Ohio State, and Gonzaga.
Only 1 out of every 168 white men is a scholarship football or basketball player across Division 1. At Wisconsin, Stanford, and Kansas, to name a few, that ratio for black men is 1 in 7. At Vanderbilt and Duke, 1 in 5. At Oregon, Gonzaga, and Notre Dame, 1 in 4. At Villanova and Texas Christian, it is 1 in 3, and at Utah, every other black male is a scholarship football or basketball player.
Such ratios are an indictment against universities - many use black athletes up and spit them out without degrees. Even when the black athletes do graduate, colleges still send a negative underlying message that black men are only worth educating if they can also play ball. The American university thus remains one of the biggest agents in maintaining stereotypes that say ordinary black men can't think.
If colleges do not take up the challenge to look at black men as something other than athletes, the Missouri protest will forever be only a fractional victory. The black men of the nation's top collegiate football and basketball teams are too often stand-ins for the black men who ought to populate other crafts and professions.
Used
In Division 1 sports, a black male is often many times more likely to be on a football or basketball scholarship than a white male.
Click here, then hover over or tap a circle to learn more about the school