Police Killings: Why We Must Keep Counting

The Counted has made up for the Obama administration’s failings, but the lack of oversight remains. So we will restart our count of people killed by police until the government does its job 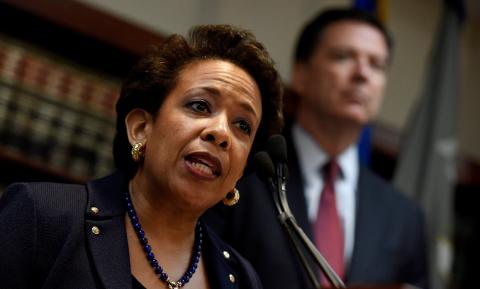 The US attorney general, Loretta Lynch, and FBI director, James Comey. The US Justice Department will restart its count of killings by police in 2016, but the system will remain voluntary – and flawed., Justin Lane/EPA
At the beginning of 2015, the Guardian began a grim task – to record the death of every person killed by American police officers – for a simple reason: astonishingly, the United States government publishes no such record.
Even as protests and calls for systemic policing reforms continued after the killing of Michael Brown in Ferguson, Missouri, the US Justice Department’s best data scientists could not provide a figure for how frequent officer-involved deaths had become. The government scientists had been starved of funding.
Even as Barack Obama pressed his post-Ferguson policing taskforce on “the need to collect more data” for “appropriate oversight”, the FBI director admitted his agency’s oversight system was broken: “It’s ridiculous that I can’t tell you how many people are shot by police in this country right now,” James Comey said earlier this year.
The Guardian did what the US government by its own admission had failed to do for its own citizens: we counted.
"
The rate of death for young black men was five times higher than white men of the same age
"
We counted 177 deaths of young black men – 15% of all police killings this year, despite African American males making up just 2% of the country’s population. We counted 246 deaths of people about whom mental health issues had been reported – eight of which were officially ruled a suicide. We counted 124 deaths caused not by gunshot but by some other use of force – including Freddie Gray, who died after sustaining injuries in the back of a police van in Baltimore, where six officers face criminal trials in 2016 in connection with his death.
We have counted 1,134 total deaths at the hands of American police in 2015. That is approaching three times greater than the 444 “justifiable homicides” logged by the FBI’s entire team of government researchers for all of last year.
Just as the police killings have multiplied, so has the powerful protest movement against them – only with too little meaningful change. More than 15 police officers have been charged with manslaughter or murder this year – including one in Virginia first brought to widespread attention by the Guardian, one in Chicago that led the firing of the police chief and the institution of body cameras, and one in South Carolina that, like so many other encounters caught on video this year, went viral. But there seems to be no justice in Cleveland, where the mother of 12-year-old Tamir Rice must now live with the reality of an officer who killed her son going free. And there is no peace for the families of so many people – predominantly men, disproportionately black – whose lives do not register even as a number.
There can be no progress without more comprehensive context.
“It is unacceptable,” James Comey said in October, that “the lead source of information about violent encounters between police and civilians” has become the media – specifically naming the Guardian and the Washington Post, which began publishing a database documenting only fatal police shootings one month after The Counted was released to the public.
“That is not good for anybody,” Comey said. “It’s ridiculous – it’s embarrassing and ridiculous.”
He was right. Indeed, the ongoing absence of appropriate official oversight is an affront and is no longer tolerable.
So the FBI announced plans to overhaul its failed undercount, promising to publish a wide range of data beyond shootings and in relative real-time, with a system resembling The Counted. But that count will remain voluntary for police, and thus grossly incomplete once again. What if only a fraction of the 18,000-odd police departments in the US have the decency to report themselves, when officers kill the people they are sworn to protect?
The Justice Department’s data scientists have restarted their count, too, as the federal government deemed arrest-related deaths once again meaningful enough statistics to log alongside lawn care and peanut consumption. But what if this open-source system, which researchers say could pick up where the Guardian might stop counting, misses significant incidents? What if the world never knew that somebody had died?
Senators Cory Booker and Barbara Boxer have called for the US Congress to mandate that all police departments report when they are responsible for someone dying – which they should. Boxer has called the Guardian’s work “the wind at our back”. But their legislation has languished in the Republican-controlled Senate, as Comey and other Obama cabinet members talk without measurable facts about a “Ferguson effect” of viral videos and anti-police protests leading to more crime.
America’s crisis of police violence is one that those at the highest levels of power have only just begun to comprehend. If the public cannot have a basic understanding of the scale of the problem, how can we begin to properly grapple with the solutions? What good is a body camera if hundreds of uncounted lives do not officially matter?
These unanswered questions compel us to directly hold the government to account by continuing to monitor deaths in parallel with the Obama administration’s two promised official efforts. The Guardian will begin a new count of people killed by US police for 2016, tracking the lethal use of force every day with the help of the community. We will not stop until we are satisfied that the federal government is doing its job, and that we no longer have to do it for them.