The transformation of police practices in this country cannot happen without a national reckoning regarding the ways both white supremacy and misogyny have shaped and continue to influence law enforcement practices in the United States. 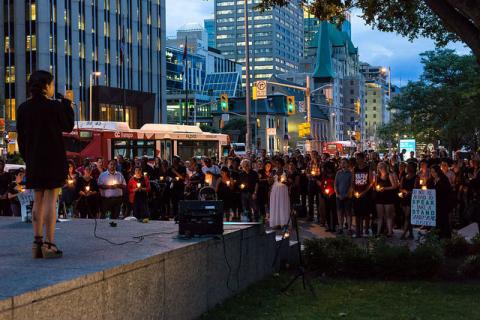 Mourners and demonstrators gather for a candlelight vigil on July 13, 2015, in Ottawa, Canada, in honor of Sandra Bland, who was found dead in a Waller County jail cell in Texas., Robert Fairchild

On December 11, 2015, a jury convicted former Oklahoma City police officer and serial rapist Daniel Holtzclaw. On December 15, 2015, the US Department of Justice (DOJ) released - for the first time ever - guidance on "Identifying and Preventing Gender Bias in Law Enforcement." And on December 22, 2015, a grand jury refused to indict anyone for the death of Sandra Bland in a Texas jail cell. These events reveal a truth about law enforcement in the United States that has remained in the shadows for too long: Police departments across the country have well-documented histories of devaluing and brutalizing women of color. But women (and particularly Black women) are not just victims of police misconduct; they are also leading the movement to transform this entrenched system of injustice.

Until recently, Detroit had a backlog of 30 years' worth of rape kits, the contents of which had never been processed nor the underlying crimes investigated by the city's police department. Eighty-one percent of Wayne County victims whose kits were never tested were Black. As a result, women who were subject to often brutal attacks never had the opportunity to learn the identity of their attacker or receive a semblance of justice for the pain they suffered. What they did learn is that they were not valued by the system. It was not until Wayne County Prosecutor Kym Worthy galvanized female business leaders in the Detroit community to raise private funds that the testing of decades' worth of rape kits went forward. As a result of the private sector's involvement, victims in that city have begun receiving attention that is long overdue.

Such disregard for rape victims of color is not unique to Detroit. In 2010, the DOJ uncovered a pattern of misconduct in the New Orleans Police Department's sex crimes unit, which included the failure to test rape kits, "downgrading" of rape complaints and victim-blaming for sexual assaults. Since then, the police department entered into a consent decree with the DOJ, aimed at fixing both the kit backlog and officers' treatment of victims. But as recently as August 2015, problems persist in the sex crimes unit. Women With a Vision, a New Orleans nonprofit organization founded by a grassroots collective of African-American women, fills the void left in the wake of the DOJ consent decree. The organization advocates for the "human rights protection of street-based sex workers" who often endure sexual abuse on the streets and are then subject to "the threat of prosecution even when reporting violence done to them."

Chicago law enforcement has exhibited a similar lack of respect for female crime victims. Significant public attention has been paid over the years to Chicago's spate of wrongfully convicted men(mostly men of color) who were arrested by police for crimes they did not commit. What has been less of a point of focus is the women who were victims of these crimes. Officers intentionally bungled these investigations. As a result, innocent men languished in prison and the lives of the women and girls who were victimized were devalued.

This is true for Nina Glover, a rape and murder victim in the Englewood neighborhood of Chicago in 1994. As alleged in a civil suit brought on behalf of our client, Terrill Swift, he and four other teenagers were coerced by detectives into confessing to the crime. Consequently, the true perpetrator, a serial rapist, was never caught. The same is true for Sharon Haugabook, a woman killed execution-style in 1992, but whose murder went unanswered when Daniel Taylor, also a client, and other Chicago teens were forced to confess to her murder. They have since been exonerated and have also brought suit against the City of Chicago. Haugabook's murder was never solved.

Outside Chicago, nearby Lake County, Illinois, has been similarly plagued by wrongful convictions. Last May, Lake County resident Jason Strong was released by the state, cleared of murdering Mary Kate Sundelin, a disabled woman who was not even identified until six years after Strong was convicted. To say Sundelin was denied a fair investigation is an understatement. The list of men in this area of the country who were falsely imprisoned - and the female victims whose murders went unsolved - goes on.

There is also ample evidence that Chicago police officers regularly abuse women while on the job. Chicago paid out over $500 million between 2004 and 2014 to compensate people alleging violations of their constitutional rights by police. Contributing to this number are numerous settlements on behalf of women who endured physical brutality at the hands of law enforcement, as detailed in a complaint concerning police misconduct in Chicago that we submitted to the DOJ on December 7, 2015. Women allege in court filings that Chicago police slammed them into cars, choked them, punched them, beat them with blunt objects and taunted them based on their perceived sexuality. The most well-publicized case is that of Rekia Boyd, who was shot to death by an off-duty police officer in 2012. He has since been acquitted of her murder.

There can be no doubt that women, and particularly women of color, are consistently targeted, abused and discriminated against by those in uniform. But as documented by the Black women leading the Say Her Name movement, while the names of men of color who are murdered by police officers become rallying cries, the names of women who endure brutal maltreatment are too often relegated to obscurity. Sparked by community outrage after the police shooting of 17-year-old Laquan McDonald, the DOJ, this December, launched an investigation into the Chicago Police Department's use of force. But the US attorney general's announcement of the investigation contained no mention of the federal agency's intent to examine police handling of crimes against women or uses of force directed at women. Nor have interventions by the DOJ in other jurisdictions included a gendered focus - though the subsequent federal investigations unsurprisingly revealed police cultures that tolerated violence against women.

Women may be sidelined by official systems of inquiry, but as the Detroit and New Orleans examples make clear, it is women who are leading the crusade nationwide to change policing practices that terrorize people of color. It was three Black women who began the Black Lives Matter movement that roused a countrywide following and sparked civil rights protests throughout the United States. The Black Youth Project and We Charge Genocide are two efforts largely led by Black women that have focused the nation's attention on the abusive law enforcement culture in Chicago and elsewhere. Both groups have called repeatedly for justice on behalf of women mistreated by police.

Largely because of the advocacy of Black women throughout the country, the nation is paying unprecedented attention to the violence and misconduct perpetuated by police officers in communities of color. But the narratives shaping the nation's focus belong almost entirely to men. This must change. The epidemic of police brutality, misconduct and discrimination undeniably affects women and especially Black women, who are targets of abusive police interactions - whether that abuse takes the form of police violence or a refusal to take crimes against Black women seriously.

The transformation of police practices in this country cannot happen without a national reckoning regarding the ways both white supremacy and misogyny have shaped and continue to influence law enforcement practices in the United States.

Sheila A. Bedi is a clinical associate law professor at Northwestern University law school and an attorney at the Roderick and Solange MacArthur Justice Center. She was a fellow with The OpEd Project's Public Voices Fellowship at Northwestern.

Alexa Van Brunt is an attorney and clinical assistant professor with the Roderick and Solange MacArthur Justice Center at Northwestern University Law School and a Public Voices Fellow with The OpEd Project.