The likelihood is that the shortfall in retirement assets is going to become grimmer with time. Yes, more companies are offering 401(k) plans, but in the Uberized "gig economy" fewer workers may even have an employer to offer them. 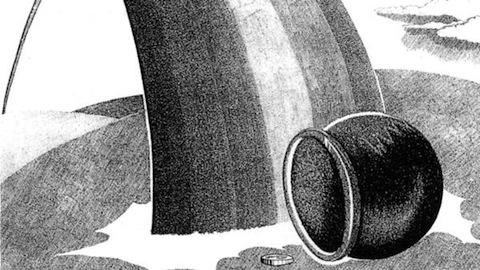 One persistent feature of the conservative attack on Social Security, and especially on the emerging campaign to increase benefits, is the notion that the typical American will do just fine in retirement just as it is.

Andrew G. Biggs of the pro-business American Enterprise Institute has been especially vocal on the topic in recent weeks, with articles in the Wall Street Journal, Washington Post and Forbes appearing all since just before Christmas. The pieces overlap in their treatment of the theme, which is succinctly defined by the headline in the Journal: "New Evidence on the Phony 'Retirement Crisis.'"

Biggs' chief goal is to support Republican ideas about "restoring Social Security to solvency — by reducing benefits for high earners or raising the retirement age" and dismiss the Democratic goals of raising benefits and expanding eligibility. The latter options, he wrote in the Post, are "unnecessary and unaffordable."

It's proper to examine his "evidence" and its implications. It's also important because fears about retirement income are widespread — 59% of those polled by Gallup in 2014 were "moderately" or "very" worried about not having enough money for retirement, making it the top financial concern among all respondents. If the prospects are as bright as Biggs says — if "Social Security’s promised benefit levels are far more adequate than is often portrayed," as he told the Journal's readers — lots of people can breathe easier.

The foundation of Biggs' argument is a calculation of the Social Security "replacement rate." That's the percentage of a retiree's pre-retirement income represented by his or her benefits. A common rule of thumb is that retirees need about 70% of their pre-retirement income to maintain their lifestyle after leaving the workforce, though not all is expected to be provided by Social Security.

The "new evidence" on replacement rates cited by Biggs comes from the Congressional Budget Office in a recent paper. For middle-income workers born in the 1960s — that is, the cohort likely to start retiring about a decade from now — CBO pegs that rate at about 56%, assuming that benefits aren't cut before then. (The CBO performed a range of calculations; for example, for the lowest-income workers, who receive larger benefits relative to their working income, the replacement rate will be about 95%.)

Biggs says that such a replacement rate implies that Social Security will give these recipients a solid foundation for a comfortable retirement. But it's important to note that replacement rates are notoriously slippery. For one thing, the new figures are the product of a new standard for calculating the rate.

Among other things, instead of measuring Social Security benefits against retirees' lifetime earnings, including years of low earnings at the beginning and end of one's career (when the worker may shift to part-time work or stop working at all before filing for Social Security), the new standard measures benefits only against workers' substantial earnings late in life. That's a better benchmark to judge the difference in lifestyle pre- and post-retirement, and it's endorsed by the Social Security Administration, more or less.

Yet, Social Security's chief actuary estimates a much lower replacement rate than the CBO for middle-income retirees — in the neighborhood of 39%, not much different from the figure under the old calculation. Experts aren't quite sure how to account for the discrepancy, but until it's resolved Biggs should explain why he chose the higher figure.

(The Social Security trustees dropped replacement rates from their annual report starting in 2014, at the behest of "critics who argue that all is right in the world: People will have plenty of money in retirement" and who complained that the official figures were too low, according to Social Security expert Alicia Munnell. But they're still published periodically by the chief actuary's office.)

In any case, the CBO also estimates the average initial Social Security benefit for those 1960s-cohort middle-income retirees at $19,000 a year, which would place their late career earnings at about $34,000. Economist Dean Baker of the Center for Economic and Policy Research asks cogently: "Is $19,000 a year a middle-class income?" Most Americans wouldn't think so, yet this is the retirement benefit that Biggs argues makes the retirement crisis "phony."

Biggs bolsters his argument with another assertion that's very questionable. He argues that income from "401(k) and other plans" added to Social Security will allow the "typical worker" to bring his or her replacement rate to 70% or even 80%.

Biggs observed in the Washington Post that Americans' overall retirement assets are bursting at the seams, with 401(k) and Individual Retirement Account balances and benefits due from traditional pensions and Social Security having risen from 2.7 times total personal incomes in 1996 to 4.1 times in early 2015. Assets set aside for retirement are at "record levels," he has written, noting that the total incomes of Americans age 65 or older are equal to 92% of the national average income, a higher percentage than Sweden, Germany and Denmark.

Yet using these statistics to argue that the average American doesn't face a retirement crisis assumes that retirement assets are distributed among the population in the same proportion as working income.

Is this plausible? Doubtful, because the facts tell a different story. Wealth inequality is spreading through the economy, and the gap in retirement assets may be even wider. Enrollment in 401(k) plans and other retirement accounts rises sharply with income, as Natalie Sabadish and Monique Morrissey of the pro-labor Economic Policy Institute have shown. Of households in the top fifth of the income ladder, they found, 88% had assets in retirement accounts such as IRAs and 401(k) plans in 2010. Of those in the bottom fifth, only 11% had retirement accounts. Retirement savings of the top 20% averaged about 134% of annual income; for those in the bottom fifth it was 58%.

It's well documented that, while more workers today have access to 401(k) and other defined-contribution plans, few take full advantage of the ability to save. Such plans have their virtues, including the right to carry them from one employer to the next — a plus in an era when career-long employment with a single company is increasingly rare. But they shift market risks to workers and shortchange those who have to live paycheck to paycheck. As Baker points out, the record amount of Americans' retirement savings is "indeed good news for those who have these savings, but unfortunately most middle-class households don't fall into this category."

The likelihood is that the shortfall in retirement assets is going to become grimmer with time. Yes, more companies are offering 401(k) plans, but in the Uberized "gig economy" fewer workers may even have an employer to offer them.

The changing nature of work is going to place more responsibility, not less, on public programs such as Social Security, guaranteed retirement accounts such as those outlined recently by retirement experts Teresa Ghilarducci and Hamilton James, and state-sponsored programs similar to one moving toward fruition in California under the guidance of state Senate President Pro Tem Kevin de Leon (D-Los Angeles).

New ideas will be needed to keep Americans from impoverishment in old age. The idea that there's no crisis and nothing to be worried about is what's old and outmoded.