Robbing workers’ pension funds has long been central to Wall Street's business model. A recent Supreme Court ruling opened the door for financial managers to take their looting of those pension funds even further. 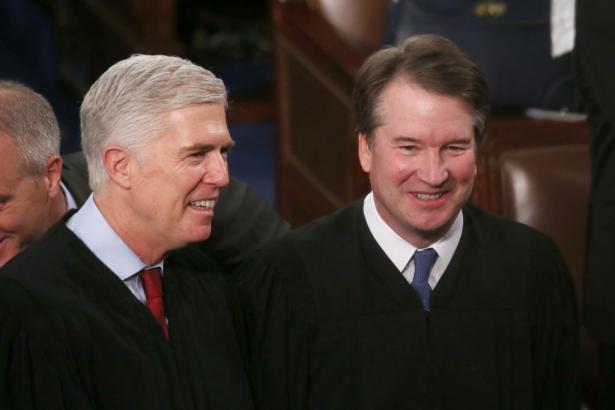 In the classic 1987 film Wall Street, pension funds make a brief but important appearance, as Gordon Gekko hatches a plan to steal six thousand airline workers’ retirement savings. An angry Bud Fox asks Gekko: “How much is enough?” — a question warning the audience about unbridled greed and the financial vipers in our midst.

Thirty-three years after the release of Wall Street, it seems the US Supreme Court saw the film as a guidebook rather than a cautionary tale: in a landmark ruling last week, Brett Kavanaugh and his conservative cadre undermined workers and retirees who might try to stop Gekko’s scheme at their own companies.

In the process, the ruling may have short-circuited a separate case that Wall Street was fearing.

Some background: In the last two decades, class action lawsuits have forced large employers to pay out more than $6 billion in cases alleging fraud and mismanagement of workers’ retirement savings. At the same time, financial firms hired to manage that money have been skimming hundreds of billions of dollars of fees off the pension funds, while delivering subpar returns. Last week, one report found that private-equity firms — which manage pension money — have raked in more than $230 billion in performance fees in ten years, while delivering returns that did not substantially beat a low-fee stock index fund.

Preventing employers and financial firms from robbing workers’ pension funds is critical, because the consequences of inaction can be devastating. The more stealing, the more fees — and the more underperformance, the more pressure there is to cut millions of workers’ promised benefits or have companies declare bankruptcy. In the case of public pension systems, benefits can be slashed, or taxes can be raised on everyone to backfill the losses.

In that case, the plaintiffs were two retired employees of the bank who alleged that the company engaged in self-dealing and inappropriately invested workers’ pension money in ways that allowed bank executives to pay “themselves excessive management fees . . . manipulate accounting rules, boost their reported incomes, inflate their stock prices, and exercise lucrative stock options to their own (and their shareholders’) benefit,” according to Supreme Court documents.

When the scheme produced a loss of more than $1 billion during the Great Recession, the plaintiffs sued to force U.S. Bank to pay $750 million back to the pension fund — a sum they argued was the amount of losses that was above and beyond what a standard investment formula would have produced in the same time period.

Now, here’s the punch line: rather than weighing in on the allegations of theft, Kavanaugh and his conservative cadre slammed the courthouse door on the plaintiffs and every other plaintiff like them, thereby creating the conditions for an impossible-to-deter crime spree.

Writing for the majority, Kavanaugh declared that “the plaintiffs themselves have no concrete stake in the lawsuit” and therefore have no standing to bring a case, because they themselves did not (yet) see their own pension benefits reduced.

In other words, even if the plaintiffs can prove that the pension fund itself was illegally fleeced, the majority ruled that the plaintiffs have no right to sue unless and until they can prove their own promised retirement payments were reduced because of the wrongdoing.

This may sound superficially logical — after all, if someone’s retirement benefit wasn’t cut, how can they sue for losses?

But drill down a bit and you realize that, in practice, the ruling creates a license for employers and financial managers to steal up to a certain level.

The court precedent effectively says that workers and retirees cannot sue for damages as long as an employer or a financial firm managing pension money steals less than an amount that totally bankrupts a pension plan to the point where current retirees get their benefits cut. They have no standing to sue, even if the theft has destabilized the pension system for the long haul.

That’s like saying that if your local bank manager is slowly draining your savings account, you can’t sue him until there’s literally no money left in your account, because up until that point, you still at least have enough cash in there to pay your monthly bills.

“The Court’s reasoning allows fiduciaries to misuse pension funds so long as the employer has a strong enough balance sheet during (or, as alleged here, because of) the misbehavior,” wrote Justice Sonia Sotomayor in her dissent. “Indeed, the Court holds that the Constitution forbids retirees to remedy or prevent fiduciary breaches in federal court until their retirement plan or employer is on the brink of financial ruin.”

To be sure, pension systems themselves may still be able to sue when they are bilked by third-party financial firms. The systems could still argue that they were directly harmed and therefore have standing. But the new ruling disempowers workers and retirees from taking legal matters into their own hands — which is a big deal.

In the private sector, the ruling leaves workers relying on legal action from corporate pension officials who probably aren’t going to take legal action against themselves in a situation like Thole, which was about self-dealing. Even in cases that aren’t about self-dealing, corporate pension officials might not want to rock the boat with powerful outside investment houses that may have other relationships with their company.

In the public sector, it’s a similarly bleak situation — workers whose pension funds are ripped off are now left to rely on legal action from public pension officials, some of whom may have been wined and dined by Wall Street firms, and others who may have been appointed by Wall Street–friendly politicians.

Implications for Another Case That Wall Street Fears

Sotomayor concluded that “after today’s decision, about 35 million people with defined-benefit plans will be vulnerable to fiduciary misconduct.” And beyond that, the Thole ruling may end up rescuing financial firms from a separate suit they’ve been desperately trying to halt.

In Mayberry v. KKR, Kentucky public workers and retirees are suing Wall Street giants including Blackstone and KKR, alleging that the companies misled their pension system about investments and ultimately delivered losses that contributed to the financial emergency plaguing the state’s retirement system. If it moves forward, the case — which was praised by the state pension system — could force the firms for the first time to let the public scrutinize high-fee hedge-fund investments.

That unto itself would be a significant development, as critics say the secretive investments are ripping off investors across the country.

Wall Street firms want to keep their fee gravy train going — and they know that the only way to do that is to keep details of these black-box investments concealed. And so they are doing everything they can to halt the case. Not only did they countersue the beleaguered state pension system that they already made big fees off of, they also sought to get the entire case dismissed. They are arguing that the workers do not have standing to bring the suit, because “they cannot show that their retirement benefits have been reduced because of any alleged losses caused by the hedge fund investments,” as the Lexington Herald Leader reported.

This echoes the reasoning Kavanaugh and conservative justices on the Supreme Court just cited in dismissing the Thole case.

Mayberry is now pending before the Kentucky Supreme Court — and experts say that state court could now easily cite the US Supreme Court precedent as its own rationale for throwing out the case.

“It would be an easy out for the Kentucky court to now take the Kavanaugh principal and deny standing to the Kentucky workers,” said Chris Tobe, a former Kentucky pension official and author of the book Kentucky Fried Pensions.

“If the Kentucky Supremes were of a mind to dismiss for lack of standing, they would certainly cite a recent US Supreme Court opinion reaching the same outcome,” he said. “This frequently happens when unsophisticated states don’t have a great deal of their own law in areas where there is a great deal of analogous federal law.”

David Sirota is editor-at-large at Jacobin. He edits the Too Much Information newsletter and previously served as a senior adviser and speechwriter on Bernie Sanders's 2020 presidential campaign.