food How coffee loves us back

Recent research at Harvard is just part of an emerging picture of coffee as a potentially powerful elixir against a range of ailments, from cancer to cavities 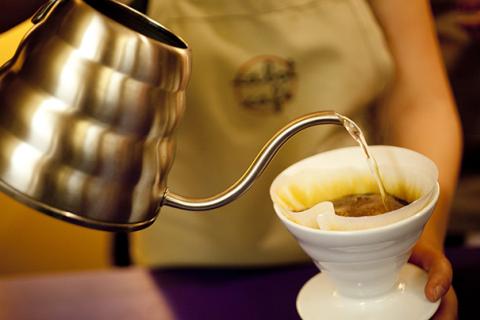 Coffee, said the Napoleon-era French diplomat Talleyrand, should be hot as hell, black as the devil, pure as an angel, sweet as love.
Bach wrote a cantata in its honor, writers rely on it, and, according to legend, a pope blessed it. Lady Astor once reportedly remarked that if she were Winston Churchill’s wife, she’d poison his coffee, to which Churchill acerbically replied: “If I were married to you, I’d drink it.”
Coffee is everywhere, through history and across the world. And increasingly, science is demonstrating that its popularity is a good thing.
Harvard scientists have for years put coffee under the microscope. Last year, researchers announced they had discovered six new human genes related to coffee and reconfirmed the existence of two others. The long-running Nurses’ Health Study has found that coffee protects against type 2 diabetes and cardiovascular disease. Researchers are continuing to follow up on 2001 findings that it protects against Parkinson’s disease.
The work at Harvard is just part of an emerging picture of coffee as a potentially powerful elixir against a range of ailments, from cancer to cavities.
Sanjiv Chopra, a professor of medicine at Harvard Medical School and Harvard-affiliated Beth Israel Deaconess Medical Center, has been so impressed he’s become something of a coffee evangelist. The author of several books, Chopra included a chapter on coffee in his 2010 book, “Live Better, Live Longer.”
Chopra first became aware of the potentially powerful protective effects of coffee when a study revealed that consumption lowers levels of liver enzymes and protects the liver against cancer and cirrhosis. He began asking students, residents, and fellows on the liver unit to quiz patients about their coffee habits, finding repeatedly that none of the patients with liver ailments drank coffee.
Chopra himself makes sure to have several cups a day, and encourages others to do the same. Though other researchers are less bold in their dietary recommendations, they’re convinced enough to continue investigations into the benefits.
Alberto Ascherio, a professor of epidemiology and nutrition at the Harvard T.H. Chan School of Public Health and a professor of medicine at HMS, has been studying the potential anti-Parkinson’s effects first suggested in the 2001 findings. That study showed that four or five cups of coffee daily cut disease risk nearly in half compared with little or no caffeine.
Professor of Nutrition and Epidemiology and Professor of Medicine Frank Hu, who leads the diabetes section of the long-running Nurses’ Health Study, has become interested in whether coffee drinking affects total mortality.
“I’m not a huge coffee drinker, two to three cups a day,” Hu said. “[But] I like it and, thinking about the extra benefits, that’s comforting.”
Last year, a Harvard team led by then-research associate Marilyn Cornelis — today an assistant professor at Northwestern University — traced coffee’s fingerprints to the human genome, discovering six new genes related to coffee consumption and reconfirming two others found earlier. The six genes included two related to metabolism, two related to coffee’s psychoactive effects, and two whose exact purpose in coffee consumption is unclear, but which are related to lipid and glucose metabolism.
Daniel Chasman, an associate professor of medicine at HMS and associate geneticist at Harvard-affiliated Brigham and Women’s Hospital, who worked with Cornelis on the study, said caffeine consumption habits are highly heritable and that the genes they found appear to explain about 7 percent of the heritability. That’s a significant amount, he said, considering how strong an influence culture also plays on coffee consumption.
Though the links between coffee and better health have become considerably clearer, what exactly confers the benefit remains murky. Caffeine alone does not explain the effects. For starters, some of the benefits are seen even with decaf, which has prompted researchers to turn their attention to the many other active compounds — including antioxidants such as chlorogenic acid — in your morning cup.
“Coffee is a complex beverage. It’s very difficult to pinpoint which component of coffee is responsible for the benefit,” Hu said. “There are numerous bioactive compounds.”
Other highlights from Harvard research include:
• A 2005 study exploring concerns that too much coffee was bad for blood pressure found no link between higher blood pressure and coffee and found some suggestion that it improved blood pressure.
• Regular coffee drinking was linked in a 2011 Harvard study to lower risk of a deadly form of prostate cancer.
• Also in 2011, a study showed that drinking four or more cups a day lowered the rate of depression among women.
• A 2012 study tied three cups a day to a 20 percent lower risk of basal cell carcinoma.
• A 2013 Harvard study linked coffee consumption to a reduced risk of suicide.
• Also in 2013, a Harvard analysis of 36 studies covering more than a million people found that even heavy coffee consumption did not increase the risk of cardiovascular disease and that three to five cups of coffee daily provided the most protection against cardiovascular disease.
• Also in 2014, Harvard Chan School researchers found that increasing coffee consumption by more than a cup a day over a four-year period reduced type 2 diabetes risk by 11 percent.
• The same study showed that those who decreased their coffee consumption by more than a cup a day increased their type 2 diabetes risk by 17 percent.
“That first cup of coffee in the morning is happiness.” Chopra said. “It’s a real joy.”