Pete Seeger, folk singer and activist for peace, civil rights, labor rights and the environment, left us just two years ago - January 27, 2014. Recently, Seeger's FBI file has been released. Included in the file is Pete's correspondence with Victor Grossman. The Editors of The Volunteer, founded by the Veterans of the Abraham Lincoln Brigade, asked Grossman if he had any recollections of Pete's visit to East Berlin in 1967. Here's his story. 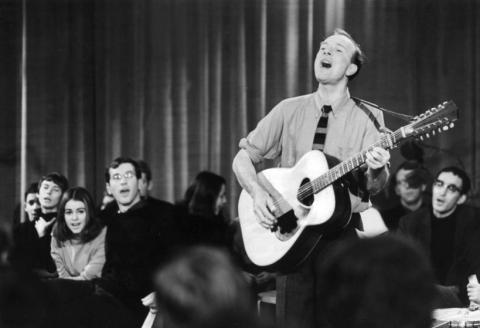 US folk singer Pete Seeger performs at a TV show in East Berlin, GDR, January 3, 1967., Photo by: Zentralbild/picture-alliance/dpa/AP Images // The Volunteer
During Pete's visit I was director of the Paul Robeson Archive of the GDR Academy of Arts (the archive is still in storage here). That brief episode was one of the high points in my life. I was  very happy to get the job as Pete's interpreter in East Berlin; I had been in touch with him because I had conducted two radio series on GDR radio, one on US History in Folk Song, the other titled "Pete Seeger singt" and both of them introducing the GDR public (and some listeners in West Germany) to the music of Pete, Woody, Leadbelly, the Appalachian singers and the new crop of folk singers emerging in the USA in those years, Baez, Ochs, Paxton, Peter, Paul and Mary, then Dylan). He had sent a taped greeting at the end of the one series.
Pete, Toshi and Tinya arrived after a concert in West Berlin (which, as I gather, also went well). The first highlight was a smaller concert for maybe about 100, mostly young people who knew his songs (often through my programs) and so could immediately join in singing We Shall Overcome, Wimoweh, Flowers, Hammer Song, Guantanamera - all of them fresh and new at the time and known only to those interested circles. 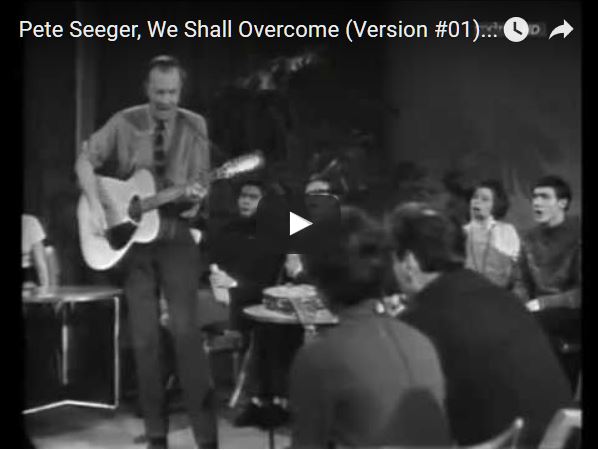 Pete Seeger performs "We Shall Overcome", Berlin, DDR, 1967
The next day he was scheduled for a TV recording, but the director in charge didn't have a clue about him and planned to have him as a sector of a larger Saturday evening pop broadcast. He wanted Pete to stroll down a carpet in a nightclub type setting with potted palms and a skyscraper view out the window - with playback. Pete was unhappy about all this, and when they had technical difficulties and couldn't get started he had me tell the director that he never used playback and didn't like strolling through a nightclub with his banjo - but he had signed a contract for an hour here so he would cooperate but no longer than one hour, so they should hurry and fix their technology. They didn't get it fixed so that was not televised. His concert the night before was, however, for the news - but a very nice, long section. That one hour at the TV studio was the only time I have ever seen him in a bad mood. 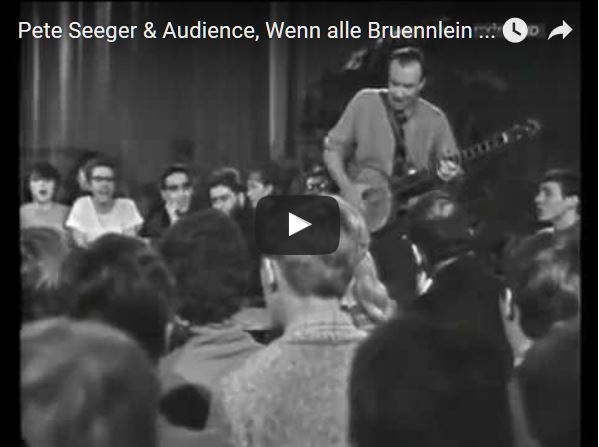 Pete Seeger performs "Wenn alle Bruennlein fliessen", Berlin, DDR, 1967 (with audience participation/harmonies, mentions Martha Schlamme and "Zupfgeigenhansel" songbook as his "sources")
That evening he had his big concert in the biggest theater in East Berlin, the famous Volksb_hne (with a long progressive tradition from before 1900). I think Pete was quite uncertain. He had always avoided Germany until then, and was wondering what an East Berlin audience would be like. I translated what the concert manager said: The big theater was sold out and people were almost engaged in fisticuffs to buy any possible remaining tickets.
At supper before the concert, at his hotel, he suddenly found a very artfully folded napkin on a silver tray at his place, with a note which I translated: Dear Mr. Seeger, I am an admirer of your music. Is there any way to get a ticket for the concert tonight? Then a name and "apprentice waiter".
Pete said, "We must get him in!" The concert manager said, "Impossible! There are no tickets left! We even had to turn down a political bigshot!"  But Pete looked at Toshi and she nodded in answer, and he said, "He'll get in even if he has to carry my banjo in with me at the stage entrance!" And that is exactly what happened. The fellow was able to see and hear everything from the stage wings.
I don't remember all the songs he sang - I guess it was much like his usual program at the time. But quite early he sang and played "Stille die Nacht" after a brief introduction (with me translating his words). There was total, moved silence in the big theater - exactly the right response, of course. He also sang Lisa Kalvelage - how she learned enough from being bombed out in Nuremberg to fight napalm shipments to Vietnam - also a very moving song in Berlin and Germany. And he sang Peat Bog Soldiers, Moorsoldaten - in which the entire audience joined in. In East Berlin this was a song which almost everyone knew - and as his comments indicated, this and the whole evening impressed him very greatly.
I might mention a few other incidents. The Seegers visited the great Ernst Busch, dearly loved in East Germany both for his singing and his magnificent acting in many Brecht plays. It was a meeting between two of the greatest singers, one who had collected so many Civil War songs and made especially those of the Th,lmann Battalion world-famous and the other, who helped make those of the Lincoln Battalion and other Civil War songs equally famous! Unfortunately the language barrier prevented any real chatting, although during the visit Busch connected per phone with Grigori Schneerson in Moscow whom both knew well and this helped bring them closer together. I had the feeling that Pete admired Busch greatly (as I did) while Busch may not have known quite so much about Pete - or American musical developments. But they met-a historical moment!
Pete also wanted to visit the Berlin Ensemble (Brecht's theater - run by his widow). This was a gamble because of the language problem, but they were playing Sean O'Casey's "Purple Dust" which he said he knew, and I recalled that there were funny scenes with farm animals which would make it easier for Tinya (9 or 10?). But she was bored and difficult, and there was so much dialogue that the experiment was not too successful.
In general, I think his visit was extremely successful not only for his very enthusiastic audiences but also for the Seegers - indeed, I think he was quite moved at the response at both concerts! Also at meeting a number of very good people, all devoted anti-fascists!
Before his departure he met with a representative from the Vietnamese Embassy and, if I am not mistaken, he gave either much or all of his fees for the appearances to the people of Vietnam (then very much at war).
And at the airport a group of about six young musicians and singers showed up, with guitars and one with his double-bass, to chat and send him off properly. I think this little parting greeting also made an indelible impression on everyone involved, including me, of course. These were the young people who started up a Hootenanny Club (later renamed Oktober Klub) and set a song movement in the whole GDR in motion, with annual Festivals of Political Song, inviting the best singers from all the world (and the locals) to an annual major event. Pete also sang at such a festival one year (1986 I think) and although I was with him then, too, much of the time (though not as official interpreter) and there are many anecdotes worth telling) that is another story, possibly missed by the FBI. There will be an anniversary get-together of that group, now graybeards, in February, in which I will take part - and perhaps tell this story. (A side note: During one of his two Germany visits Pete made a side trip to Stuttgart to look into his ancestors' story. One ancestor - also a Seeger - had been a schoolmate there of Friedrich Schiller)
I might add that Pete and I exchanged greetings for many years, and occasional slightly longer exchanges. He suggested that I write an article about the controversial Wolf Biermann affair for "Sing Out, which I did. When I was finally able to go to the USA again with my wife we visited the Hudson River festival and met Toshi there, but not Pete.
Read more about Seeger's FBI file in "Pete and the Feds."
[Victor Grossman (born in New York City, 1928) is an American journalist who deserted the US Army in 1952 under McCarthy-era pressure by swimming across the Danube River to the Soviet Zone of Austria. He has lived in East Berlin ever since. His books include a history in German of the Spanish Civil War, Madrid du Wunderbare, and his English-language autobiography, Crossing the River (University of Massachusetts Press).]
Subscribe to Portside