Did you hear all the buzz around Airbnb, the online accommodation service, listing homes in illegal Israeli settlements for people to rent? 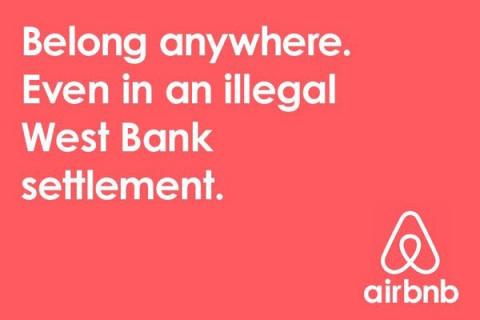 There are 13,000 Airbnb listings in Israel, though investigations have revealed that many of the properties are actually located in settlements built on stolen Palestinian land in the West Bank. By allowing users to list and rent these properties and taking 9-15% from hosts and guests, Airbnb is making money off of Israel’s continued military occupation of Palestinian land and helping facilitate settlement activity.

We are excited to launch this joint campaign with member groups American Muslims for Palestine, CODEPINK: Women for Peace, Jewish Voice for Peace, and US Palestinian Community Network.

This campaign is especially important following yesterday's release of a Human Rights Watch report that called on businesses to stop operating in, financing, servicing, or trading with Israeli settlements in order to comply with their human rights responsibilities.

Airbnb allowing users to list properties as in Israel when they are in fact in the West Bank also helps Israel normalize its control of Palestinian land. The settlers who are renting their properties themselves make this point: Lily, who has lived in the settlement of Efrat for 30 years, insists that her property is “part of Israel” and, “This is our country and we mean to stay.”