Texas is just one of 19 states to receive a failing grade on reproductive health according to a new report from the Population Institute, a nonprofit that provides family planning education. 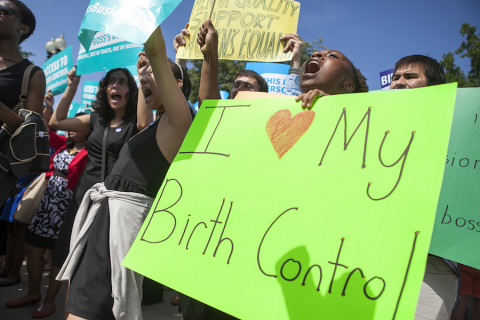 It’s not just Texas where reproductive rights are in danger. As the Supreme Court prepares to weigh in on controversial laws in Texas that would shut down most of the state’s abortion-providing clinics, the Lone Star state’s rollback of reproductive rights has been in the national spotlight. But Texas is just one of 19 states to receive a failing grade on reproductive health according to a new report from the Population Institute, a nonprofit that provides family planning education.

Here’s the map, you can get details on each state in the report: 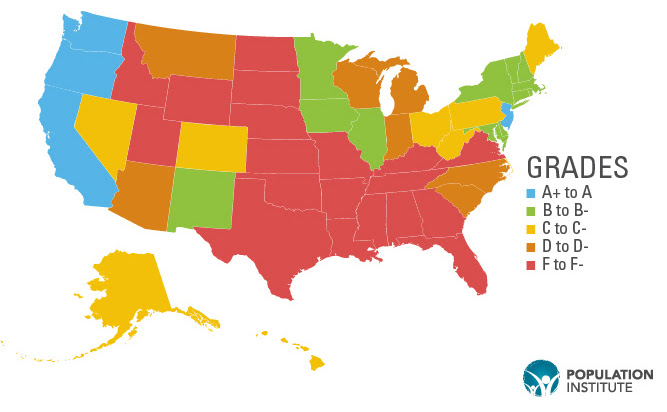 The grades are based on a pretty holistic set of criteria: effectiveness in reducing teen pregnancies and rates of unintended pregnancies, whether comprehensive sex-ed is required in schools, access to emergency contraception, affordability of birth control (which is impacted by states expanding—or refusing to expand—Medicaid), how many people are eligible for family planning coverage, and access to clinics that provide abortions.

The past year has been an especially bad year for reproductive rights in the United States, with Republican politicians specifically taking aim at Planned Parenthood. “There has been an avalanche of legislation—both proposed and enacted—to restrict clinic access and reduce funding for Planned Parenthood and other family planning providers,” says Population Institute president Robert Walker in the new report. While Congress voted eight times to defund the reproductive health provider, states around the country passed laws that made it harder for clinics to operate and for people to get affordable birth control or abortions. A prime example of this kind of local pushback to progressive reproductive health laws is found in Colorado. Since 2009, a private foundation funded a pilot program to provide free long-term birth control (like IUDs) to young women. The program cut unintended pregnancies and abortions in the state by 40 percent and, according to the governor, saved the public money. But when the seed money ran out, Republican legislators blocked the state from funding the free birth control program. Last-minute private grants saved the program for one more year—but after that, thousands of Colorado youth might lose access to birth control, unless they can afford to pay for it out of pocket.

As for the good news, congratulations to residents of California, Washington, Oregon, and New Jersey on having A-quality access to reproductive health. California got an A+ score in part for passing a law making sex education mandatory in school and Oregon got an A+ for passing a law that allows birth control to be sold directly from pharmacies, without requiring a visit to a doctor’s office. Hopefully in 2016, other states follow their lead.