The Algerian regime is unsparing in the tactics used to discourage workers from organising and fighting for their rights, including wilful disregard for the decisions of its justice system. 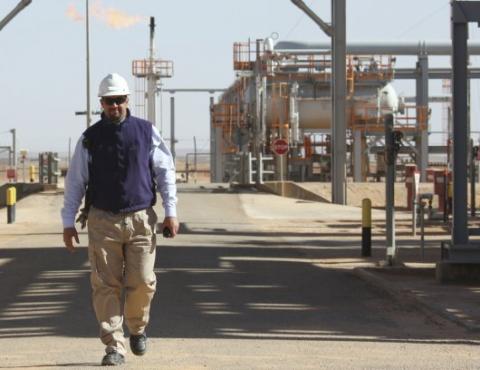 It has been five years since the state of emergency was lifted, yet Algeria is still a long way from establishing a democracy built on respect for individual and collective rights, especially when it comes to the rights and freedoms of workers and trade unions

Workers affiliated to independent trade unions, in other words those not controlled by the regime, face unfair dismissals, intimidation and even imprisonment. It is in light of this situation that Algeria’s civil society and independent trade union organisations have been stepping up their visits to Brussels and other European capitals over recent months.

However, Algerian workers do not always receive the help hoped for outside of their country.

He describes, in an interview with Equal Times, the obstacles and restrictions faced on a day-to-day basis by trade unionists in his country, such as problems registering unions (some have been waiting for ten years), bans on public or private gatherings without the authorisation of the Ministry of the Interior, or police barricades blocking access to private meetings.

The regime is also deploying the more pernicious tactic of cloning. When faced with the inability to dissolve a trade union, the authorities create a “fake” organisation, with the same name as the independent union targeted, grouping workers close to the government. The SNAPAP, its president tell us, has a clone.

“In our case, the government even took our organisation’s clone to the ILO’s International Labour Conference, to argue that all is well and to try and avoid condemnation by the ILO. Fortunately, it didn’t work. It is a tactic simultaneously aimed at dividing the workers and deceiving international opinion,” says Malaoui.

It is a practice international bodies are all too familiar with, and one that has already been condemned by the International Trade Union Confederation (ITUC), the ILO and the annual Human Rights Report of the US Department of State.

The Algerian regime is unsparing in the tactics used to discourage workers from organising and fighting for their rights, including wilful disregard for the decisions of its justice system.

According to the reports of human rights organisations such as EuroMed Rights, which keeps a careful record of the workers’ rights violations in Algeria, 40 trade union activists affiliated to the CGATA have recently been suspended or unfairly dismissed.

Another grievance raised against the Algerian authorities is the labour code “drawn up in secret”, explains Elise Poumay of EuroMed Rights. The ILO has received no response to its request for an explanation.
These practices have given rise to a caution from the ILO, which considers Algeria to be in breach of Convention 87 on Freedom of Association.

The Algerian government hastened to respond by inviting ILO Director-General Guy Ryder, in November 2015, to attend a tripartite meeting. The independent unions were not, however, invited.

To express their discontent, the latter threatened to stage a hunger strike, called off at the last minute thanks to the intervention of the ITUC, to which the CGATA is affiliated.

“The Algerian government is violating its international obligations by preventing the legitimate trade union activities of the CGATA in Algeria as well as by blocking the independent confederation’s activities at international level and at the ILO in particular.

The government must end these violations and allow workers to fully exercise their right to freedom of association,” says Sharan Burrow, general secretary of the ITUC.

The ILO’s Bureau for Workers’ Activities (ACTRAV) is planning a mission to Algeria, as yet to be confirmed, during the course of 2016. Its aim is to discuss the trade union situation with the workers’ representatives in the country.

Ryder’s office said, in a mail to Equal Times: “[…] one of our key missions is, indeed, to promote respect for ILO Conventions. We will, of course, continue to do so, whatever the country, and to ensure they are respected, through the control mechanisms in place within our organisation.”

Algeria’s independent unions are stepping up their visits to Brussels to convince EU institutions to place this issue at the heart of their discussions with the country’s authorities.

An important victory was won for Algerian workers at the European Parliament, where a resolution firmly condemning the imprisonment of human and trade union rights activists was passed in April 2015.

The resolution led to the release of the imprisoned trade unionists, according to Malaoui.

Other European institutions are more reluctant, such as the department in charge of the European Neighbourhood Policy (ENP), denounces EuroMed Rights, which had already criticised the exclusion of human rights questions from the ENP Review in November.

It holds the same position with regard to social and trade union rights. In an interview with Equal Times, Poumay warns: “One of the criticisms voiced by the EU partner countries is their lack of ownership of this policy, in other words, that the EU imposes its interests and ‘gives lessons’”.

“The EU has therefore planned to renegotiate a new agreement, with each country in the neighbourhood, that will define their mutual priorities in terms of cooperation. It is essential, within the framework of these negotiations with Algeria, that the EU ensures human rights and trade union freedoms are at the heart of the agreement.”

“The EU and Algeria have been negotiating an Action Plan within the framework of the ENP since 2012. The chapter on human rights is, precisely, one of the sticking points, and the ENP Review could allow Algeria to secure a cooperation agreement that excludes the human rights and democratic reform dimension.”

Poumay also suggests that the European Economic and Social Committee (EESC) should play a greater role in this area, by publishing a report, for example.

Trade unionists from Algeria will be back in Brussels at the end of January, accompanied by human rights organisations, to prepare for the next EU-Algeria subcommittee meeting on “Political dialogue, human rights and security”, as well as to follow up on the European Parliament resolution and to raise important issues regarding the EU’s relations with Algiers.

This article has been translated from French..