"I left India more convinced than ever before that nonviolent resistance was the most potent weapon available to oppressed people in their struggle for freedom." - "The Autobiography of Martin Luther King Jr.," edited by Clayborne Carson. In this decade - in which more people are using nonviolent resistance than ever before - scholars and practitioners alike would do well to consult the pragmatic and principled wisdom of Gandhi and King in building a way forward. 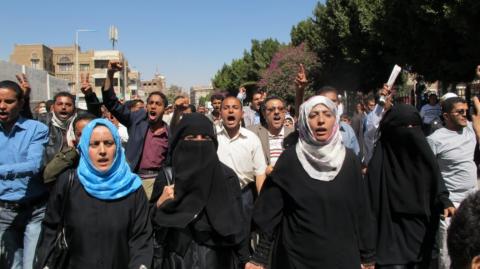 Yemeni activist Tawakkol Karman (right, white scarf) was awarded the Nobel Peace Price for her nonviolent activism for women's rights., credit: Sudarsan Raghavan, Washington Post
Since 2011, the world has been a deeply contentious place. Although armed insurgencies rage across the Middle East, the Sahel and Southern Asia, violent civil conflicts are no longer the primary way that people seek to redress their grievances. Instead, from Tunis to Tahrir Square, from Zuccotti Park to Ferguson, from Burkina Faso to Hong Kong, movements worldwide have drawn on the lessons of Gandhi, King and everyday activists at home and abroad to push for change.
Gandhi's and King's emphases on nonviolent resistance - in which unarmed people use a coordinated set of strikes, protests, boycotts or other actions to confront an opponent - are not without critics. Some critiques are based on a misunderstanding about what civil resistance is, while others doubt the ability of unarmed and suppressed people to organize and challenge a powerful opponent. With each new movement comes the same set of challenges, including questions about the efficacy of nonviolent action in the face of entrenched power and systemic oppression. In 2011, we published a book exploring these questions and found unexpectedly that campaigns of nonviolent resistance had succeeded more than twice as often as their violent counterparts when seeking to remove incumbent national leaders or gain territorial independence.
To many people, this conclusion may seem naive, but when we drilled into the data, we found that nonviolent resistance campaigns don't succeed by melting the hearts of their opponents. Instead, they tend to succeed because nonviolent methods have a greater potential for eliciting mass participation - on average, they elicit about 11 times more participants than the average armed uprising - and because this is the source of major power shifts within the opponent regime. Mass participation that draws on diverse segments of society tends to empower and co-opt reformers while cutting off hard-liners from sources of support. When such participation is nonviolent, it increases the chances of pulling the regime's support from the leadership, allowing security forces, economic elites and civilian bureaucrats to shift their loyalties with less fear of bloody retribution.
In other words, we found that nonviolent resistance is effective not necessarily because of its conversion potential but rather because of its creative, co-optive and coercive potential - a theory that Albert Einstein Institution founder Gene Sharp has articulated for decades. Naturally, not all nonviolent campaigns succeed. But in cases where they failed, there was no good systematic evidence to suggest that violent uprisings would have performed any better.
That was 2011. Now it's 2016. What have we learned about nonviolent resistance in the past five years? Below we sketch some of the key empirical takeaways from political science, some of which have rather surprising implications for skeptics of nonviolent action.
1.  Nonviolent campaigns have become increasingly common.
If you feel as though we live in a particularly disruptive time in history, you're right. But it's the kind of disruption that is unique to our time. The Major Episodes of Contention project (a data project run by Professor Erica Chenoweth at the University of Denver) suggests that nonviolent resistance campaigns have become the modal category of contentious action worldwide. The NAVCO Data Project, a separate data collection project using different source material and inclusion criteria, shows similar patterns, as do a variety of other protest data sets. Whereas the frequency of violent insurgencies - defined with a 1,000-battle death threshold - has declined since the 1970s, campaigns relying primarily on nonviolent resistance have skyrocketed. Note that these figures refer specifically to maximalist campaigns, meaning their goals are to remove the incumbent national leadership from power or to create territorial independence through secession or expulsion of a foreign military occupation or colonial power. 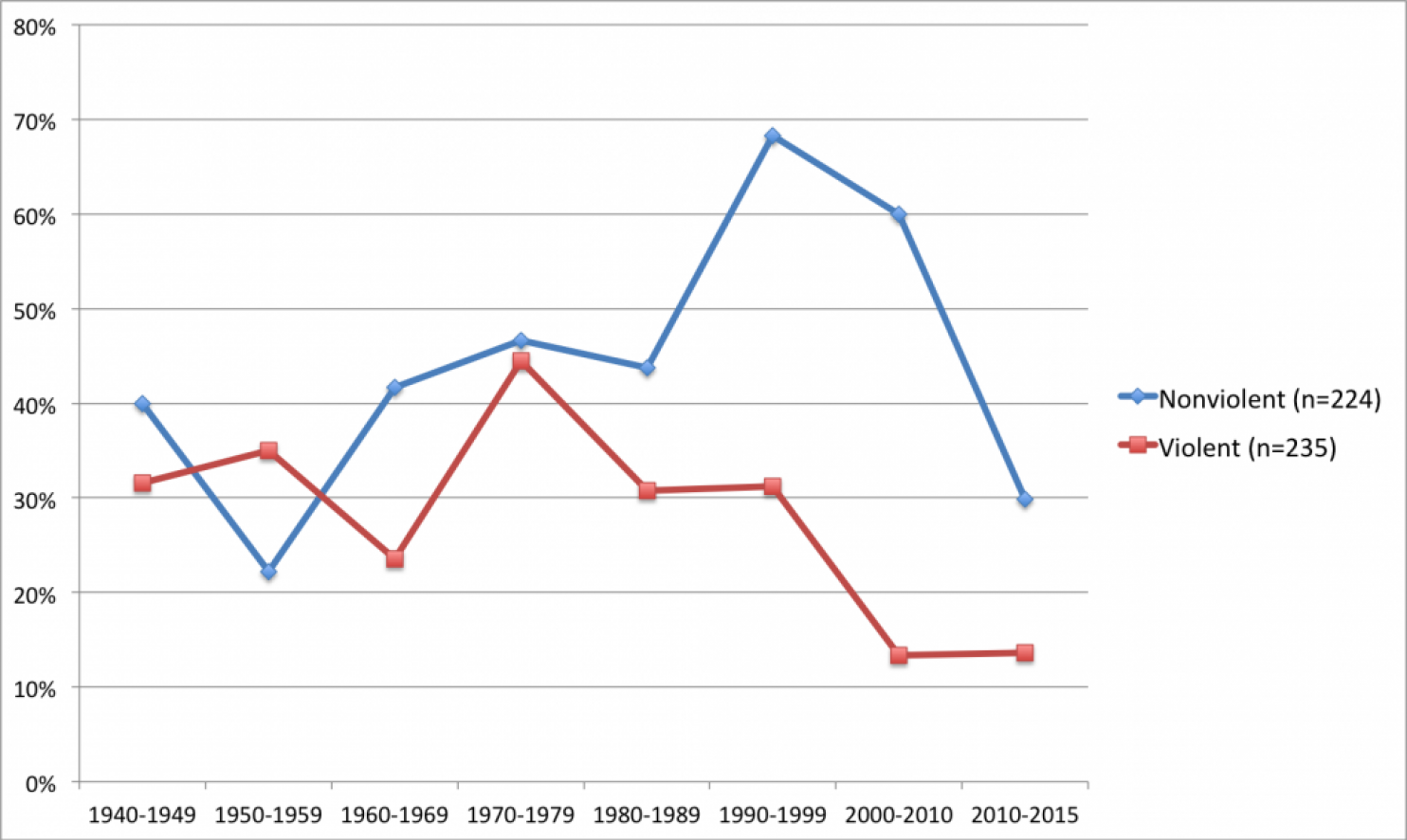