labor We Need A Strong Trade Union In Every Workplace

Unions are the most effective force for social equality, writes British Labour Party leader Jeremy Corbyn. He recalled that Keir Hardie -- who 120 years ago became the first unionist to enter Parliament -- didn’t just fight for workers, he fought for universal suffrage, a universal pension, free education for children, decent homes for all, against powerful monopolies and for peace. 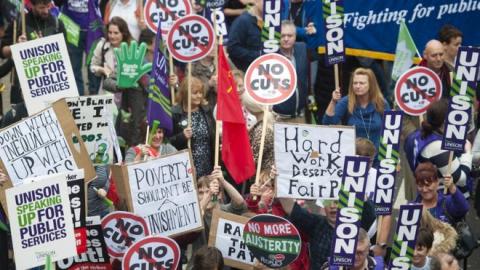 Unions have said they will fight the government “tooth and nail”,

Before being elected to Parliament I worked as a trade union official, with garment workers who were owed back pay by unscrupulous employers.

Later I worked with public-sector workers fighting to protect their jobs and services and low-paid women fighting for equal pay.

And I know how much harder it is now today for the trade union movement — with the most restrictive anti-union laws in Europe, which are about to get even more restrictive.

As leader I am proud of the link between trade unions and the Labour Party — it is not just a historic link, it’s what makes Labour succeed.

We win when we’re in touch with the needs and the concerns of millions of working people and their families — the people trade unions represent.

Too often in the past Labour has been cowed into acting like it is ashamed of our relationship with trade unions.

Well, I’m proud of it. Proud to be a party funded in large part by the cleanest money in politics — democratically voted on by thousands of ordinary workers.

Proud of being connected to the largest democratic organisations in this country, with over six million members, and proud that the Fire Brigades Union has recently voted to reaffiliate to Labour.

Labour has a mountain to climb to win in 2020 and tough elections this May. To succeed we have to become a social movement again — campaigning together in every community for our shared goals.

Labour membership has doubled since the general election defeat, and many of these new members are trade unionists. Nearly 400,000-strong, Labour can reach parts of our country and our communities that no other party can.
Trade unions don’t just organise in the workplace, we organise in our communities too. The labour movement is a social movement.

At the last election the 34 per cent of the electorate who didn’t vote at all should have been Labour voters, but we didn’t reach them and didn’t inspire them.

The more we sit in our Westminster bunker, the weaker we are. The more we involve our members and supporters and affiliates, the stronger we will be. So to win Labour must draw on its greatest strength: its people.

More public-sector workers are now having to claim working tax credits and housing benefit just to make ends meet. What sort of example is government setting when so many in its own workforce are paid so little they need to claim benefits?

But the Tory government’s solution was not to abandon the public-sector pay cap but to cut tax credits.

Strong Labour opposition and campaigning by trade unions and others stopped those cuts which would have seen three million families lose over £1,000 this April. But we have recently learned that 800,000 families will still see a cut in April.

But the best guarantee of decent pay is a strong trade union in every workplace — and some of the worst examples of low pay and job insecurity are to be found in the private sector, where trade union membership is just 14 per cent.

British company profitability is at record levels. But without unions, any increase in returns only gets shared in the boardrooms and between shareholders.

This is a global issue, with capital trying to force down wages and employment rights across the globe. That is why Labour is making the case for a real social Europe as part of the referendum campaign, and our MEPs are opposing any dilution of employment rights in TTIP negotiations.

Trade unions are the most effective force for equality in the workplace. The evidence is clear both in Britain and across the developed world — greater pay equality correlates with higher trade union membership.

It is for precisely that reason that the Tories are attacking trade unionists, trade unions and the Labour-trade union link.

Labour MPs and peers are opposing the Trade Union Bill in Parliament, because we know it is a cynical attempt to weaken opposition to the Tories’ austerity agenda: cut, run down and privatise.

We have made it clear: a Labour government in 2020 will strengthen employment and trade union rights.

When Labour leader John Smith addressed the TUC in 1993 he set out a Charter for Employment Rights to “give all working people basic rights that will come into force from the first day of their employment. We will give the same legal rights to every worker, part-time or full-time, temporary or permanent.

That vision is being brought back into the heart of Labour. Our shadow minister for trade unions and civil society Ian Lavery MP, a former NUM [National Union of Miners] president, is starting work on a new commission into workplace rights for 2020.

We will want your input and engagement in that process, launching later this year.

In the here and now, Labour will campaign for a public inquiry to ensure that the scourge of blacklisting is never repeated, and to ensure all the government papers are published relating to the miners’ strike, including Orgreave, and to the Shrewsbury 24 pickets.

When 120 years ago a former trade unionist first entered Parliament to fight injustice, Keir Hardie didn’t just fight for workers, he fought for universal suffrage, a universal pension, free education for children, decent homes for all, against powerful monopolies and for peace.

We must oppose privatisation, build council housing, and never let ourselves be divided: workers against the unemployed; British workers against migrant workers; young versus old.

Our strength is unity. The Labour Party took off over a century ago when the existence of trade unions was under threat. Unions are too much of a force for a good, a force for equality, to allow the Tories to put that at risk.

We will only have a strong trade unions if we get a Labour government in 2020. If we work together, we can achieve that and many campaigning victories along the way.

Jeremy Corbyn is leader of the Labour Party.