Many US producers borrowed heavily and cheaply to cash in on the shale boom, but prices of around $30 a barrel are now causing severe difficulties. 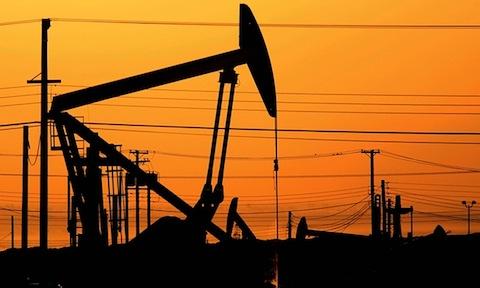 Pump jacks at a shale formation in California: producers are counting the cost as revenue tumbles., David McNew/Getty Images

Low oil and gas prices are close to triggering a wave of bankruptcies and debt defaults among US producers, investors fear. The fall in the oil price to levels that are punishingly low for producers is putting up to $88bn of borrowings potentially at risk.

About 30% of the oil and gas industry’s debt is now said to be at distressed levels – meaning companies are experiencing financial or operational problems severe enough to put them at risk of default or bankruptcy.

Producers, especially those fracking for shale gas, have borrowed heavily in the past few years and are now counting the cost as revenues tumble. From around $115 a barrel in July 2014, oil is now hovering nearer $30 a barrel, with fears of a continuing glut. This comes after a shale gas boom in the US coincided with low interest rates in the wake of the financial crisis.

“We effectively had free credit for seven years and an energy transformation, so a lot of capital went into that,” said Leslie Biddle of Serengeti Asset Management, a $1.5bn US hedge fund with significant oil and gas investments. “But now the capital markets to exploration and production have shut.”

Companies on the distressed list are paying interest at 10 percentage points more than Treasury rates. Standard & Poor’s (S&P) says the energy sector accounts for around 31% of the $285bn total distressed debt in the US. Some investors are attracted by the high yields on offer and a belief that the oil price of oil will soon rise. Borrowers, meanwhile, are keen to fund investment by issuing bonds in the hope the price of oil will eventually rise again.

But sentiment in the sector is worsening the longer the oil price stays low. Many traders had expected an upswing this year, but it has failed to materialise.

In the US, 35 exploration and production companies filed for bankruptcy between July 2014 and December 2015, according to a recent Deloitte report.

Robert Friend of California-based investment group Pacific Alternative Asset Management said: “There are going to be big bankruptcies in exploration and production. And it will spread to other industries, especially those that serve the sector.”

Debt traders refer to specific “events” that can shock the market. Early this month US shale producer Chesapeake Energy, in which investor Carl Icahn has a large stake, had to state that it had “no plans to pursue bankruptcy” after its shares collapsed. As traders feared the group could fail under $10bn of bond debt, its shares halved in a day amid rumours that it had appointed restructuring specialists, a move it denied.

Chesapeake is one of the biggest US shale gas drillers, but last summer it announced a series of cutbacks as the price of natural gas fell. Some investors think it would be a good thing if it did file for bankruptcy.

Biddle said: “Having Chesapeake file would be decently cathartic. When you get to a filing and go through the process you get new investors who bring in new capital.”

Earlier this month, S&P warned that the company’s debt was “unsustainable”.

Other energy companies on the distressed list include Denbury Resources, Linn Energy and Transocean, one of the world’s largest offshore drilling contractors, whose debt was downgraded to junk status a year ago.

Despite the low oil price, there have been no large-scale energy bankruptcies since the demise of Energy Future Holdings, the former Texas-based TXU, in April 2014. Since the beginning of the year, the global default tally of US bond issuers has risen to 19, from 13 at the same time last year, according to S&P. The credit rating agency says the oil and gas sector accounts for 29.6% of the companies in its distressed category.

The oil giants themselves are not immune to debt downgrades, which can raise their borrowing costs. S&P cut Royal Dutch Shell’s credit rating at the beginning of the month, and warned of a “significant likelihood” it would cut the ratings of several other European oil majors.

S&P said the move did not take into account the effects of Shell’s £36bn tie-up with BG Group. It plans to assess the rating of the combined entity by the end of June.

Alex Griaznov of S&P said the major energy groups would be able to maintain their investment-grade status: “They have scale, scope, a diversification of operations and an ability to address market conditions with reductions in capital expenditures and operating costs.”