Despite the vaccine’s proven effectiveness, immunization rates remain low — about 40 percent of girls and 20 percent of boys between the ages of 13 and 17 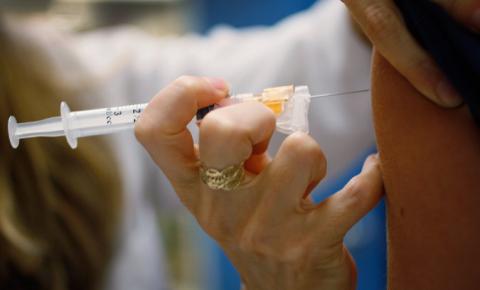 The vaccine for human papillomavirus, a cause of cervical cancer, has proved effective, but immunization rates remain low., Joe Raedle/Getty Images

A vaccine introduced a decade ago to combat the sexually transmitted virus that causes cervical cancer has already reduced the virus’s prevalence in teenage girls by almost two-thirds, federal researchers said Monday.

Even for women in their early 20s, a group with lower vaccination rates, the most dangerous strains of human papillomavirus, or HPV, have still been reduced by more than a third.

“We’re seeing the impact of the vaccine as it marches down the line for age groups, and that’s incredibly exciting,” said Dr. Amy B. Middleman, the chief of adolescent medicine at the University of Oklahoma Health Sciences Center, who was not involved in the study. “A minority of females in this country have been immunized, but we’re seeing a public health impact that is quite expansive.”

The news is likely to serve as a welcome energizer in the tumultuous struggle to encourage HPV vaccination in the United States. Despite the vaccine’s proven effectiveness, immunization rates remain low — about 40 percent of girls and 20 percent of boys between the ages of 13 and 17. That is partly because of the implicit association of the vaccine with adolescent sexual activity, rather than with its explicit purpose: cancer prevention. Only Virginia, Rhode Island and the District of Columbia require the HPV vaccine.

Recent efforts have focused on recommending the vaccine for children ages 11 and 12, when their immune response is more robust than that of teenagers and when most states require two other vaccines — one for tetanus, diphtheria and pertussis, and the other for meningococcal disease. The immunization rates for those vaccines are 80 percent and higher.

The latest research, published in Pediatrics, examined HPV immunization and infection rates through 2012, but just in girls. The recommendation to vaccinate boys became widespread only in 2011; they will be included in subsequent studies.

Using data from a survey by the Centers for Disease Control and Prevention, the study examined the prevalence of the virus in women and girls of different age groups during the pre-vaccine years of 2003 through 2006. (The vaccine was recommended for girls later in 2006.) Researchers then looked at the prevalence in the same age groups between 2009 and 2012.

By those later years, the prevalence of the four strains of HPV covered by the vaccine had decreased by 64 percent in girls ages 14 to 19. Among women ages 20 to 24, the prevalence of those strains had declined 34 percent. The rates of HPV in women 25 and older had not fallen.

“The vaccine is more effective than we thought,” said Debbie Saslow, a public health expert in HPV vaccination and cervical cancer at the American Cancer Society. As vaccinated teenagers become sexually active, they are not spreading the virus, so “they also protect the people who haven’t been vaccinated,” she said.

There are several obstacles to greater coverage rates in the United States. In other countries, the vaccine is often given in two doses, particularly to girls younger than 15. In the United States, it is given in three doses. An immunization advisory committee to the C.D.C. will convene this week to learn more about the efficacy of the lower dose.

And in some countries, the vaccine is either mandatory or at least offered at school, its cost covered by a national health care system, making administration more streamlined and comprehensive. Such measures helped Rwanda achieve a 93 percent immunization rate in girls. Australia, where the vaccine is offered free to schoolgirls, accomplished a 92 percent reduction in genital warts in women under 21, a study showed.

But in the United States, the vaccine is largely optional.

“Multiple studies have shown the importance of a strong provider recommendation for increasing vaccination coverage,” said Dr. Lauri E. Markowitz, a medical epidemiologist at the National Center for Immunizations and Respiratory Diseases, a division of the C.D.C., who led the research for the latest study.

But studies show that many primary care providers either do not recommend the vaccine to parents and patients or do so halfheartedly. Some doctors are reluctant to discuss the vaccine because the conversation may dance uncomfortably around sexual activity. They may want to use their limited appointment time for health topics that parents may be more willing to engage.

To try to shift focus to the vaccine’s purpose, last month dozens of cancer centers endorsed the HPV vaccine as a safe, effective prevention strategy against types of cancer that result in 27,000 cases a year. The latest HPV vaccine protects against nine strains of the virus.

Many doctors are pressing for primary care providers to strongly recommend the HPV vaccine in tandem with the other two that preteen children now typically receive.

“The infection is sexually transmitted, but that doesn’t need to be part of the conversation,” said Dr. Joseph A. Bocchini Jr., a pediatric infectious disease specialist at Louisiana State University in Shreveport.

“If a parent is concerned, physicians should be prepared to talk about it,” said Dr. Bocchini, a former chairman of an HPV vaccine working group for the committee that advises the C.D.C. on immunizations. “But we don’t really discuss how people become infected with every vaccine-preventable disease.”