labor Frequency, Size of Labor Disputes Up In 2015 For First Time In Years

It was the first year since 2011 that saw the number of major work stoppages increased in the US. 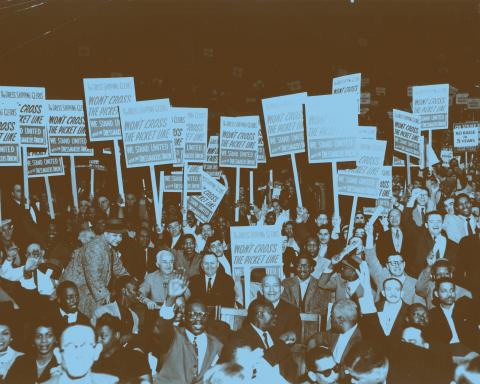 ,
Industrial unrest in the United States was more frequent and widespread last year, according to annual data released Wednesday by the Bureau of Labor Statistics.
There were twelve “major work stoppages” measured by BLS, up from eleven the year before. The disputes involved about 47,000 workers—a year-over-year increase of 13,000.
It was the first year since 2011 that saw the number of major work stoppages increased in the US, and the first year since 2012 to see the number of workers involved in industrial disputes go up.
The number of days lost to disagreements between management and unionized labor was also up by almost 400 percent. In 2015, 740,000 workdays were lost to strikes or lockouts–up from 200,000 in 2014.
The increase in idle days can be attributed mostly to two disputes involving the United Steelworkers Union (USW). A four-month strike by USW against Shell Oil saw all days lost to contract fights increase by 322,100. A lockout involving USW and the Pittsburgh-based steel manufacturer Allegheny Technologies accounted for 206,800 days idle. It started in August and is still ongoing.
BLS defines major work stoppages as “both worker-initiated strikes and employer-initiated lockouts that involve 1,000 workers or more.” They need to last at least one shift to be counted by the Labor Department statistical arm.
Since BLS started collecting the data in 1947, the frequency and size of major work stoppages peaked in 1952, when 2.7 million workers participated in 470 industrial disputes. The United States population then was less than half of what it was in 2015.
[Since 2010, Sam Knight's work has appeared in Truthout, Washington Monthly, Salon, Mondoweiss, Alternet, In These Times, The Reykjavik Grapevine and The Nation. In 2012, he worked as a producer for The Alyona Show on RT. He has written extensively about political movements that emerged in Iceland after the 2008 financial collapse, and is currently working on a book about the subject.]
Subscribe to Portside