This Campus Building Is Named After the First Klan Grand Wizard. Can These Students Change It?

This campus building at Middle Tennessee State University is named after Nathan Bedford Forrest, the first Grand Wizard of the Ku Klux Klan. These students are demanding that the name be changed. Can they make it happen? 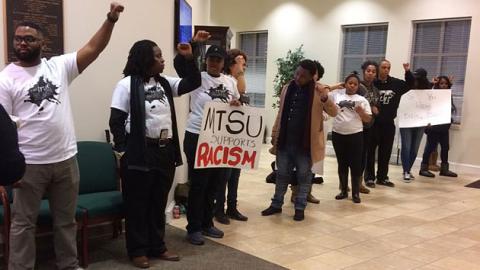 Black student activists at Middle Tennessee State University in Murfreesboro, Tennessee, are demanding a name change for Forrest Hall, the ROTC building that is named for a Confederate general and the Ku Klux Klan's first grand wizard, Nathan Bedford Forrest.

The students issued a statement to the university's president, Sidney McPhee, in advance of a public forum on the proposed name change that took place Wednesday night. "We fundamentally believe that MTSU will not and cannot move forward from its legacy of white supremacy until it removes all its symbols of white supremacy," the letter states.

Demands for the name change have intensified in the aftermath of the massacre at an African American church in Charleston, South Carolina, last June, as more and more Confederate symbols in the South are being removed from public spaces.

The Wednesday meeting was the second of two public comment sessions to debate the potential change. Students reportedly walked out of the meeting, chanting, "Change the damn name," and holding signs in protest. According to a report in the local newspaper, the Daily News Journal, some are suggesting the building should be renamed to Veterans Hall, to honor those who have served in the military.

"Veterans Hall would be a nice thing to name it, but you've got to think about the root cause of changing the name—political correctness," Pat Godwin, who defended the original name, told the Daily News Journal.

The committee, composed of faculty, alumni, and students, is slated to make a recommendation to the Tennessee Board of Regents on the potential change in April.

Becca Andrews is an editorial fellow at Mother Jones. Before moving to the Bay Area to attend UC-Berkeley’s Graduate School of Journalism, she worked for newspapers in the Nashville area. Follow her at @kbeccaandrews or email her at bandrews@motherjones.com. RSS | TWITTER

If you like this article, you can donate to support Mother Jones' independent journalism here.