Isabelle Lopez, her husband and their dog live in a tiny room, perhaps 130 square feet, in the impoverished Lacy neighborhood in the Orange County city of Santa Ana. The room has cardboard walls, which Lopez’s husband painted white to provide at least an illusion they were solid. On those walls, she has tacked family photos and a large reproduction of a painting titled Angel de la Guarda, surrounded by cutout paper butterflies. 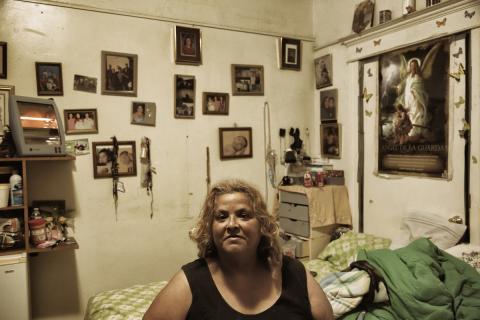 The dank, fetid-smelling room is infested with bugs, mice and cockroaches. It is also crowded – dominated by the couple’s bed, at the foot of which sits a tiny fridge and two little shelves for non-perishable food, a case of bottled water on the floor, a large set of shelves containing bric-a-brac, DVDs and a television. A blanket hangs in place of a door leading out to the hallway, where another family, including children, lives on old cots. “This is my castle,” she laughs bitterly. “I got my kitchen, my living room, my dining room, my guest room.”Isabelle, disabled, mentally ill and surviving on disability checks, lives in an old, green-painted wooden two-bedroom house that has been illegally subdivided to enable roughly 20 people to live there.

Many of the residents (though not Isabelle) are undocumented and afraid to protest their living conditions because they fear that they will be evicted or brought to the attention of immigration authorities. It’s a reasonable concern since, they say, their landlord has told them they will be reported if they “snitch” about their abysmal living conditions. They are part of a huge pool of undocumenteds  (69 percent of all undocumented residents in the state) — who are classified as “burdened renters” — paying more than 30 percent of their income on rent. Ineligible for federally funded Section 8 vouchers or for housing in subsidized units developed with federal dollars, they are, says local councilwoman Michele Martinez, easy prey for slum landlords. “It’s a major problem,” Martinez acknowledges. “We have a huge undocumented population.”

All of the residents in the green house share one bathroom whose walls and floor are covered in mold, with a shower so small that Isabelle, a large lady, can’t bend down to clean her feet. Oftentimes she can’t even get into the bathroom, because so many people are waiting in line to use it. She showers every four or five days, and often uses a commode in her bedroom in place of the toilet. She also frequently is hospitalized with lung problems that are quite possibly exacerbated by the mold.

According to a 2014 Los Angeles Times report, more than half of the top one percent of most crowded census tracts in the U.S. are in the city of Los Angeles and in Orange County. When Santa Ana’s authorities surveyed renters for the Housing Element report, they found 43 percent reported living in overcrowded housing.

The Housing Authority has no public housing of its own – a result of the 1980s mania for privatizing public housing. It also has a deeply inadequate supply of Section 8 vouchers. Strapped for cash by federal cuts to housing assistance, the city currently only provides 2,700 tenant-based housing vouchers and has a wait list that took eight years to run through before it was recently opened up again. In 2015, when the Housing Authority briefly reopened the list for the month of July, 16,375 people applied. Overwhelmed, the city once again shut down the wait list. Orange County as a whole has nearly 50,000 people awaiting Section 8 vouchers.

Moreover, explains Santa Ana’s Community Development Agency’s housing division manager, Judson Brown, because the vouchers will only pay up to a certain amount, they tend to be inadequate to cover market rents in Orange County’s soaring real estate market; making matters worse, many landlords avoid renting to voucher recipients, because if they do rent to them they are subjected to a more rigorous inspection regimen for housing code violations than are landlords who refuse these tenants. And because there is a use-it-or-lose-it practice with these vouchers (if recipients don’t find apartments and start drawing on the vouchers within a specified period of time they lose the benefit), only about one in three families who receives these coveted vouchers ever actually manages to sign leases on apartments.

Brown has heard of one octogenarian woman who looked at 61 housing units; not one of them was willing to rent to her at an amount her $890 voucher would let her afford. In a tight rental market, it’s easier to rent to people who can pay cash, don’t know their rights, and won’t report landlords for housing code violations.

Santa Ana also has assertive developers who have very effectively pushed back against the city’s Inclusionary Housing Ordinance – which once mandated that 15 percent of units in new developments be set aside for affordable housing, but which has been diluted over the past couple of years. It’s got to the point where the ordinance is now a toothless tiger that allows developers to pay fees in lieu of building affordable units and to create all sorts of exemptions to the ordinance. What affordable housing is built uses low-income housing tax credits issued by the federal government to nonprofits, which can pass them along to developers looking to reduce their tax burden in exchange for the developers helping to build a number of affordable housing units. However, the resulting housing is mostly tailored to the lower-middle class rather than the poor.

Many units require that renters earn 50 percent of an area’s median income – which in a well-to-do region such as Orange County puts such housing out of reach of day laborers, construction workers, gardeners and many of the other jobs largely filled by Santa Ana’s immigrant population.

In fact, of the 16 housing developments currently in the pipeline in Santa Ana, only two will be affordable to low-income residents – and yet surveys of renters in the city have found that roughly 60 percent of them are low-income.

To adequately meet the demand for low-income housing, Judson Brown estimates that his city would need to build 1,200 units for the homeless and at least another 5,000 for its low-income renters. The city would also have to receive, he calculates, $64 million a year more from the federal government for affordable housing and $14.4 million to house its homeless. Michele Martinez believes the figure is even higher, ranging up towards a total of $100 million. In reality, however, only a couple of hundred affordable housing units are in the pipeline – filling, Martinez says with an unhappy laugh, barely one-thirtieth of the need.

Isabelle Lopez receives $849 per month in disability payments and hands over $550 of that to her landlord. It’s far more than she would pay for well-maintained, quality affordable housing – where tenants pay only one third of their total income in rent – or for public housing; it’s more than she would pay for an apartment were she on Section 8, which subsidizes market rents for low-income renters. But so far she has spent patient decades just to get on the city’s waiting list; and, now that she is finally on it, might well wait years more to get a place. At roughly $4 per square foot, her slum home costs her more than renters pay per square foot in many desirable neighborhoods of Manhattan.

Around the corner, Amalia Orantes, her husband and four of their adult children, all share a small two-bedroom apartment, paid for from the earnings of two of her children — 24-year-old Jose and 22-year-old Eunice, both of whom get non-benefitted work through temp agencies, assembling medical equipment.

Until the 2008-9 housing crisis, the couple owned a house. When both lost their jobs, he in construction and she for a company manufacturing bulletproof vests, they couldn’t make home payments and sold off their cars and went through their savings trying to keep their home. When that ran out, they missed mortgage payments. A company scammed them into parting with $3,000 to help them renegotiate their loan. But the loan wasn’t renegotiated and the Orantes ended up homeless. Eventually, with the kids finding low-wage work, the family came up with just enough money to rent the slum apartment they are all now crammed into.

From the outside, the Orantes’ apartment complex looks fairly well-to-do – as do many low-income complexes in Southern California — the walls cream-colored adobe, the grounds adorned by palm trees. Inside, however, is a different story. Amalia’s bedroom is so damp, a line of mold runs along the line where the ceiling meets the walls. When it rains, water drips from the damp ceiling onto her and her husband’s heads.

Some days, maggots crawl out of the electricity outlets. The floor in the bathroom sags with rot. And on hot days, red ants and bees swarm into the apartment. One of her sons, the teenage Gerzon, is so allergic to the mold that he is permanently on an array of medications and nasal inhalers. Amalia’s daughter Araceli now lives in a nearby apartment and works during the day. Her toddler daughter is looked after by Amalia, but has mold-triggered rashes all over her little legs. Amalia herself continually gets sick, coming down with lung ailments and colds. She shivers as we talk in the dank apartment, sniffles and hugs her upper body.

“It’s not impossible to leave this place,” says Jose. “But there are a lot of obstacles out there. It’s pretty hard.” His sister, Eunice, is less optimistic. “I feel like it’s impossible. I work, I go to school. I work a lot. But the money – I don’t get to see it. Because it goes on bills. I can’t really save money.”

Another family whom I meet, the parents undocumented, live in a two-bedroom apartment that they rent at $1,300 a month. They can’t afford that on the father’s earnings from construction work and the mother’s jobs cleaning houses and waitressing at a local Denny’s. Their combined incomes place them well above the federally defined poverty line, but, in reality, well below the level needed to meet average rents in a market such as Orange County’s. So the two adults and two children all live in one room, and they rent out the second bedroom, on a monthly basis, to a parade of strangers.

Yet another family of five, mixed status – the mother undocumented, the father documented, the children citizens — lives in a tiny room in a house rented by the woman’s mother. The woman and her daughter sleep in a double bed; next to the bed is a bunk, on top of which sleeps the husband, and on the bottom the two sons.

Recently, Isabelle Lopez’s 8-year-old grandson came to visit her in her cardboard-walled room. She recalls his arrival: “He said, ‘How come you’re poor? How come you can’t be like other grandmas and have a house?’ I got so sad. The rest of my grandchildren don’t want to come over because [their school friends] make fun of them, because of where I live. Society these days says, ‘You’re poor because you want to be poor, you’re lazy, you don’t want to do nothing for yourselves.’ That’s what they think.”