The students marched through downtown Boston after walking out of class to protest planned budget cuts, carrying signs and chanting, "What do we want? Education!," as shoppers and onlookers walking down Newbury Street pulled out their cell phones to record the demonstration. 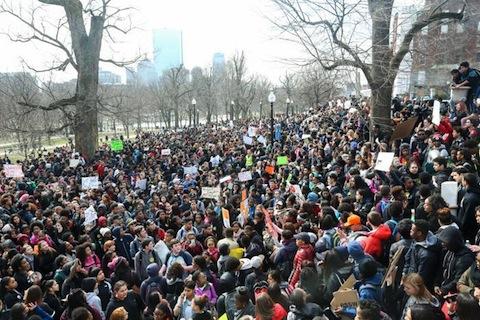 Daphne Partridge spent Monday morning debating whether to walk out of her class at Boston Teachers Union School. The blond sixth grader worried she might be suspended for abruptly standing up and leaving, but, more than that, she worried about what would happen if she didn’t walk out.

As she stood cheering and shouting on the Common with more than 2,000 other students from across the school system, Partridge knew she’d made the right choice.

“At our school we’re worried about language programs being taken away, but now that we’re here we see the ways all the other schools are affected,” she said. “It’s crazy how many kids are here. But it makes me feel like I have a voice.”

The students marched through downtown Boston after walking out of class to protest planned budget cuts, carrying signs and chanting, “What do we want? Education!,” as shoppers and onlookers walking down Newbury Street pulled out their cell phones to record the demonstration.

Students made their way in large throngs toward Boston Common, the State House, and Faneuil Hall, on foot and by bus, despite warnings from the school district that they would be marked absent if they left class.

“Pretty much every student in my class walked out. I don’t think there’s anyone left,” said Harry Saunders, a senior at Snowden International School. “But I’m surprised how many people are here.”

Protest organizers posted a letter on Twitter prior to the walkout stating that budget cuts next year will prohibit students from learning “at full capacity” and “make it impossible to get into the college of your dreams.”

The city’s public schools are facing the deficit due to rising expenses and a decline in state and federal aid. The exact amount of the deficit, however, has yet to be determined. The initial budget shortfall was estimated at about $50 million, though the mayor’s office has said the total figure will be lower when the school committee votes on the final budget March 23.

This isn’t the first public protest regarding the budget cuts. During February vacation week, several hundred parents, teachers, and students held a rally in downtown Boston. Many parents also protested outside of Mayor Marty Walsh’s “State of the City” address in January. But this was the first student-organized demonstration.

City Councilor Tito Jackson marched with the students, and encouraged them to walk inside the State House to voice their opinions.

“I’m so encouraged by the massive turnout and voices of our young people,” he said. “They should be holding lawmakers accountable. They should demand that they have enough teachers who will encourage them to stay in their classrooms. They shouldn’t lose their JV programs, which keep some kids involved and are a lifeline for them. And they shouldn’t lose funding to charter schools.”

Jackson abruptly broke away from the rally to go address two students who were fighting on the Common. After the tussle, the crowd diminished, but several hundred students marched to Faneuil Hall, where Walsh and Gov. Charlie Baker held a press conference for a “Forbes Under 30” event.

Once the students realized Baker and Walsh were no longer inside, they slowly began to walk away. Some students went back to the State House, where they testified before the Joint Committee on Education regarding funding.

About two dozen students remained in front of Faneuil Hall, including Nathan Metz-Lerman, a junior at Boston Latin Academy.

“We have to continue fighting,” he said into a megaphone. “We’re not just gonna let our education be destroyed. Who wants to do a chant?”

“Fight back,” the crowd answered.

Then, as more students dispersed to go home to do homework, Metz-Lerman led the crowd in one last cheer.