Workers of the Chinese Daily News just won a $7.8 million settlement against the company for wage theft and work place violations. The settlement also includes funds to support legal clinics for workers to obtain information about their labor rights. This is one of the largest wage justice settlements in Asian American labor history. APALA, Asian Pacific American Labor Alliance, supported the workers of the Chinese Daily News for years. 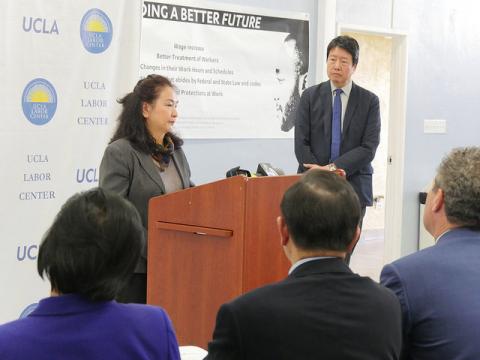 After more than a decade of hard fought litigation, more than 200 employees of the Chinese Daily News obtained a $7.8 million settlement against one of the leading Chinese language newspapers in the country.  This class action victory represents one of the largest wage justice settlements in Asian American history.

Chinese Daily News workers routinely were subject to unfair labor practices including violations of wage laws.  In response, journalists and other workers of the Chinese Daily News began a union organizing campaign which generated national and international support.  Two journalists were fired for their union activities.

According to John Logan in his paper The Long, Slow Death of Workplace Democracy at the Chinese Dialy News, the Chinese Daily News union organizing campaign could well serve as a poster child for the dysfunctional nature and increasing irrelevance of the NLRB elections as well as the role of such rabid anti-union "consultants" such as Burke Group . Employers intent on resisting unionization have little to fear from a system that offers such weak protection for the right to organize and such great opportunities for delay and belligerence. However, another striking feature of the no-holds-barred campaign at Monterrey Park was its contrast with simultaneous organizing drives at the newspaper’s New York and San Francisco offices. At both locations, local management ran what is perhaps best described as an ordinary, run-of-the-mill, aggressive anti-union campaign. Management hired a law firm to oppose unionization, but it did not recruit the services of anti-union consultants and the outcomes were different from that of the Monterrey Park campaign. In significantly less acrimonious campaigns at New York and San Francisco, employees voted for union representation and the company recognized the election result.

The long road of litigation included two trials and multiple appeals.  The trials resulted in favorable decisions for the workers who obtained more than $5 million in damages for unpaid wages and penalties. The groundbreaking settlement includes cy pres awards to fund clinics dedicated to serving workers in the Asian American community in the San Gabriel Valley and throughout Los Angeles County.