The Ouarzazate Solar Plant in Morocco: Triumphal 'Green' Capitalism and the Privatization of Nature

Ouarzazate is a beautiful town in south-central Morocco, well worth visiting. It is an important holiday destination and has been nicknamed the "door of the desert." That is not all what Ouarzazate has to offer as its name has recently been associated with a solar mega-project that is supposedly going to end Morocco's dependency on energy imports, provide electricity to more than a million Moroccans, and put the country on a "green path." 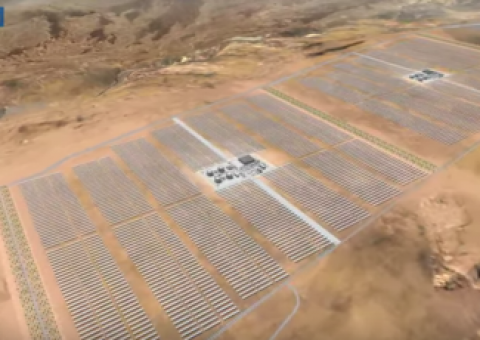 In essence, the law was bent in order to sell the land to a private entity by way of state agencies. Through this process, the government had effectively privatized and confiscated historical popular sovereignty over land and transformed the people into mere recipients of development; development they are literally paying for, provided it would one day materialize, of course.

This wholesale alienation of land for green credentials from existing claimants reflects the neoliberal restructuring of human-ecological interactions and agrarian socio-economic relations, rights, and authority. It also constitutes one aspect of "accumulation by dispossession," which is the enclosure of public assets by private interests for profit, resulting in greater social inequity (Fairhead et al. 2012).
However, the state of affairs did not go unchallenged. Encouraged by the dynamic of the 20 February Movement for radical change that emerged at the same time as the Arab Uprisings during 2011, people resisted in various ways (complaints, sit-ins, letters...). They mobilized around long-standing grievances about land, water, and the rights to benefit from economically profitable projects, such as the solar one and the mines that dotted the south of the country.
Privatizing Solar Energy: The Role of International Financial Institutions (IFIs)
About nine billion US dollars has been invested in the Noor solar power complex in Ouarzazate, much of it being private capital from international institutions such as the European Investment Bank, World Bank, African Bank of Development, l'Agence Française de Développement, KfWBankengruppe, and backed by Moroccan government guarantees (in case MASEN cannot repay).
There is no surprise regarding the international financial institutions' (IFIs) strong support for this high-cost and capital-intensive project, as Morocco boasts one of the most neoliberal(ized) economies in the region. It is extremely open to foreign capital at the expense of labor rights, and very advanced in its ambition to be fully integrated into the global marketplace (in a subordinate position, that is). In fact, Morocco was the first country in the North African region to sign a structural adjustment package (SAP) with the International Monetary Fund (IMF) in 1983. As is well documented, SAPs are responsible for wreaking economic and social havoc across the global south.

The aforementioned loans are part and parcel of the strategy of the World Bank and other IFIs for the country where they continue to reinforce and justify the core neoliberal orientation and the deepening of pro-market policies.

The World Bank has a major funding program in Morocco that covers three specific areas connected to the development of Morocco's "green" capitalism. The first of these areas is support for the government's 2008 Plan Maroc Vert (Green Morocco Plan, PMV), which sets out the country's agricultural plan for the period between 2008-2020. The PMV aims to quintuple the value of export-oriented crops by shifting land away from staple cereal crops, promoting private investment in agriculture, and removing restrictions that stand in the way of private property rights. The second major area of World Bank funding to Morocco is in support of the country's National Initiative for Human Development (INDH), which has, according to some Moroccan activists and scholars, created an artificial and non-independent civil society that helps to deepen the marketization and privatisation of the society (Hanieh 2014). The solar energy project figures in the World Bank's third focus, encompassing a range of policy developments and project-specific loans. The World Bank's disbursement levels to Morocco reached record levels in 2011 and 2012, with a major emphasis of these loans placed on promoting the use of Public Private Partnerships (PPPs) within key sectors.
As has been well documented, PPPs are only a euphemism to outright privatizations, while providing public funds and guarantees. It is essentially about privatizing profits and nationalizing the losses. The Noor-Ouarzazate complex is being built, and will be operated, as a PPP with private partner, ACWA Power International, a Saudi Arabian company. It is strange that such an arrangement has the "public" name on it when the public has no control or shares in the project. This is an entirely private venture when it comes to ownership and management and it seems that the makhzen is transferring public funds to a private company and giving guarantees to pay MASEN loans in case the latter cannot pay, at the risk of further indebting the country and leading it to bankruptcy.
The private partner is responsible for building the infrastructure, the production of energy, and its sale to the Office National de l'Électricité (ONE), with an engagement from the latter to purchase the electricity for a period of twenty to thirty years. PPPs have been extremely costly for the Moroccans, including in the energy sector, where private companies (producing more than fifty percent of electricity in the country) have benefited from generous contracts with ONE since the 1990s. Popular discontent with such companies and arrangements has surfaced recently, October 2015, for example, in huge mobilizations against the company Amendis in northern Morocco against high electricity bills. It seems that production of energy from the sun will not be different and will be controlled by multinationals only interested in making huge profits at the expense of sovereignty and a decent life for Moroccans.
Debts and the Financialization of Nature
The cost of producing energy with CSP is very high. It is at 1.62 Moroccan dirhams for the kWh (kilowatt-hour), compared to around 0.8 Moroccan dirham for photovoltaic (PV) energy. MASEN will be buying the energy from the ACWA consortium at a fixed-price of 1.62 Moroccan dirhams, and selling it at an inferior grid price to ONE, operating therefore at a loss. According to MASEN's president Mustapha Bakkoury (also former general secretary of one of the most royalist political parties, Parti authenticité et modernité, PAM), they will be operating at a loss for at least the next decade until the gap between the purchasing and sale price disappears due to inflation (note this is only speculation). To cover this loss for the next five years, they obtained a World Bank loan of 200 million dollars, deepening the dependence upon multilateral lending and foreign assistance. Several articles reported the existence of some undisclosed energy subsidies from King Mohammed VI in order to prevent the cost from being transferred to energy consumers. One article by the World Bank estimated these subsidies at 31 million dollars per year. But there is a certain ambiguity as to why these funds are needed if ONE is buying at the grid price from MASEN.
The Moroccan monarchy has framed its renewable energy plan as not only an economic development initiative, but also as a potentially export-oriented policy that would further liberalize its economy. There are also expectations that this will draw the country closer to the European Union (EU) by helping increase the percentage of renewables in the EU's energy mix. It is no coincidence that "the Moroccan government designed a new energy strategy in 2009 mostly aligned with the EU's energy trinity of energy security, competitiveness and environmental sustainability" (Beard 2013). Morocco has joined a number of global and regional renewable energy institutions and programs, including the International Renewable Energy Agency and the Solar Plan for the Mediterranean. It has also stated its interest in joining the MENA region Desertec project, and registered its renewable energy project under the Clean Development Mechanism (CDM) of the United Nations Framework Convention on Climate Change. CDM is part of what is called carbon trading and is one of the false solutions proposed to tackle climate change. CDMs were created to allow wealthier countries classified as "industrialized" to engage in emissions reductions initiatives in poor and middle-income countries, as a way of eliding direct emissions reductions. This mechanism, along with others such as REDD (Reducing emissions from deforestation and forest degradation) and different offsets participate in putting a price on nature, commodifying it under the rubric of "green capitalism". McAfee (1999) described this process as an attempt to sell nature in order to save it.
At this moment, it is not clear how much the project will earn from CDM, but one must pay attention to how this "green" trading relies on and reproduces the conventional economic notion of differential opportunity costs. In other words, that contributions to the improvement of the global environment should be sought where this is cheapest. Yet, as McAfee (2011) points out, this crucially depends upon and reinforces inequalities between poorer and wealthier landholders, between urban and rural areas, and between the global South and North.

The idea that Morocco is taking out billions of dollars in loans to produce energy, some of which will be exported to Europe when the economic viability of the initiative is hardly assured, raises questions about externalizing the risk of Europe's renewable energy strategy to Morocco and other struggling economies around the region. It ignores entirely what has come to be called "climate debt" or "ecological debt" that is owed by the industrialised North to countries of the Global South, given the historical responsibility of the West in causing climate change. Instead, debt is only legitimate in the other way and plays a role of imperialist control and subordination. As David Harvey observes, decades of easy loans and increasing indebtedness are often quickly followed by a political economy of dispossession.