labor The CTU’s Strike for Democracy

The Chicago Teachers Union’s strike today is a challenge to the rest of labor to break anti-union rules. 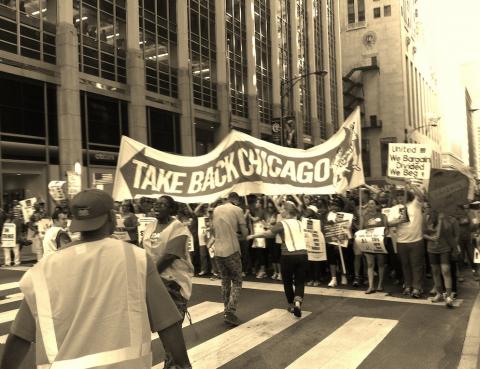 Chicago educators marching through downtown during the Chicago Teachers Union's 2012 strike.,Columbia College Graduate Study
The Chicago Teachers Union (CTU) strike today is not primarily about increased school funding, pensions for teachers, or even corporate taxation, though the union is fighting for all of these. It is a strike about democracy — about who owns our society’s resources and how decisions about those resources are made.
The CTU has shown us, once again, what real democracy looks like. Under an Illinois law designed to undercut teachers’ right to withhold their labor, 75 percent of the union’s active members must authorize a strike. The CTU met and surpassed that bar in December, with 92 percent of members voting on the issue and more than 96 percent of those casting a ballot endorsing a walkout. Then on March 23, the CTU’s representative body, the house of delegates, voted 486-124 to call a one-day strike.
Is it democratic for a union to demand that all members respect the decision to strike? Insisting on solidarity in action after a vote is taken is unusual in our society. In contrast to the cutthroat competition and dog-eat-dog individualism that capitalism cherishes, unions are based on the idea that one’s own well-being is bound up with the fate of others. Collective action depends on trust and a strong sense of shared interest, ideals that underlie democracy.
Others object that the CTU’s action is illegal — that the union is walking out over issues that aren’t, statutorily, grounds for striking. But in doing so, the union has made interpretation of its contract a political struggle rather than one fought solely in the courts.
Over the past few decades, labor unions have been seriously weakened by acceding to the rules of a political game rigged by wealthy, powerful elites. Collective bargaining, the forty-hour week, overtime, social security, union representation in the public sector — each was won through direct action. Unions had to engage in activities that were defined as illegal and cast as immoral by those who controlled business, government, and, often, religious institutions.
In addition, lamentations about students missing a day of instruction are crocodile tears given the savage budgets cuts that have hurt so many children’s education. And most parents recognize this. Although many in the media hope the strike will turn parents against teachers, it’s unlikely that communities devastated by school closings will side with the very mayor responsible for those closures. During its 2012 strike, the CTU’s support was strongest among public school parents, and has since that strike developed bonds with social justice activists, including fast-food workers and Black Lives Matter.
The Chicago Tribune‘s editorial dismissal of the CTU’s strike as a “tantrum” is a telling indication of the frustration the city’s most powerful business interests and the mayor experience in dealing with a union that won’t play the usual game of living with cuts and defeats while praying for friendly politicians to be elected.
Although Emanuel and his backers have won victories (primarily the school closings), the CTU has with each defeat developed new relationships with parents and community. Because the union has built strong support at the building level, teachers (mostly women) are not so easily cowed by threats. And few parents from communities of color buy the rationale for tax giveaways that rob the schools of needed revenue, again because the union has worked so diligently in making the political case for fair taxation that pays for school expenditures.
Chicago’s teachers are not alone in redefining the rules of engagement with governments over school funding and ownership of public education. UK teachers will soon engage in a national one-day strike, followed by local strikes throughout the summer. From South Africa to Hungary, Kenya to India, teachers, parents, and students are resisting the dismantling of public education, the process of dispossession.
What makes the CTU strike so important, though, is that it challenges the rest of US labor to break the old rules and fight alongside those most disempowered and most affected by brutal cuts and systemic injustices.
The CTU has shown that when labor forges strong connections with other unions and social justice groups — from low-wage fast-food workers to Black Lives Matter — they can still be a force for progressive change in American society. And reinvigorate democracy in the process.
Just through this weekend copies of Strike for America: Chicago Teachers Against Austerity are only $1.
If you like this article, please subscribe or donate to Jacobin.
Subscribe to Portside