We should demand that the Senate respect the nominee of the President and give him a fair hearing and a vote But we should do more: we need an ongoing grassroots movement to pressure the White House to select judicial nominees – not only for the Supreme Court but all federal courts – who would bring to the courts a greater regard for social justice as well as more racial and gender diversity. 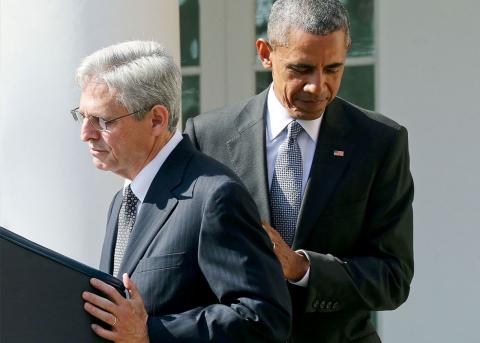 President Obama’s nomination of Merrick Garland, chief judge of the U.S. Court of Appeals for the DC Circuit and a former federal prosecutor, to the Supreme Court seat vacated by the death of Antonin Scalia was, as the pundits have noted, intended to present the Senate with a non-threatening, noncontroversial candidate to whom it would be hard to object. In the thinking of the president and his advisors, an anodyne figure such as Garland, someone without ideological baggage or a crusader image, would deprive Senate Republicans – who have vowed not to give any prospective justice nominated by Obama a hearing, much less a vote – of an excuse not to give his choice fair consideration. If Republicans are serious about leaving the Court one justice short for at least nine months, until a new president takes office – and one must believe they are – Obama, the Democratic presidential nominee and Democratic congressional candidates can use Republican intransigence as another club to batter the GOP at the polls this November.

Or so the thinking goes. No doubt Garland is the paragon of “decency, modesty, integrity, even-handedness, and excellence” that Obama says he is. Nevertheless, there is a case that Garland is the wrong nominee for the times. Here are some points to consider:

He’s a straight, white, older man – Call him a SWOM, for short. That is the demographic of which I am a member, and if we were populating the Court from scratch, I might insist on having this group represented on it. But given that of the 112 Supreme Court justices in U.S. history all but six have been SWOMs (as far as we know – at least none of the other 106 has been openly gay) – we melanin-challenged menfolk could afford to stand back until better karma is in the air. Even with the Court having become more diverse since the 1960s, it still had a SWOM majority until Scalia’s death. There were well-qualified women and minorities – including women of color – among the reputed finalists, and a 63-year-old white guy was the best Obama could come up with?

I make an issue of Garland’s age because the trend in recent decades has been for presidents to nominate relatively young justices – among incumbents, the oldest when taking office was Ruth Bader Ginsberg at 60; the youngest was Clarence Thomas at 43 – so that they could potentially serve on the court for decades, extending the influence of the president who nominated them far into the future. (Scalia, who was 49 when he joined the Court, served as “Reagan in a Robe” for more than a quarter century after his patron left the White House, and Reagan nominee Anthony Kennedy is still with us). In nominating the sexagenarian Garland – the oldest nominee since Lewis Powell in 1971 – Obama is attempting to placate Congress by sending them a nominee who probably wouldn’t be on the court as long as a younger justice would. In doing so, Obama is sabotaging his own legacy. (Perhaps in the future we might consider a sensible reform such as limiting Supreme Court justices to a single 10-year term, which would create more churn on the court and be a disincentive to the subtle ageism built into the process).

Since Republicans declared that no nominee of Obama’s would get a Senate hearing, the only advantage of nominating anyone at all would be to provide a weapon to wield in the November elections. If Obama had nominated, for instance, a strong African-American woman – U.S. District Court Judge Ketanji Brown Jackson was a reported finalist, but she was only one of many possibilities – Democrats not only could have hammered the Republicans on their intransigence, but on their hostility to women and people of color as well. That would have been a powerful call to the Democratic base to turn out to the polls en masse. Obama missed his chance.

He has no social-justice or activist background – President Obama seems to be the last remaining person to regard Supreme Court justices as impartial arbiters of the law rather than political actors. But nearly everyone else, especially Republicans in the Senate, realize that the court is a third political arm of the government. It has been so at least since John Adams, having already been defeated for re-election by Thomas Jefferson, nominated his Federalist ally John Marshall as Chief Justice, and Marshall went on to be a political thorn in the side of Jefferson and his successors for decades to come. The two current Obama-appointed justices on the Court, Sonia Sotomayor and Elena Kagan, have become reliable members of the liberal bloc, but neither took office having embraced ideological views as extreme as some Republican court nominees of the recent past, such as Scalia, Thomas, William Rehnquist and Samuel Alito (not to mention GOP nominees whose far-right views torpedoed their confirmations, including Reagan-nominated Robert Bork and failed Nixon nominees Clement Haynsworth and G. Harrold Carswell). As I argued above, given the Senate’s foot-dragging on the nomination, Obama needed to energize the Democratic base by giving them a nominee who would fight for social justice in cases likely to come before the Court on issues such as worker rights, reproductive choice, racial justice, and overturning the Citizens United decision. Instead, as legal scholar Jonathan H. Adler notes:

On the D.C. Circuit, Garland tends to write and join narrow opinions that rarely break new ground. His decisions tend to hew closely to applicable precedent and (where possible) avoid larger questions, and are generally devoid of ideological thrusts or rhetorical flourish. . .Garland also has a reputation for not being particularly sympathetic to criminal defendants, at least as compared with other appellate judges nominated by Democratic presidents.

This is truly a nominee Republican senators should love – in fact, back when Obama nominated Sotomayor and Kagan, some of them were reported to lament that Obama hadn’t nominated Garland instead. Why should progressives leap to Garland’s defense?

He is no friend of democracy for the District of Columbia – Advocates of full democratic rights for the District have no reason to cheer Garland’s nomination, since during his current tenure on the Court of Appeals he was involved in a ruling that helped derail an attempt to achieve statehood or at least voting representation in Congress – both of which DC, which is under the legislative control of Congress, lacks. Garland, sitting as part of a three-member panel, in 2000 co-authored a decision that rejected a pair of lawsuits filed by DC residents for greater local rights. One of the suits would have required Congress to grant voting representation and the other would have mandated either a path to statehood or union with another state. The third judge on the panel dissented with Garland’s dismissal of the suits. Even though the panel rejected the suits, they issue was nevertheless referred to the Supreme Court for review since it involved voting rights, but later that year the high court affirmed the panel’s ruling without a hearing.

The nomination of Garland is another attempt by Obama to appease his domestic opponents – a habit that has been the tragic flaw of his presidency. Instead of staking out a strong position and forcing the opposition to come to him, Obama anticipates the other side’s objections in advance and meets them more than halfway before negotiations have even begun. The Affordable Care Act was a case in point: He could have set forth a universal, affordable program such as a single-payer, Medicare-for-All plan as he was urged to by progressives (including Bernie Sanders) as a starting point for discussions. Instead, he anticipated Republican objections, and internalized them in proposing a watered-down proposal inspired by the Massachusetts state healthcare plan that even Mitt Romney supported. Therefore, he started talks from a weak bargaining point, and his already self-compromised plan was further watered down by Congress, including the jettisoning of the public option.

None of this is to imply that the Left should jump on an anti-Garland bandwagon. We should demand that the Senate respect the nominee of the President and give him a fair hearing and a vote. To paraphrase Donald Rumsfeld, we have to live with the nominee we have, not the one we wished we had. However, this cries out for an ongoing grassroots movement to pressure the White House to select judicial nominees – not only for the Supreme Court but all federal courts – who would bring to the courts a greater regard for social justice as well as more racial and gender diversity. But for now, we can only wonder what might have been.