On the same day that Bernie Sanders walked the picket line with CWA and IBEW unionists on strike against Verizon, he gained the endorsement on New York's Transit Workers Union. TWU Local 100 president John Samuelsen said, "Bernie Sanders has been fighting against the 'powers that be' in this country on behalf of all American workers his entire life." 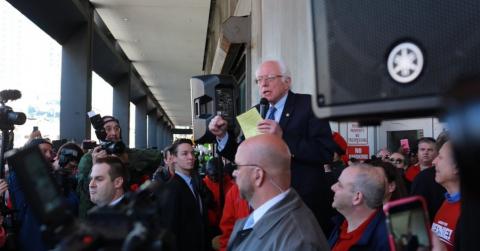 "Today you are standing up for millions of Americans. And you're telling corporate America they cannot have it all," presidential hopeful Bernie Sanders told striking Verizon workers in New York City on April 13., Bernie Sanders campaign

Presidential hopeful Bernie Sanders took a break from campaigning to join striking workers on a picket line in New York City on Wednesday after Verizon employees launched what could be the largest work stoppage the country has seen in a generation.

As Sanders approached the podium outside a Manhattan Verizon office, the striking workers erupted in cheers and chants of "Bernie! Bernie!" before the Vermont senator launched into his speech.

"Thank you for your courage in standing up for justice against corporate greed," Sanders told the crowd. "Verizon is one of the largest most profitable corporations in this country. But they refuse to sit down and negotiate a fair contract."

"They want to take away the health benefits that you have earned," he said. "They want to outsource to decent paying jobs. They want to give their CEO $20 million a year in compensation."

"And you're telling corporate America they cannot have it all," Sanders added to loud applause.

Sanders has made reforming the country's "rigged" economy a pillar of his presidential campaign. During the speech, the candidate acknowledged "what a difficult decision it is to go out on strike" given the "price" the workers' families would pay.

"But you have chosen to stand up for dignity, for justice, and to take on an enormously powerful special interest," he declared. "So on behalf of every worker in America that is facing the same kind of pressure, thank you for what you are doing. We are going to win this thing!"

Roughly 40,000 members of the Communications Workers of America (CWA) and International Brotherhood of Electrical Workers (IBEW) unions launched the strike Wednesday as Verizon employees from Virginia to Massachusetts protested the multinational's "devastating" cuts. As Common Dreams reported earlier this week, these measures include freezing pensions, slashing benefits, offshoring jobs to low-paying nations, and refusing to negotiate with workers.

In the days leading up to the strike, Sanders lambasted Verizon's "greed" and met with workers from CWA, which endorsed the senator in December.

Sanders' picket line appearance underscored his commitment to labor issues. Earlier in the day Wednesday, the candidate received the endorsement of the New York Transit Workers Union, which represents 42,000 NYC-area transit workers, and whose Executive Board voted almost unanimously (42-1) to endorse Sanders.

"In Bernie Sanders, we see a kindred spirit," TWU Local 100 president John Samuelsen said to an enthusiastic crowd of about 300 transit workers at the Brooklyn union hall. "Bernie Sanders has been fighting against the 'powers that be' in this country on behalf of all American workers his entire life. That’s what this country needs. That's what American workers need. A true champion of our cause!"

This is not the first time Sanders has joined picketing workers during his presidential campaign, having stood alongside striking workers in Iowa and a local Verizon picket in New York City last fall.

At the time, Huffington Post labor reporter Dave Jamieson noted, "[b]oth candidates have placed economic inequality at the core of their campaigns as they seek the nomination, though it's much harder to imagine Clinton walking a picket line aimed at a telecom giant."

For her part, Hillary Clinton issued a statement Wednesday in support of the workers saying that Verizon "should do the right thing and return to negotiations."

However, when it comes to policy, the two candidates have markedly different approaches to achieving labor rights.

On Tuesday, the Congressional Progressive Caucus’ leadership PAC sent a letter to both Democratic candidates calling for them to commit to passing the "Model Employer Executive Order," which as Jamieson and Huffpo colleague Sam Stein explain, "would steer government contracts toward companies that uphold strong workplace standards."

Spokesman Warren Gunnels responded, saying that "Sanders is proud to commit to this," further noting that the Vermont senator was one of 19 lawmakers who called for President Barack Obama to issue the order last May.

Alternately, the Clinton camp said the former Secretary of State "strongly shares the goal of using the tools the federal government has to encourage employers to take the high road," which the reporters described as a "wait-and-see approach."