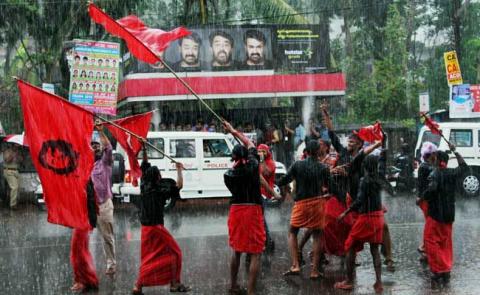 A tough political fight in the south-western Indian state of Kerala has resulted in the victory of the Left Democratic Front (LDF) in the Assembly elections — it won 91 seats in the 140 seat chamber to retake power in the state.

What were the issues that culminated in this historic victory? The parties of the LDF led important fights for wages and the living conditions of the working class and the peasantry.

Important public institutions — in charge of delivering quality education, pensions and food — have been destroyed by the Congress Party-led United Democratic Front. Corruption and cronyism of the Congress administration opened the eyes of the public. It was one thing to break popular institutions, it was wholly another to steal from the public while doing so.

Finally, the left fought hard against the fascistic Hindu right — the paramilitary National Patriotic Organisation (RSS) and ruling Indian People’s Party (BJP) — which had tried every trick in the book to win support in Kerala — but no amount of money or influence by the BJP’s headquarters worked.

Admittedly, it won a seat in the Kerala assembly — for the first time ever. It tried to consolidate the “Hindu” vote, but in Kerala other identities — class, caste — played a formidable role in blocking the fascistic parties.

The left had a key role in pushing back against the BJP at the doors of Kerala.

After the result was announced and as the Left celebrated, the RSS — the repressive “fist” of the fascistic movement — attacked the rallies with brute force. These are the tactics this close ally of India’s ruling party is prepared to resort to.

In West Bengal, meanwhile, the results for the left continue to disappoint. The Left Front governed the state between 1977 and 2006, winning six legislative assembly elections in a row. During this time, the Left Front government ushered in democracy to rural West Bengal. Land reforms, registry of agricultural workers and local self-government all became a reality.

But after 34 years in power the left lost in the historic election of 2011 — the main cause was a botched attempt at industrialisation in Singur, near Kolkata. Massive violence against the left dented the confidence of the masses who did not pick up the red flag.

Over the past five years, the left has worked to rebuild confidence, which is not an easy task. Corruption and violence by the ruling Trinamool Congress Party (TMC) had dented its reputation and it seemed like the left could make gains this election.

A decision to work alongside the Congress Party — which the LDF fought against in Kerala — in order to build up some unity against the TMC seems to have worked against it.

Despite a fresh energy among its cadres, the difficulty in winning back sections of the population that had transferred their votes to the TMC was too great. In fact, the left won even fewer seats than it did in 2011 and the leader of the Left Front, Surjya Kanta Mishra, lost his own seat, which he had held since 1991.

No-one expected the LDF to win the election outright this year largely because the rebuilding of the party following the violence it faced from the right in the countryside could not be fully achieved.

Still the breadth of the loss is a surprise. The Left Front will have to think hard about working alongside the Congress Party and much analysis is needed before a firm judgement can be made.

The Congress Party lost in both Assam and Kerala, while the BJP — the ruling party in India today — won in Assam but could not make gains elsewhere. Regional parties and the LDF emerged as the winners.

The right opportunistically claimed victory even when they did not really win the day. The Prime Minister, Narendra Modi of the BJP, thanked the Indian population, saying, “The polls have made it clear that BJP’s ideology is being accepted and appreciated.”

Modi’s henchman, Amit Shah, said that the election “results are a stamp of approval on Narendra Modi’s performance over the two years.”

This is the right’s forte, claiming victory in defeat and giving the impression it will steamroll into power. Facts don’t get in the way. It is the impression that counts. In this respect, it has learnt well from the corporate world, where the brand is more important than the commodity itself.

The left meanwhile has cause to celebrate with the Kerala victory. Much needs to be understood about the nature of the success in Kerala to see if the mood in that state can be generated elsewhere.

The left, far from being defeated as the business media suggests, is feeling the buoyancy of the Red Spring in Kerala.