Prophets of Rage’s Tom Morello: Republican National Convention Would Be Perfect Place to ‘Cause a Ruckus’

Tom Morello told Bloomberg Politics, “Well there a thing called the Republican National Convention in July and that’ll be a perfect place for a band like Prophets of Rage to cause a ruckus and we will be there on the streets in the fields and in the concert hall.” 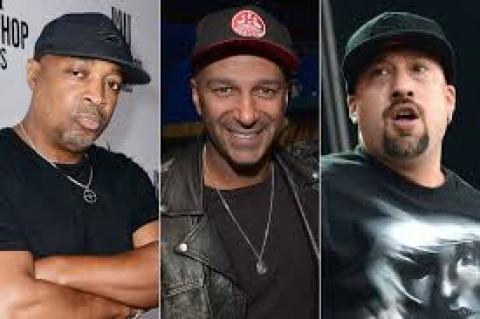 Prophets of Rage have played their first show in Los Angeles, with their second scheduled to take place Friday night (June 3) at the Hollywood Palladium, but what happens after that? Determined that their music is needed now more than ever, the collective of Rage Against the Machine’s Tom Morello, Tim Commerford and Brad Wilk, Public Enemy’s Chuck D and DJ Lord and Cypress Hill’s B-Real will take their music to where it’s needed most.

When asked about what the band was doing in July, Morello told Bloomberg Politics (in the video interview above), “Well there a thing called the Republican National Convention in July and that’ll be a perfect place for a band like Prophets of Rage to cause a ruckus and we will be there on the streets in the fields and in the concert hall.” Though he didn’t reveal exactly where they would be playing, Morello added, “We will be rocking furiously in and around the RNC.” When asked if they would play in Philadelphia [where the Democratic National Convention is being held], he added, “Anything’s possible, but right now we’re figuring it out.”

The guitarist later added, “The songs that we’ve been writing about for decades attack the system, not the individual candidates, and how we change the world, it starts around people’s kitchen tables, it starts in their classrooms, it starts wherever people are talking about a world that they want to one day see.” Meanwhile, Chuck D. added that music also affects how others in the world view you and that they’re message will spread worldwide.

Rage Against the Machine have been inactive for a handful of years, and while it’s not a full on Rage reunion, the additions of Chuck D., B-Real and DJ Lord have certainly made Prophets of Rage one of the most buzzed about bands on the music scene, regardless of genre. When asked why they returned now, B-Real stated, “There’s no music that speaks to what’s going on right now. Nothing with substance,” while Morello added, “Martin Luther King famously said there’s no hotter place in hell for people who remain neutral in times of moral conflict. This is a time of moral conflict. So we are escaping a hot pit of hell by bringing some rock and roll fury.”

Morello was also adamant that he was not thrilled with the media’s usage of the term “raging against the machine” when speaking about the campaigns of Donald Trump and Bernie Sanders. “One of the things that has irked me greatly is the way that the media has talked about the Trump campaign and the Sanders campaign as both of them are raging against the machine. We’re gonna set that record straight once and for all as to what that really means to rage against the machine,” explained Morello. “I think both those campaigns have tapped into something very, very real. People right, left and center believe that the system as it currently stands does not serve their needs. What they’re being offered up through the tiny funnel of the electoral process is a racist demagogue on the one hand and a great sort of dreamer on the other hand and in the middle is the lesser of three evils and none of those choices are good enough.”

Watch the full Bloomberg Politics video above, where you’ll see bits of the band’s performances of “Prophets of Rage,” their new song “The Party’s Over” and “Take the Power Back.” And stay tuned to see where Prophets of Rage turn up next.